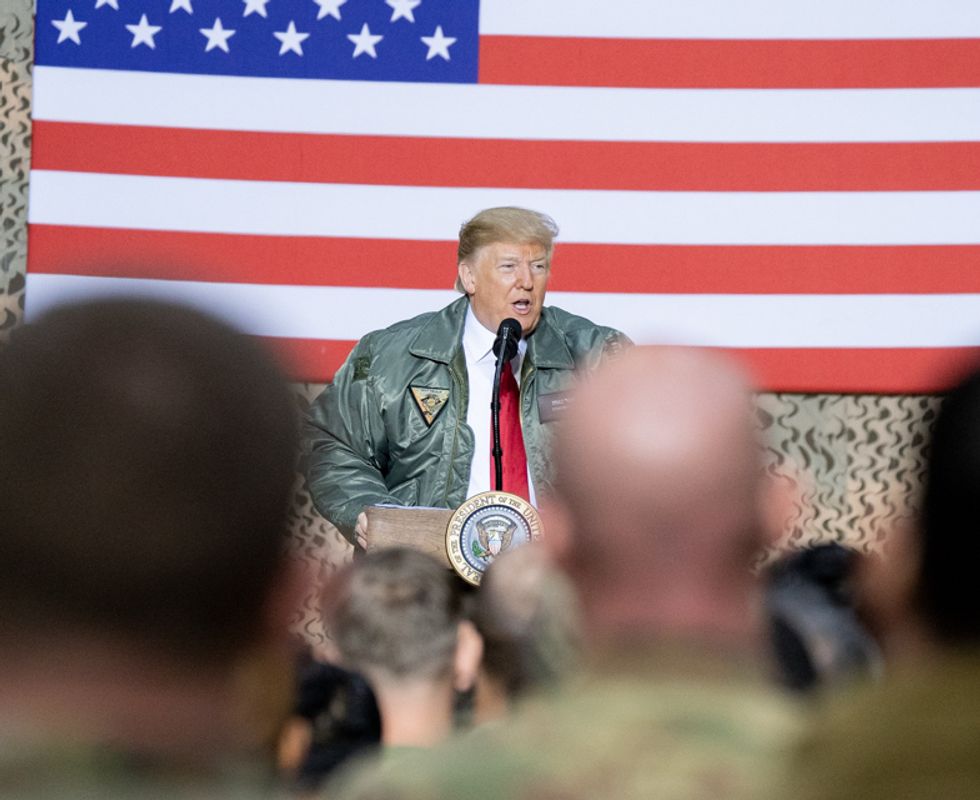 President Donald Trump doesn't actually care about having a wall on the U.S.-Mexico border.

That may sound like a strange claim, given that he's orchestrated a government shutdown in an effort to get Democrats to agree to fund the wall's construction and given that he's floating the idea of declaring a national emergency to procure these funds without Congress' approval — a move that would be a gross and highly dubious abuse of power.

But the only way to make sense of Trump's actual actions is to believe he doesn't really care about the wall. If he could accomplish his ends without it, he'd be just as happy.

According to a recent New York Times report, the wall didn't even start out as the grand promise it became in Trump's campaign. Originally, his aides got Trump to keep bringing up the wall as a "memory trick" to induce him to mention immigration in his long and meandering unscripted speeches.

And despite the fact that he pretends to be passionate about the details of the wall, it's clear he doesn't actually care about the logistics, because these details are inconsistent — and often farcical.

And whenever Trump has actually had the opportunity to push for the wall, he's botched it.

For two years, his party had control over both chambers of Congress and the White House, and he never expended serious effort to get a wall until now.

It's true Democrats had the power of the filibuster in the Senate. But Republicans found their way around that when trying to pass a health care bill (though that failed) and the tax bill (which succeeded).

And there was a moment when Democrats actually seemed willing to voluntarily vote in favor of approval wall funding. Slate's Jim Newell explained back in March 2018:

That deal has been on the table for more than a month now: Trump gives Democrats a path to citizenship for 1.8 million Dreamers; Democrats give Trump his full $25 billion wall funding request. The Trump administration balked at this clean trade when the Senate was negotiating immigration in February and again in the weeks before the omnibus. The master dealer always wanted something more, be it sharp cuts to family-based immigration or enhanced interior enforcement. Democrats were willing to blow money on Trump’s vanity project, handing him a political victory, but they were never going to secure Dreamers’ future by agreeing to the sharpest tightening of legal immigration levels in decades or selling out other undocumented immigrants.

It is confounding that Trump didn’t just take the deal. Yes, he may have gotten some heat from Breitbart over the “amnesty,” but no one reads Breitbart anymore. They would have gotten over it. And in return, he would have been able to build the wall of his dreams!

It would have been a hard pill to swallow, but Democrats would have gone for it because protecting the Dreamers is so important. But Trump didn't allow it — instead, he added on a bunch of additional contentious caveats that Democrats couldn't accept. So the deal fell apart.

The only reasonable thing to conclude is that Trump didn't actually care about getting the wall. Maybe he cared about the other immigration restrictions he fought for, who knows? But he had his chance and he blew it.

There could have been other opportunities for a deal as well. Trump could have offered the wall in exchange for other priorities of the Democrats — it didn't even need to tie into immigration. This is how you negotiate for things you actually want: You make a sacrifice on something else that you want less. Trump hasn't been willing to do that.

And in December, right before the shutdown started, Trump seemed ready once again to abandon his posturing over the wall and agree to fund the government without it. He had made a big show in a televised Oval Office meeting with the Democratic leadership that he would be "proud" to shut down the government over "border security" — but he backed down quickly.

The only reason he reversed this reversal was the sharp backlash on the right wing. Conservative firebrands and bigots like Ann Coulter and Rush Limbaugh urged Trump to go to the mattresses for the bord wall or risk losing their support. He had caved every other time in budget negotiations, but now, Democrats have control of the House of Representatives until at least the 2020 election. It was now or never, as the conservatives who actually care about the wall realized. Trump realized only too late.

Now he's put himself in an impossible situation, one that he never would have gotten himself into if he had actually mapped it out. He's clearly responsible for a shutdown that gets worse every day, and Democrats have no incentive to give in to his demands.

So if he doesn't actually care about the border wall, why is he making such a big deal about it?

Sen. Lindsey Graham (R-SC) said it best: "If he gives in now, that’s the end of 2019 in terms of him being an effective president. That’s probably the end of his presidency. Donald Trump has made a promise to the American people. He’s going to secure our border."

With Special Counsel Robert Mueller closing in and House Democrats prepared to probe deeply into his past, Trump knows he's going to need his base's support in the coming months more than ever. The base wants a wall, and Trump just wants to make them happy.