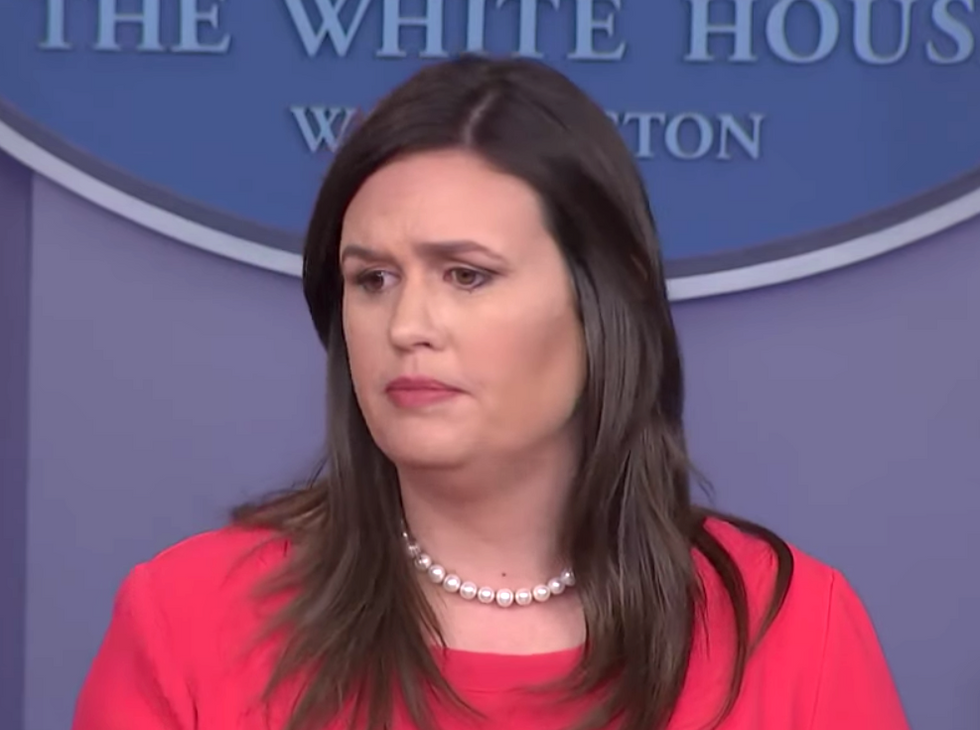 This week, White House Press Secretary Sarah Sanders held her first briefing with reporters of the new year. These sessions were once called "daily" briefings, but at this point, they're not even being held weekly. During her tenure as press secretary, the briefings have become shorter and increasingly rare, leaving the media with fewer formal venues to get direct answers about President Donald Trump's actions and priorities.

But despite this major disruption in White House press relations, the backlash to the diminished role for briefings has been muffled. While some have voiced their objections to the declining briefings, the issue hasn't turned into a major crusade, even when they have been comfortable strongly denouncing the administration's other norm-breaking behaviors.

The reason, it seems, is pretty obvious: Sanders has succeeded in making the press briefings almost entirely useless. Her answers are evasive, false, or meaningless, and they do nothing to keep reporters or the country more informed. It's often clear that she doesn't actually have the authority to speak on behalf of the president on central issues, so no one takes her claims all that seriously as it is. She has become masterful at refusing to answer questions, avoiding many of the humiliating pitfalls her predecessor Sean Spicer frequently stumbled into, while rarely committing the White House to any firm position for which it might be held accountable. With such an adept propagandist in charge of press briefings, the fact that they are so rare is hard to complain about; it's like the old joke about abysmal cafeteria meals: "The food is disgusting, and the portions are too small!"

Here are five of Sanders' rhetorical strategies to avoid any challenging questions:

One of Sanders' go-to response for tough questions — often about the latest outrage the president has engaged in or scandal that has been uncovered — is simply to declare, "I have nothing for you on that." As long as she has no answer, she can't be held accountable for anything. And while reporters could keep pressing to try and make a point, there are always other questions and topics that need to be covered in a day, so they move on.

Sanders also uses intentionally evasive language. For example, when she was asked Monday if Trump is considering a pardon for Roger Stone, his longtime friend who was just indicted in the Russia investigation,  she said, "I'm not aware of that." That's not a yes or a no — it's not a helpful answer at all, it just reflects Sanders' uninformed state of mind.

To double down on the first technique, it's often clear that Sanders is deliberately staying uninformed. If there's a big pressing issue of the day, it would presumably be her job to talk to the president about it and figure out what the White House's official comment will be on it.

But so frequently, Trump's behavior is just indefensible. When any answer she could possibly give won't fly, it's better to just not have an answer at all. Sometimes, reporters feebly ask if she will get an answer and report back, but this gambit rarely produces results. For example, on Monday, after saying she was not "aware" of Trump's thinking about a pardon for Stone, a reporter asked her to check in with the president and report back.

"I'm not going to get into that at this point, but, if need be, we'll let you know," she said, indicating that she has no interest in actually doing her job.

3. Direct questions to others

Of course, neither Sanders nor the president sticks to this principle when it's convenient for them — they only do it as a means of avoiding tough questions.

And often, the other entities have little to say. The Pentagon, in response to a question about an order from the president, may redirect the question back to the White House — a common occurrence. Rudy Giuliani, Trump's lawyer, will say a bunch of contradictory assertions that never get sufficiently clarified, and while Sanders will make broader claims about the Russia investigation being a" hoax," she won't address any specific claims. And when reporters asked on Monday about the Trump Organization's habit of repeatedly hiring undocumented immigrants — a question that goes directly to the integrity of Trump's position on one of his central issues — Sanders claimed, "I can’t get into specifics about the president’s organization outside of the White House."

While conservatives often accuse progressives of playing the victim or stoking outrage, these techniques are found across the political spectrum, and few are better practitioners of the outrage arts than Sarah Sanders.

When she was asked Monday about whether Trump really would shut down the government again in three weeks if a deal isn't reached on border security funding, she turned the question around to place the blame for any potentially negative outcome on the opposing party.

"Ideally, Democrats would take these next three weeks to negotiate in good faith, as they’ve indicated that they would, and come up with a deal that makes sense, that actually fixes the problem so we don’t have to go through that process," she said. This way, if Trump does shut down the government again, it's not his fault — it's the Democrats who refused to negotiate in "good faith."

She uses this technique a lot. When, back in December 2017, Trump sent a tweet that obviously intended to convey a demeaning sexual innuendo about Sen. Kirsten Gillibrand (D-NY), Sanders responded to the question by casting blame on those who inferred the president's malign intent.

“I think only if your mind is in the gutter would you have read it that way,” she said.

And, of course, Sanders makes frequent use of the blatant lie. Often, when presented with one of Trump ridiculous and malicious claims, she'll simply argue that he said something entirely different than what he actually said — even though he never makes the correction himself.

Or, just as commonly, she'll repeat one of Trump's lies even when it is obviously, demonstrably false. On these occasions, the press rarely calls her out to her face, probably because they're fearful of sounding too opinionated. But even if they did call her out to her face, she'd just revert to technique number four.

Because Sanders is so willing to lie for Trump, it makes it hard to take the briefings seriously at all. Of course, it's probably true that every press secretary in history has lied at some point. But for the most part, they do try to avoid it — they shade the truth, emphasize misleading facts when they think it's necessary, but they avoid directly contradicting reality. This makes their briefings informative because even if they're not telling the whole truth, these people can be relied upon to provide some information to build an accurate story around.

But for Sanders, anytime she gives the press new information, reporters should struggle to know what to do with it. Of course, she tells the truth when it suits her — but she's just as likely to tell a lie. It's the stopped clock problem — her statements may happen to be correct, but the fact that they're her statements gives you no reason to believe or disbelieve them. So when the White House decided to essentially jettison the daily press briefing, reporters, with heavy sighs, just shrugged their shoulders.