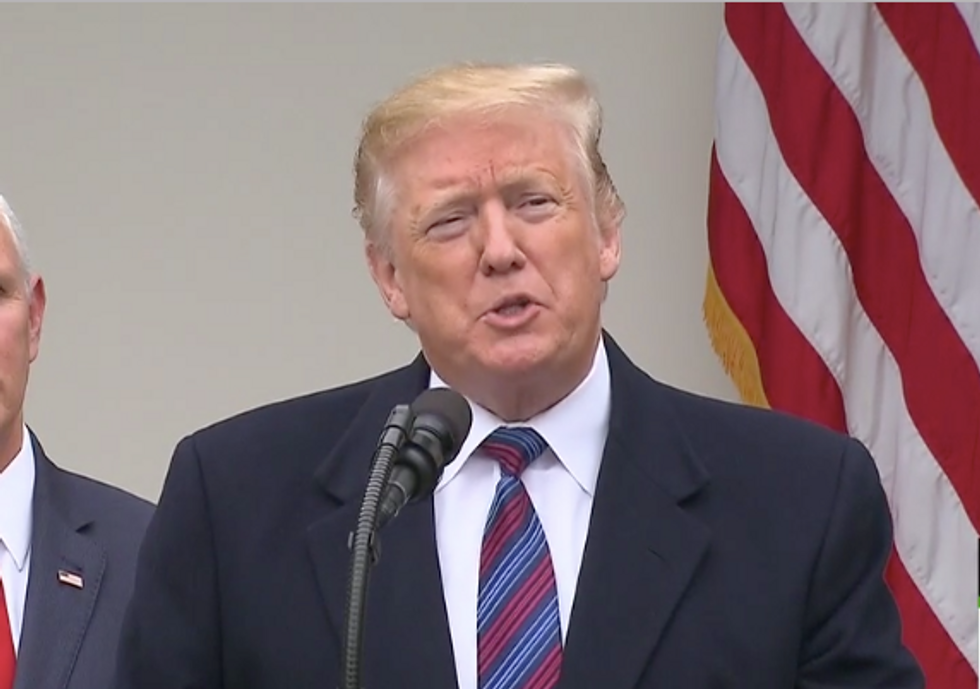 After Senate Minority Leader Chuck Schumer and House Speaker Nancy Pelosi came out of government shutdown negotiations at the White House and revealed that President Donald Trump is threatening to keep the government shut down for "years" if he doesn't get the border wall funding he has demanded, the president himself came out and painted a different picture.

Trump claimed the negotiations were "productive" — but he gave very little information about how the talks have progressed. Instead, he gave a rambling and delusional statement about the supposed need for increased border security between the U.S. and Mexico. Predictably, the statement was riddled with lies.

Here are seven of the most ridiculous claims from Trump's statement:

1. A former president told him they regretted not getting a border wall.

Trump claimed, ridiculously, that another president or possibly presidents told him that he wished he regretted not getting a border wall of the kind Trump proposed. Of course, other presidents have passed funding for barriers along the border, which is why much of the border already has fencing. There's no proof that another president hasn't made these claims to Trump, but the fact that it sounds absurd on its face and the fact that Trump has often and demonstrably completely made up facts about other people should make us comfortable declaring this an obvious lie.

2.  He said the steel industry was "almost dead" before he took office.

Trump has made this claim before — and it's just not true.

3.  Trump said that San Diego has begged him for a border wall.

"There is, again, no basis for Trump's repeated claim that San Diego begged him to build a wall there," noted reporter Daniel Dale. "Even San Diego's Republican mayor opposes the wall."

4.  Trump said that drugs don't come into the United States through ports of entry.

While Trump has often claimed that his proposed border wall would be a major impediment to drugs entering the country, there's little reason to think this is true. The Drug Enforcement Agency itself has noted that drugs most often enter the United States at ports of entry, by boat or by plane.

5. Trump said that his opponents would be happier with a steel wall than a concrete wall.

Not true. Let's just quote Nancy Pelosi: "No, no. Nothing for the wall."

Trump has, of course, repeatedly called it a "shutdown." He said he would be "proud" to shut down the government. Just the day before, he said, "The Shutdown is only because of the 2020 Presidential Election."

At one point, Trump went on a bizarre rant about how smugglers "make a right turn" at the existing border fence and then "they make a left" where the barrier ends to enter the United States. It was a delusional and childish vision of what undocumented immigration looks like.