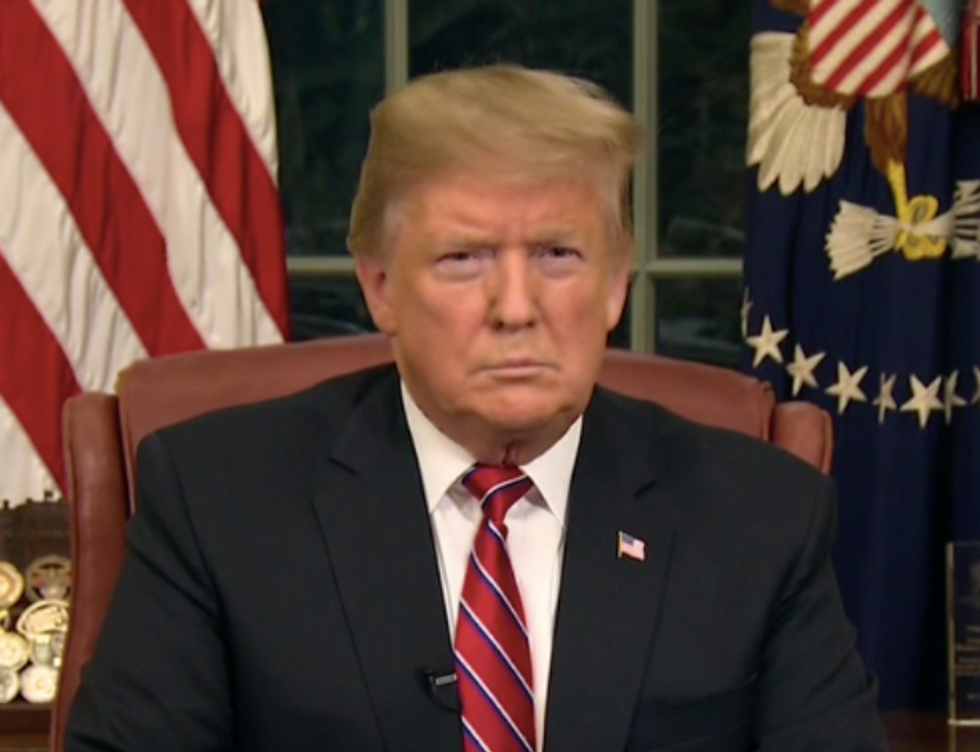 Speaking to the country for the first time from the Oval Office Tuesday night, President Donald Trump doubled down on his demands for a border wall in a brief speech amid his self-induced government shutdown

Democrats remain completely opposed to the president's proposal for a wall and arranged to respond to Trump's remarks shortly after he made them. Ahead of the speech, there was widespread debate about the TV network's decision to broadcast the speech at all, given Trump's propensity to lie and mislead about this subject in particular.

Here are five of the lies or misleading statements he made in the address:

1. Trump claimed there is a "security" crisis on the border.

While there has been an increase in children and families crossing the border seeking asylum in recent months, the rate of apprehensions of undocumented immigrants at the U.S.-Mexico border is actually much lower than it has been in recent history, as Vox's Dara Lind explained. The Trump administration's claims that there is some sort of terrorism risk from the border have been debunked. So while there may be a humanitarian crisis driving more vulnerable people to seek asylum in the United States, there is no security crisis.

One of the most common canards against immigration is the idea that illegal immigrants drive down the wages for native workers. While some economists argue this to be the case for some lower-income workers, many others disagree. But even if it's true, the impact of immigrants on wages is marginal, and it could be completely wiped out by pro-labor policies that Trump and other Republicans oppose, like raising the minimum wage and protecting unions.

3. Trump lied and said that the Democrats requested a "steel barrier."

Democrats have not requested a steel barrier. House Speaker Nancy Pelosi has said that she wants to spend exactly $0 on the wall — no matter what it's made out of.

4. Trump said the border wall will pay for itself.

Trump used to say that Mexico will pay for the wall, but since that is impossible, he has endorsed the bizarre claim that the wall will pay for itself. There's no reason to believe this is the case — especially when it's considered that the government will not only have to pay for the construction of the wall, but for any land seized to build the wall through eminent domain.

5. Trump said the new version of NAFTA will also pay for the wall.

The new version of NAFTA, which Trump calls USMCA, has some minor modifications from the original version. However, there's no plausible argument that it will somehow pay for the wall. And even if it did, it hasn't even been passed by Congress yet.