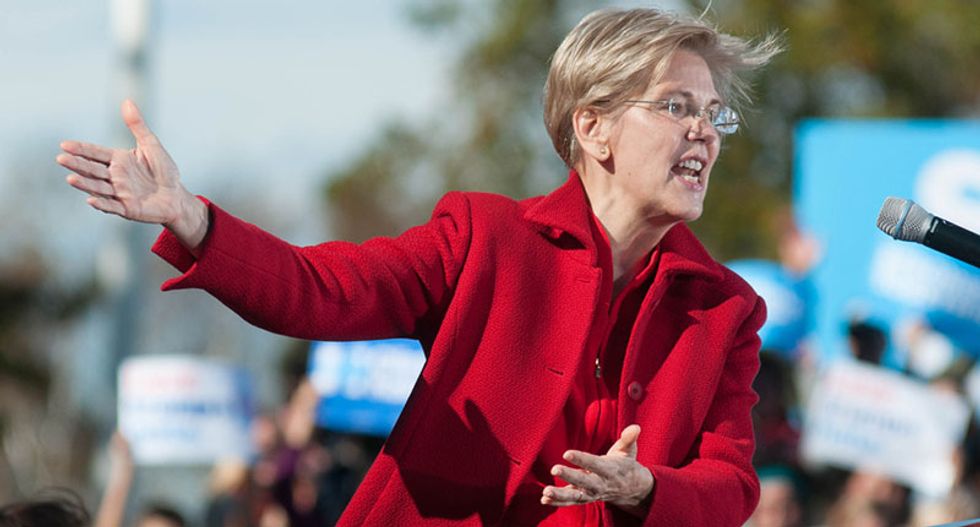 Weeks into a national conversation over the possibility of taxing the wealthiest Americans at far higher rates in order to correct severe income inequality in the U.S., Sen. Elizabeth Warren (D-Mass.) made clear that the issue will be addressed in the 2020 presidential election, unveiling a plan to tax assets over $50 million.

Two economists who are advising Warren, Emmanuel Saez and Gabriel Zucman of University of California at Berkeley, announced to the Washington Post that the senator is proposing an annual tax of two percent for assets over $50 million, as well as a three percent tax for assets above $1 billion. The proposal, the economists estimate, would raise $2.75 trillion over 10 years and would affect just .1 percent of American households—raising the percentage at which their wealth is taxed to just 4.3 percent from 3.2 percent.

Some suggested that Warren's plan represents a clear shift away from Democrats' fear of pushing to raise taxes, as progressives like Ocasio-Cortez force their colleagues to pay more serious attention to nation's crisis of economic inequality. If embraced by the party, such a proposal would certainly be an alternative to the Republican Party, which passed a $1.5 trillion tax cut for corporations and the wealthiest Americans in 2017, falsely claiming that working families would benefit from pay raises which never materialized.

Saez told the Post that Warren's is rooted in the fact that "inequality has been increasing so much, particularly in wealth, and the feeling our current tax system doesn't do a very good job taxing the very richest people."

Speaking with The Intercept, Piketty said that while the U.S. once "led the world toward the development of progressive taxation and reduction of inequality" in the last century, he is confident that Warren's proposal on taxing wealth "will not only help curb inequality and ultimately promote growth in the U.S., but also have a major impact all around the world."