DNC rules chair explains how the 2020 caucuses could change 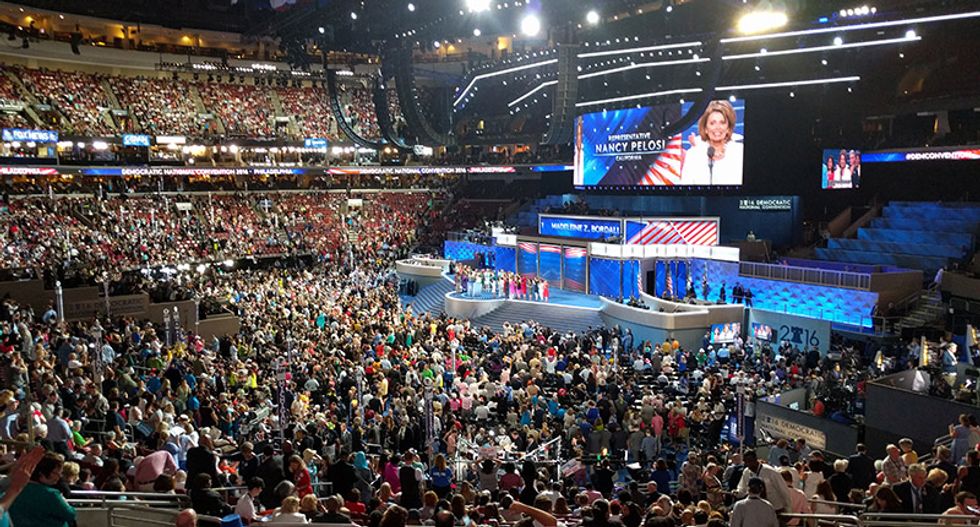 James Roosevelt III has been the co-chair of the DNC Rules and Bylaws Committee since 1995. In late December, the DNC issued its 2020 Delegate Selection Rules, which require states holding presidential caucuses, like Iowa and Nevada, to offer same-day registration and a way to participate without being present—either by mail or online. I reached out to Roosevelt about modernizing the caucus process and the challenges posed, starting with 2020’s first event in Iowa.

Steven Rosenfeld: Is it the hope that every registered Democrat and then some independents, perhaps even some Republicans, would participate in the caucuses?

James Roosevelt: As a matter of policy, we support same-day registration. So if people want to register as Democrats, at the time they are participating in a caucus, we support that. But they will have made a public declaration so they can’t just go and then vote in a Republican caucus.

SR: In Iowa, there was something like 170,000 participants in the 2016 caucuses, but 630,000 registered Democrats. Is the state party going to send everybody a vote-by-mail ballot or a link to participate online?

JR: They are not going to send a ballot proactively to everyone in the state. But they are going to take steps to publicize that people can request absentee ballots. That is a difference from the operation of primaries, where people who have registered are sent mail ballots, whether they request it or not, in some states like Oregon. State parties are not being required—they could do that if they wanted to, but I doubt that that’s likely. And they are not being required to send out mail ballots without request.

(Editor’s note: Iowa Democratic Party executive director Kevin Geiken, interviewed after Roosevelt, said the party was leaning toward online participation, not an absentee ballot. See this report. However, other caucus states could use absentee ballots, as Nebraska and Washington did in 2016.)

SR: I imagine every campaign will get the statewide voter lists and try to get everybody to request a ballot…

JR: Yup… And to the extent that they can do that, and they have then gotten people to take some step to indicate that they are committed to participating in the process, we support that.

SR: I understand—the affirmative step is the linchpin. What kind of ballot is this going to be? Is it going to be like ranked-choice voting?

JR: We discussed that at some length. That is something for the states to basically innovate their methodology on. We’re not requiring ranked-choice voting, but that would be in line with what some people call the true caucus, the Iowa-type caucus, yes.

JR: If it’s done right after each round of voting, it is not much different from counting votes—for a single round of voting and then repeating the process. What makes it seem longer and more complicated is that when you do it—as we do it in Cambridge, Massachusetts, and have for 65 or 70 years, for city council, or as they have just done in Maine—you do it after the fact. So you count the first round, and if nobody has achieved the necessary majority, then you reallocate for the second round.

If you do it after each round, the time involved is about the same as it would be for counting the votes for a regular round of voting.

SR: I’m trying to think about the paper flow here, literally—pure election administration. You have jurisdictions—towns within counties. Then you have people who are voting online, or by mail, or in person. Everything comes into a central counting location, presumably where the caucuses are held.

SR: And then there’s going to be an optical scanner for paper ballots.

JR: Let me tell you how I think about that working. And again, this is speculation, because states are going to have to innovate and figure out how they do this. But the way I think about this, you have a first round of voting in Iowa City. The people [who are there] in person vote, at least as I have seen it on C-Span, by all going to different corners of the room and so on. The organizers will also have ballots that will have come in. I think that they will need one single [counting] method.

They either need to have printed out the electronic ballots and count them on paper, or they digitize the mail ballots, and do them all that way. But they will, again, count the number one choices toward that total for the first round. What happens after the first round, as you know, is people who[se candidates] don’t reach the threshold reallocate themselves. The same thing will have to be done with the paper or digital ballots. They will have to be reallocated to number two choices.

It is possible to have a computer program to do this, because that is what we do in Cambridge. After 40 years of doing this by hand, Cambridge converted to a computerized process that does seven or eight rounds in about two hours. However, Maine, which did not spend the money on the computerized process, did it by hand. And that works too.

SR: The most efficient vote-by-mail states have central counting facilities. I called the Iowa Secretary of State office earlier today and spoke to a technician. I asked if counties auditors would work with the party to do the tabulation, and he said they have never had that precedent before. He said there are a handful of big counties with central counting facilities, but that’s not the same as localized caucus sites…

JR: Wherever the mechanics are done, it’s going to have to be broken down by each caucus district or county or precinct or however they do it.

SR: That could be expensive.

JR: Right. It is going to be either expensive or very volunteer-intensive, correct.

SR: I’m trying to think this through based on best practices I’ve seen before. Are there companies that have been identified that are doing the online piece of this?

JR: We have not really talked to those people because it is up to the states to explore what methods they want to use. I would say that we are in somewhat uncharted territory here. We might end up for the next cycle having best practices that we have learned from various states in this issue. It’s probably true that Iowa is going to be the test of this, one way or another, since they are the truest caucus operation. I know that they are thinking actively on how to do this.

SR: Because caucuses don’t involve secret ballots, is there any expectation that would apply to people voting by mail or online? I ask that because that makes the authentication process simpler.

JR: Absolutely. The same rules would apply. Those would not be secret ballots either… In Massachusetts, we don’t use caucuses for delegate selection or things like that. But we use them for our state convention for delegate selection, and again those are not secret ballots. They’re written ballots, but not secret. We don’t do this by moving to different parts of the room. We do written ballots, but they have to be signed.

SR: Elaine Kamarck, a longtime DNC member, has a book that she updates every four years about primaries and caucuses, and she emphasizes the momentum that candidates gain in the early contests. As you know, one or more of the candidates will declare victory sometime after midnight and boldly board a jet for New Hampshire. Do you think all this counting can be done in that timeframe?

JR: That’s a very good question. I think it is possible. Just because I don’t think it’s much different from counting how many people have voted in person in each round. You can add in the paper or electronic totals, I think, reasonably quickly. In fact, those can be counted while people are rearranging themselves in the room. I think it’s possible to get it done in that period of time. Whether that is done in practice or not, we’ll see.

SR: Will you require the states to do some test runs before the big show, so to speak?

JR: We are recommending test runs. We are not going to require them.

JR: Absolutely. We did test runs on electronic voting when we chose the DNC chair two years ago. The test runs were all great. When we got to it, we had to go to paper ballots because the electronic system didn’t work when everybody was online. (Laughs.) And we know, from all IT [information technology expertise], we’ll get to a point where there’s a version that really works the way we envisioned it. But it probably isn’t 1.0 or 2.0.