'Darth Trump' is pushing to turn space into a war zone 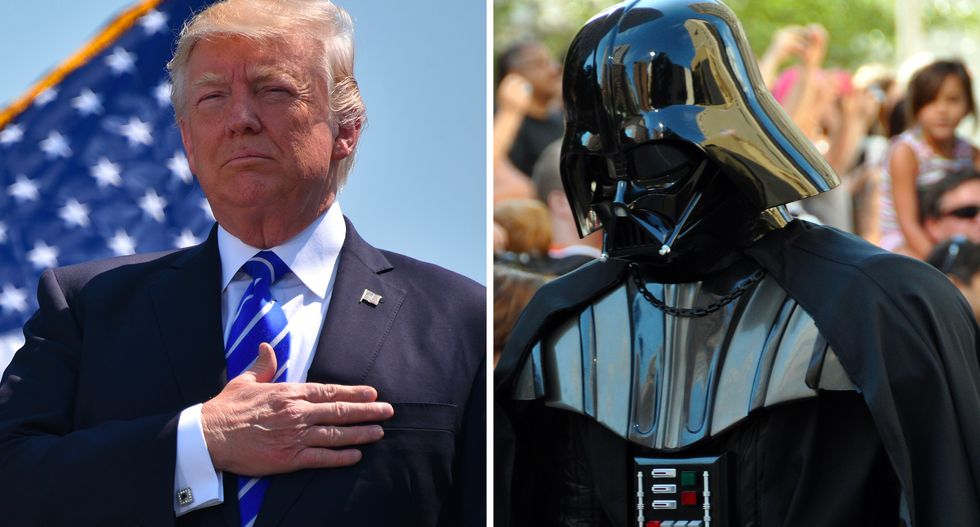 Beginning to fill in his declaration of last year about turning space into a war zone and establishing a U.S. Space Force, President Trump was at the Pentagon last week promoting a plan titled “Missile Defense Review.”

As The New York Times said in its headline on the scheme:: “Plans Evoke 1983 ‘Star Wars’ Program.”

Bruce Gagnon, coordinator of the Global Network Against Weapons and Nuclear Power in Space, called it “provocative and destabilizing and basically insane.”

As Trump stated at the Pentagon on January 17: “We will recognize that space is a new war-fighting domain with the Space Force leading the way. My upcoming budget will invest in a space-based missile defense layer technology. It’s ultimately going to be a very, very big part of our defense and obviously of our offense.”

The new United States space military plan comes despite the Outer Space Treaty of 1967 that designates space as a global commons to be used for peaceful purposes. The U.S., the United Kingdom and then Soviet Union worked together in assembling the treaty. It has been ratified or signed by 123 nations.

The release of the 100-page “Missile Defense Review” follows the Trump announcement, also at the Pentagon, in June, that he is moving to establish a U.S. Space Force as a sixth branch of the U.S. armed forces. He stated then: “It is not enough to merely have an American presence in space, we must have American dominance in space.”

The component of the “Missile Defense Review” that closely resembles the “Star Wars” program of President Reagan involves what it describes as “space-based interceptors.”

As The Times said: “In the most contentious proposal, the report embraced Reagan’s Star Wars plan of putting weapons in space to shoot down enemy missiles during ascent.” The Times also noted that “the document was careful to describe the step as largely a research project—for now.”

Of this component, the “Missile Defense Review” states: “The space-basing of interceptors also may provide significant advantages, particularly for boost-phase defense. As directed by Congress, DoD will identify the most promising technologies, and estimated schedule, cost, and personnel requirements for a possible space based defensive layer that achieves early operational capability for boost-phase defense.” 1

The Reagan Star Wars program also utilized a defense rationale—it was formally called the Strategic Defense Initiative. It was based on orbiting battle platforms with nuclear reactors or “super” plutonium systems on board providing the power for hypervelocity guns, particle beams and laser weapons. Despite its claim of being defensive, it was criticized for being offensive and a major element in what the U.S. military in numerous documents then and since has described as “full spectrum dominance” of the Earth below that the U.S. is seeking in taking the “ultimate high ground” of space.

Gagnon, whose Maine-based organization has been a world leader since its formation in 1992 in challenging the weaponization of space, said: “The new Trump space proposal is a key element in Pentagon first-strike attack planning sold to the public as 'missile defense'. The system is not actually designed to protect the U.S. from every nuclear missile launched at us—that would be a mathematical impossibility. This Star Wars system would only work as the 'shield' to be used to pick off Russian or Chinese retaliatory responses after a U.S. first-strike sword is thrust.”

He said “we know this because the Space Command,” the division of the U.S. Air Force which Trump seeks to have succeeded by a separate Space Force, “has been computer war gaming such a scenario for years—they call it the 'Red team' versus the 'Blue team.’”

“The kicker” regarding the U.S. space military plans, said Gagnon, “is that the costs would be colossal—what the aerospace industry has long said would be the 'largest industrial project in human history.’ The only way the U.S. can pay for it is by cutting Social Security, Medicare, Medicaid and by twisting the arms of NATO members to pony up more money.”

The Outer Space Treaty was spurred, as Craig Eisendrath, who had been a U.S. State Department officer involved in its creation, noted in the 2001 TV documentary that I wrote and narrate, “Star Wars Returns,” by the Soviet Union launching the first space satellite, Sputnik, in 1957. Eisendrath said “we sought to de-weaponize space before it got weaponized…to keep war out of space.” 2

It provides that nations “undertake not to place in orbit around the Earth any objects carrying nuclear weapons or any other kinds of weapons of mass destruction, install such weapons on celestial bodies, or station such weapons in space in any other manner.”

In recent decades, Canada, Russia and China have been leaders in pushing a treaty that would broaden the Outer Space Treaty—the Prevention of an Arms Race in Outer Space (PAROS) Treaty. This treaty would not only ban nuclear weapons and other weapons of mass destruction but any weapons in space. But U.S. administration after administration, Democrat and Republican, have refused to support the PAROS Treaty, thus providing a veto of its passage at the United Nations.

The new “Missile Defense Review” is explicit in how the U.S. “will not accept any limitation or constraint on the development or deployment of missile defense capabilities.”

The announcement of the new U.S. space plan came a day after the U.S. confirmed it would initiate under the Trump administration a withdrawal from another treaty, this one between the U.S. and the then Soviet Union, limiting nuclear missiles, the Intermediate-Range Nuclear Forces (INF) Treaty of 1987.

Russia is warning that the “Missile Defense Review” will fuel an arms race in space. An Associated Press story out of Russia last week reported: “The Russian Foreign Ministry described the new U.S. strategy as a proof of ‘Washington’s desire to ensure uncontested military domination in the world.’” 3

“It warned that the expansion of the U.S. missile defense system ‘will inevitably start an arms race in space with the most negative consequences for international security and stability.’”

The “’implementation of its plans and approaches will not strengthen security of the U.S. and its allies,’ the ministry said in a statement. ‘Attempts to take that path will have the opposite effect and deal another heavy blow to international stability.’”

The AP story said: “The Russian Foreign Ministry described the review as an attempt to reproduce President Ronald Reagan’s ‘Star Wars’ missile defense plans on a new technological level and urged the Trump administration to ‘come to its senses’ and engage in arms control talks with Russia.”

Meanwhile, Defense News last week questioned whether Congress will fund the “Missile Defense Review” proposals. It said that “unless Congress approves the major funding increases that will be required to make it a reality, many of those programs may fall by the wayside—and questions are emerging over whether these systems will be funded by the Democratic House of Representatives that is looking to cut defense spending.” 4

Professor Francis A. Boyle, professor of international law at the University of Illinois College of Law, who has long written about space military and weaponization issues, ties the new space plan to where the Reagan Star Wars plan got its name: “Well Lucas Films and its successors,” stated Boyle, “have done all they can to keep their Star Wars franchise alive for the past four decades and milk it for all it’s worth. And now the Pentagon will be keeping their Star Wars franchise and milking it for all its worth.”

This is being done, of course, with the zealous promotion of Darth Trump.