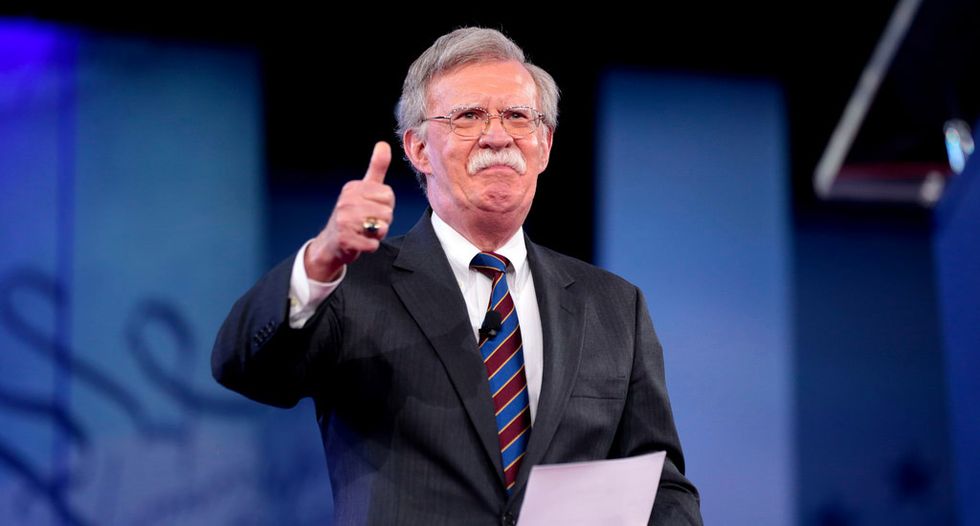 On Monday, National Security Adviser John Bolton announced a new round of sanctions against embattled autocratic Venezuelan President Nicolás Maduro, telling reporters in the White House briefing room that "all options are on the table" for President Donald Trump's administration.

But Bolton might have one preferred option in mind, based on what reporters noticed he had scrawled on his notepad at the meeting:

Venezuela is teetering on the brink of collapse. Maduro, the socialist successor to Hugo Chavez who devolved the country into a state of hyperinflation and famine, has consolidated power by taking over the Supreme Court, which then tried to dissolve the democratically-elected opposition in the National Assembly, and banned opposition leaders from his own election. The Assembly has declared Maduro illegitimate and are using a provision of the Venezuelan Constitution to remove Maduro, installing legislative leader Juan Guaidó as interim president. Thousands of protestors in Venezuela are facing off against the military in support of Guaidó and democracy.

The U.S., Canada, Australia, Israel, and much of Latin America and Europe have all either recognized Guaidó as the legitimate president of Venezuela or demanded that new elections be held. Maduro has asserted the entire conflict is a U.S.-engineered coup, which has basically been his argument every time something bad happens in Venezuela.

While there is a legal case to be made for removing Maduro, the Trump administration's approach is not confidence-inspiring. For example, for special envoy to Venezuela, Secretary of State Mike Pompeo has tapped Elliott Abrams, a neoconservative Reagan-era diplomat who has covered for brutal Central American right-wing regimes and pleaded guilty to withholding information from Congress in the Iran-Contra scandal.

Bolton writing down possible plans for troop movements on a notepad would be an embarrassing breach of national security. But if he does indeed want to station troops in neighboring Columbia, potentially setting the stage for a full-blown military intervention, that would be par for the course — he is an aggressive war hawk, having been a huge cheerleader for the Iraq war and an advocate of military intervention in Iran. Trump himself has flip-flopped on the Iraq war, but has insisted we should have taken their oil — and Venezuela also happens to possess the world's largest proven oil reserves.

The people of Venezuela deserve liberty and self-determination — but Trump's foreign policy zealots need to make sure they do not hijack the events in the country with the wrong methods or for the wrong reasons.