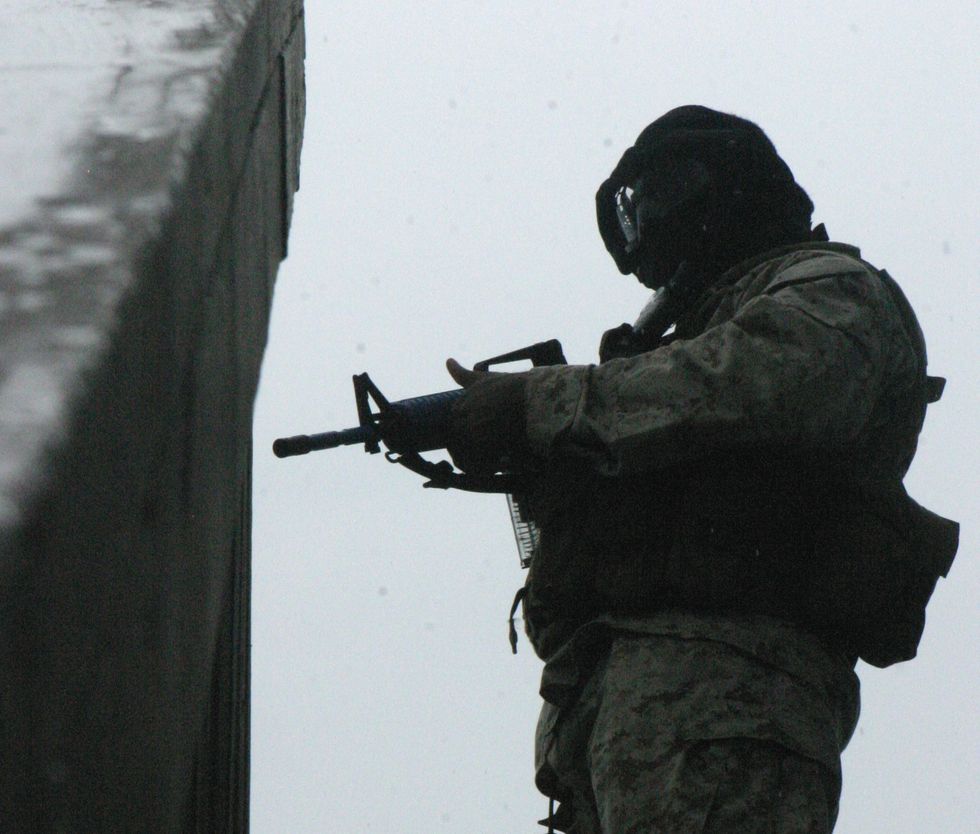 A Marine from the 26th MEU scans for danger during a training exercise, Aug. 11, 2006, Blackwater Training Center, Blackwater USA. The Marines were being evaluated on their ability to exfiltrate a VIP in combat. (Official USMC photo by Lance Cpl. Aaron J. Rock) (Released)
Alex Henderson
December 26, 2018

Last week, President Donald Trump sent shock waves through the United States military with the announcement that he would be withdrawing all U.S. troops from war-torn Syria—and on top of that, Trump is planning a substantial reduction of U.S. forces in Afghanistan.

The decision to pull out of Syria didn’t sit well with Defense Secretary James Mattis, who announced his resignation. And Trump’s announcements on Syria and Afghanistan have been followed by an ominous new ad from the former Blackwater, the militarized security company responsible for the Nisour Square massacre of 2007.

The former Blackwater, which now goes by Academi, took out a full-page ad in the January/February 2019 issue of Recoil Magazine. The ad doesn’t say much: only the words “We are coming” in all capital letters, with the militarized security company’s familiar bear paw logo at the bottom of the page. And one cannot help but wonder if the “We are coming” message is meant for Syria and/or Afghanistan.

Blackwater was founded in 1997 in North Carolina by former U.S. Navy SEAL Erik Prince—brother of the Trump Administration’s secretary of education, Betsy DeVos—and his associate Al Clark. During the Iraq War, the federal government under the Bush Administration hired Blackwater for private security operations in Iraq—and the most infamous day in the company’s 21-year history was September 16, 2007.

That day, Blackwater escorted a convoy of U.S. State Department vehicles to a meeting in Baghdad—and 17 people were killed when Blackwater mercenaries opened fire on a crowd of civilians in Nasour Square. That horrifying incident became the subject of several investigations, including one by the FBI—which determined that at least 14 of the 17 were fired upon without cause.

In August, Prince suggested that Trump remove all U.S. troops from Afghanistan and replace them with privatized military contractors. A spokesperson for the National Security Council, interviewed anonymously, told NBC News, “No such proposal from Erik Prince is under consideration.” But four months later—with Mattis’ resignation and Trump’s recent announcements of U.S. withdrawal from Syria and a major reduction of U.S. forces in Afghanistan—one cannot help but wonder what the former Blackwater has in mind for the Middle East. Are they hoping to privatize the United States’ military operations in that part of the world?

In 2009, Blackwater changed its name to Xe Services before changing it to Academi in 2011. But the notorious bear paw logo remains—and in light of the company’s infamous history and recent developments with Syria and Afghanistan, the “We are coming” ad should not be taken lightly.