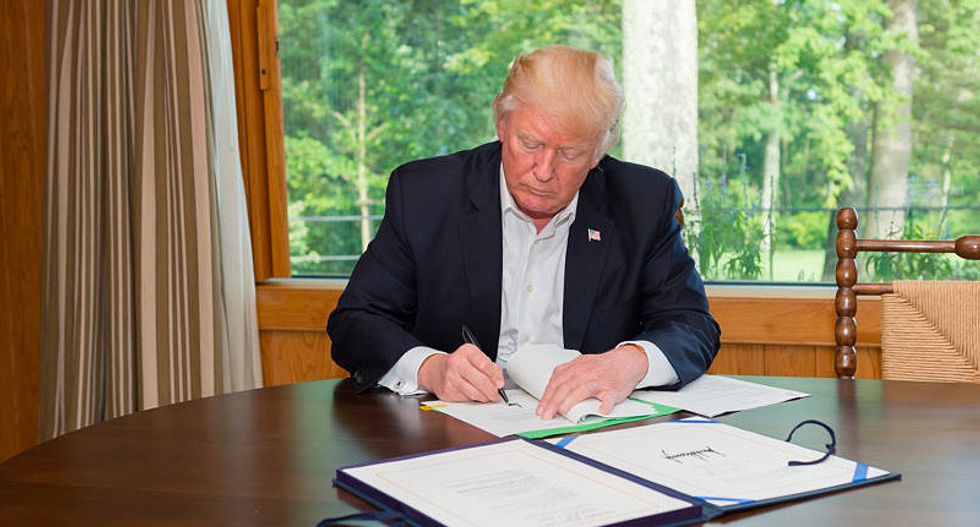 The dog whistle couldn’t have been any clearer. When Donald Trump said two weeks ago that “the people would revolt” if he were impeached, his extremist base of neo-Nazis, Klan members, right-wing militias and sympathetic service members likely heard the following: “Feel free to attack Democrats, liberals, leftists and progressives if the coming Democratic Party-run House of Representatives acts on its constitutional right to impeach me.”

Impeachment alone probably wouldn’t trigger a right-wing uprising. But impeachment followed by the unlikely prospect of removal, which requires 67 votes in the Republican-majority U.S. Senate, might well make it happen. So too could invoking the 25th Amendment on the grounds that Trump is incapable of performing his presidential duties.

Officially, the Democratic Party—led by corporate allies like Chuck Schumer and Nancy Pelosi—isn’t interested in moving ahead with either of these constitutionally available processes. That could change, however, if and when the report from special counsel Robert Mueller directly implicates Trump. But even if the party’s efforts proved successful, America would be left with President Mike Pence—an honest-to-goodness Christian fascist.

The case for Trump’s ouster grows stronger by the week. Beyond his possible obstruction of justice, criminal acceptance of foreign emoluments while in office and felonious campaign finance violations—any one of which could provide grounds for legal proceedings against him—the president has routinely embraced authoritarian rulers around the world and engaged in obvious appeals to violence. He has, at every turn, revealed himself to be entirely unfit for office.

Ironically, the most effective means of achieving his removal may be to revolt, albeit in a fashion radically different from the one the president has envisioned. America must instead engage in civil unrest that targets not just the current inhabitant of the Oval Office but the entire bipartisan ruling class that birthed his monstrous presidency. Forget Watergate; think sit-down strikes and the march from Selma to Montgomery, Ala.

The gilets jaunes (yellow vests) in France have given us a taste of what’s required. Among their list of demands is a real and functioning democracy—popular self-rule. Further to that, they have called for a referendum whereby 700,000 citizen signatories would force the French Parliament to debate and vote on a given law within one year. Evoking the French Revolution of 1789, there have even been calls for a Constituent Assembly to draft a new constitution meant to create a new French government—a Sixth Republic based on popular sovereignty and majority rule rather than the demands of a de facto corporo-financial dictatorship. Imagine!

That Trump has never had a functioning democracy to overthrow is evidence enough that this kind of activism is long overdue. Released in the early spring of 2008, Sheldon Wolin’s classic study “Democracy Incorporated: Managed Democracy and the Specter of Inverted Totalitarianism” revealed that the U.S. was no longer a “democracy,” if it ever had been. America, Wolin found, had mutated into a new sort of totalitarian regime wherein economic power and state power were conjoined and virtually unchecked by a demobilized, atomized and politically disinterested populace, conditioned to stay that way. “At best,” Wolin determined, “the nation has become a ‘managed democracy’ where the public is shepherded, not sovereign.”

“Should Democrats somehow be elected,” he prophesied, they would do nothing to “alter significantly the direction of society” or “substantially revers[e] the drift rightwards. … The timidity of a Democratic Party mesmerized by centrist precepts points to the crucial fact that for the poor, minorities, the working class and anti-corporatists there is no opposition party working on their behalf.”

Sure enough, a nominal Democrat was elected president along with Democratic majorities in both houses of Congress in 2008. What followed under Barack Obama (as under the prior Democratic administration of Bill Clinton) was standard-issue neoliberal rule in the service of big-money bankrollers and their global empire. The nation’s first black president implemented the preferred policies of Wall Street and the Pentagon more effectively than wealthy white Republicans like John McCain or Mitt Romney could have ever hoped to. America’s “inverted totalitarianism” was rebranded, to deadly effect. Fed by a widespread and easily exploited sense of abandonment and betrayal, the country’s rightward shift grew more pronounced, as the Democrats depressed and demobilized their purported base. Over a period of eight years, the party lost more than 1,000 elected offices nationwide, including the U.S. presidency.

Along the way, its power brokers managed to stamp out a progressive insurgency from Bernie Sanders through dubious means, clearing the field for a deeply unpopular candidate in Hillary Clinton. And in so doing, they handed the populist torch to a far-right reactionary in a change election.

We should expect a similar outcome from the Democrats’ presidential nomination process in 2020.  The smart money is on anti-populist Joe Biden or the telegenic faux-progressive Beto O’Rourke—this despite the continued popularity of Sanders and his progressive agenda.

One year after Hillary’s ignominious defeat, the distinguished liberal political scientists Benjamin Page (Northwestern) and Marin Gilens (Princeton) published their expertly researched book “Democracy in America?” The volume’s key finding: “The best evidence indicates that the wishes of ordinary Americans actually have had little or no impact on the making of federal government policy. Wealthy individuals and organized interest groups—especially business corporations—have had much more political clout. When they are taken into account, it becomes apparent that the general public has been virtually powerless. …”

Whether we vote or not, Mammon reigns in the United States, where, as Page and Gilens note, “government policy … reflects the wishes of those with money, not the wishes of the millions of ordinary citizens who turn out every two years to choose among the preapproved, money-vetted candidates for federal office” (emphasis added). Plus ça change, plus c’est la même chose. (“The more it changes, the more it’s the same thing.”)

Perhaps our only hope is a mass movement for “the radical reconstruction of society itself”—what Dr. Martin Luther King Jr. called “the real issue to be faced”—and the replacement of the unelected and interrelated dictatorships of capital and empire by popular sovereignty and workers’ control. As Chris Hedges wrote earlier this year:

“The Trump administration did not rise, prima facie, like Venus on a half shell from the sea. Donald Trump is the result of a long process of political, cultural and social decay. He is a product of our failed democracy. The longer we perpetuate the fiction that we live in a functioning democracy, that Trump and the political mutations around him are somehow an aberrant deviation that can be vanquished in the next election, the more we will hurtle toward tyranny. The problem is not Trump. It is a political system, dominated by corporate power and the mandarins of the two major political parties, in which we don’t count. We will wrest back political control by dismantling the corporate state, and this means massive and sustained civil disobedience. … If we do not stand up, we will enter a new dark age.” (Emphasis added.)

“A new dark age” may ultimately prove euphemistic. The original Dark Ages concluded with the planet still habitable. Humanity now faces the near-term historical threat of extinction thanks to the grave “ecological rifts” generated by a global profit system upheld by both ruling parties that is turning earth into a great, big Greenhouse Gas Chamber. “The uncomfortable truth,” philosopher Istvan Meszaros rightly argued 17 years ago, “is that if there is no future for a radical mass movement in our time, there can be no future for humanity itself.”

Sustained civil disobedience in the United States could provoke a response far bloodier than anything seen in France. But while the human costs of revolution are great, none can compare with the ecocidal rule of capital.