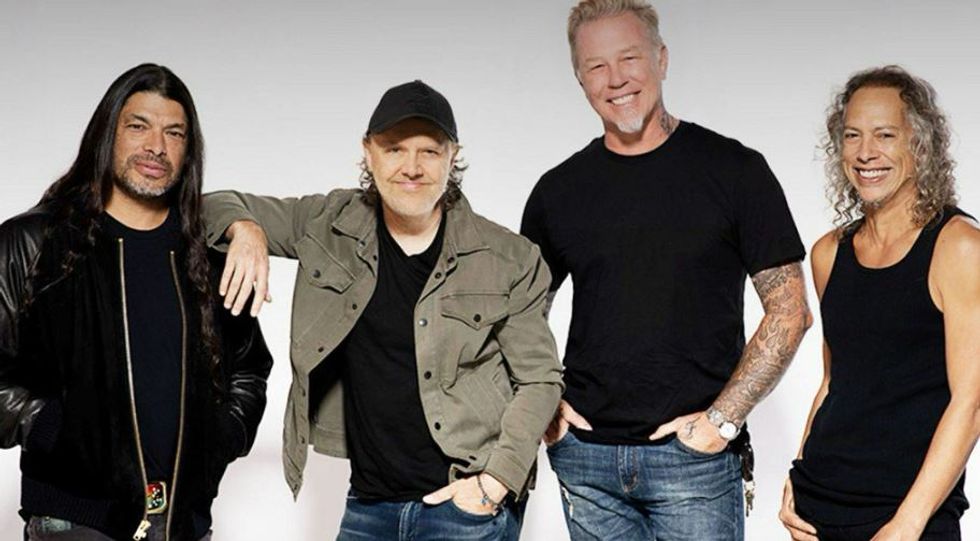 Almost 40 years after its founding, Metallica is undeniably one of the most successful bands of all time, and their previously-secret philanthropy has long matched their decades upon decades of commercial success and critical acclaim. Launched in February 2017, the metal band’s All Within My Hands Foundation “is dedicated to creating sustainable communities by supporting workforce education, the fight against hunger, and other critical local services.”

The band has long fought against hunger, but this month, they dove headfirst into their goals of supporting workforce education.

We’re really excited to announce today that we have launched a major workforce education initiative that provides direct support to community colleges to enhance their career and technical education programs. These programs provide skills and services to students who are looking to enter a traditional trade or other applied learning program. Ten colleges from across the country will receive $100,000 to support more than 1,000 students training to enter the American workforce. These students will become the first cohort of Metallica Scholars.

Partnering with the American Association of Community Colleges (AACC), a Washington, D.C.-based organization that represents the nation’s 1,103 community colleges, the Metallica Scholars awards were selected via a competitive application process and are designed to provide support of relevant job skill training for community college students, reinvest in communities that supported Metallica during its recent United States tours, and leverage the influence of Metallica to elevate the importance of career and technical education.

The AWMH press release also mentions that each college is in a city that has hosted, or will host the San Francisco-based band during their most recent tour.

Each school selected will also work closely with Metallica and the AWMH Foundation as they utilize the funds.

Here are the small schools who got those big checks!

As previously mentioned, Metallica, who were inducted into the Rock and Roll Hall of Fame in 2009, have kept their charitable work almost completely under wraps for ages, as they feared their efforts would be misconstrued as publicity stunts. It was only recently, according to founding drummer Lars Ulrich, that they opted to come forward; the reasons for the flip are unclear, but Ulrich concedes that it was possibly due to “advanced age.”

For many years, we were quite skeptical about certain elements of the charitable path that we saw some of our peers in the entertainment world take. We would at best be doubtful about the grandstanding that others often took in their efforts that ended up primarily looking like they were patting themselves on their backs and trying to steal the spotlight away from their supposed good deeds.

So for many years, Metallica gave back almost 100 percent under the radar. In cities we would play, we would work closely with food banks and not only make sure that the massive amounts of uneaten meals from the backstage catering and dressing rooms would end up in the hands of the needy, but also support these local charities with donations.

The greatest benefit, Ulrich claims, is the chance to engage their fans in the messy, beautiful work of giving back.

In every city that Metallica plays, we pick a local charity – so far mostly food banks, homeless shelters and centers for at-risk youth – and donate two dollars from each concert ticket sold to these organizations. We then blow this up on all our socials and in the local media as much as we can to encourage all our fans to participate in all possible ways.

Additionally, we are spreading the word amongst our fans, encouraging them to roll their sleeves up in their local communities and help out. Do what you can to get your hands dirty, as dirty as possible!

Forbes points out that the six-figure donation might seem small compared to the seven-figure gifts to big-name universities that so often make headlines. Thus, part of the beauty of Metallica’s partnership with the AACC is that it gives funding to schools (and students) who need it most, but rarely receive it.

That reminds me of one of the band’s most potent lyrics, from the 1982 song “Motorbreath,” which always stuck with me as a weird teenager itching to leave the Midwest in the late ‘90s.

Those people who tell you not to take chances

They are all missing on what life is about

You only live once so take hold of the chance

Don't end up like others the same song and dance

Metallica is giving folks that chance. Rock on.