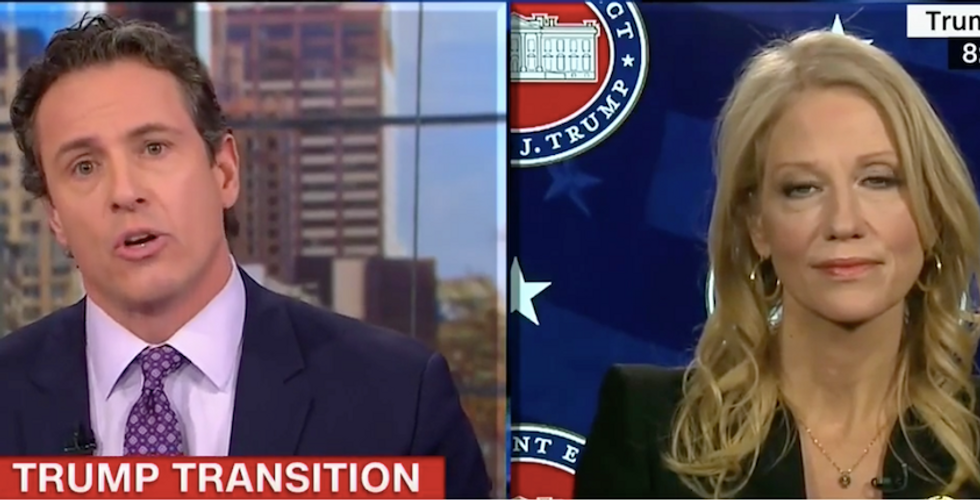 Counselor to the president and former Trump campaign manager Kellyanne Conway sat for an interview with CNN's Chris Cuomo last Thursday, and it went predictably badly. The lingering question, however, is why cable news anchors like Cuomo insist on putting themselves and their audience through such a grueling and unhelpful experience.

On Monday, Washington Post columnist Margaret Sullivan released an op-ed arguing that the time has come to simply disinvite Conway from the news circuit altogether.

"[I]t's time (actually, well past time) for the mainstream media to enter the No Kellyanne Zone. And that goes far beyond banning her, or any particular adviser, from cable interview shows," writes Sullivan. "The news media continues — even now when it should know better — to be addicted to 'both sides' journalism. In the name of fairness, objectivity and respect for the office of the presidency, it still seems to take Trump — along with his array of deceptive surrogates — at his word, while knowing full well that his word isn't good."

During the course of Cuomo's interview, Conway insisted that it wasn't until April 2018 that President Donald Trump "and everybody else were told about the payments" to Stormy Daniels and Karen MacDougal engineered on Trump's behalf by his former attorney Michael Cohen and David Pecker of American Media Inc. This was clearly a lie, as there is an audio tape of Trump discussing the payments with Cohen from 2016, and even Conway's own husband called Trump a liar shortly after that segment. Indeed, Cuomo himself ended up getting so frustrated at Conway that he instructed her to "stop lying!" Conway proclaimed that it was a "slur" to call Trump a liar, and attacked Cuomo personally, at one point even holding up a printed picture of Cuomo looking at an electoral map on election night to tried to insinuate he had pro-Hillary Clinton bias.

"No, it’s not a slur to state the facts," admonishes Sullivan. "But it is a shame to give liars a megaphone."

To Sullivan, deplatforming Conway is only a small part of the fix.

"When major news organizations publish tweets and news alerts that repeat falsehoods merely because the president uttered them, it's the same kind of journalistic malpractice as offering a prime interview spot to Kellyanne Conway," writes Sullivan. "This is how NBC News spread the news of Trump’s reaction to recent legal developments that were extraordinarily negative — maybe devastating — to him: 'NEW: "Totally clears the President. Thank you!" President Trump asserts in a tweet after new Cohen and Manafort case filings.'"

"When news organizations hand a megaphone to lies — or liars — they do actual harm. What the president himself says must be reported, of course, but only within the context of what we know," Sullivan warns. "To state it without immediate, adjacent reference to factual reality is to enter the Kellyanne Zone. In an era rife with disinformation — and American democracy teetering on a precipice — that’s the wrong place to be."