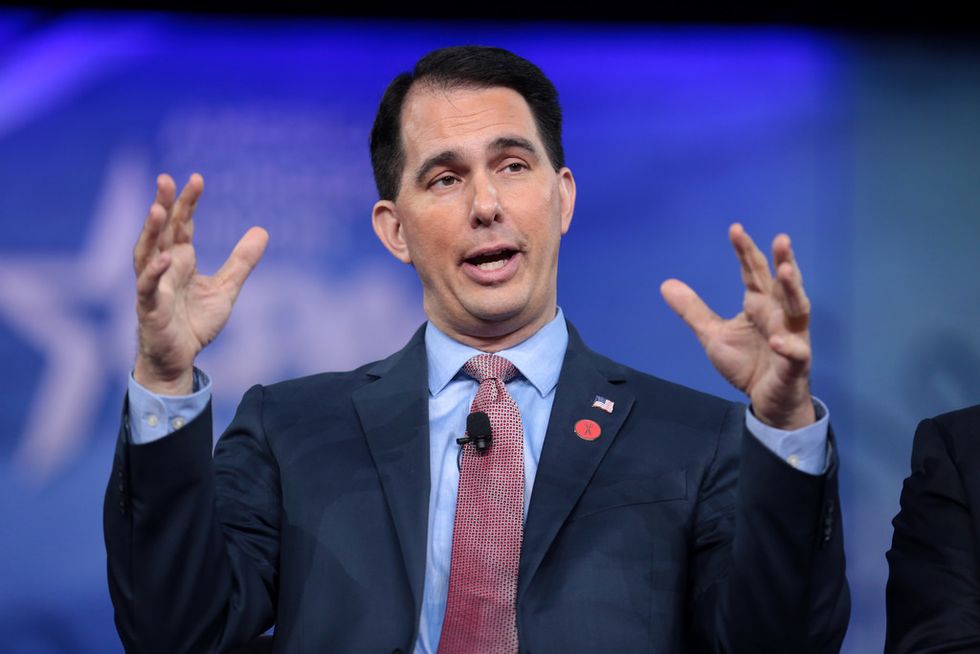 Why have democracy? It’s a straightforward question, one that any American, let alone any American politician, should be able to answer. We have democracy in this country because our most basic political principles demand that we, the people, choose those individuals who craft our laws. It’s right there in the preamble to our country’s founding document, the Declaration of Independence:

We hold these truths to be self-evident, that all men are created equal, that they are endowed by their Creator with certain unalienable Rights, that among these are Life, Liberty and the pursuit of Happiness.--That to secure these rights, Governments are instituted among Men, deriving their just powers from the consent of the governed.

There’s no point in getting all philosophical just for the sake of doing so, and I’ll talk soon enough about what Republicans are trying to pull in Wisconsin and Michigan, but let’s spend some time exploring what that venerable idea—the one about consent of the governed—really means, and why it matters.

I teach history. It’s my day job. One of my courses is an introductory survey of Western Civilization—it’s a general education requirement for students in New York’s public colleges. As the cliche goes, we do Plato to NATO in two semesters. During the first semester, we talk some about early steps toward democracy taken in ancient Greece, and during the second, we do so again when talking about the Enlightenment—whose ideas strongly influenced the men who wrote the Declaration.

On both occasions, I highlight the connection between how a society views human intellectual and moral capability—or at least the capability of those members of the society on whom political rights are bestowed—and how democratic that society is. I use a silly, oversimplified term to make my point. I call it the “moron theory of government.”

If the established values of a society see people in general as morons—i.e., people incapable of making sound choices—then that society won’t put decisions about who holds power into the hands of the people. Talking about morons with my students usually gets a smile, but the point is a serious one, namely that societies generally deny participation in the political process to those who, in the dominant view, shouldn’t be exercising it for one reason or another—or at least that’s how those who do the denying justify it.

In the overwhelming majority of large and medium-sized societies throughout history, basically everyone except the leader/monarch/chief fell into the “moron” category, and one person or a small group exercised governmental authority. Likewise, in the modern West, even the countries that were, to their credit, the most democratic at any given point in time often unfairly excluded groups such as women, racial and religious minorities, or those without property on the basis that they were, for lack of a better word, morons. For what it’s worth, today America still denies those under 18 the right to vote on roughly similar grounds.

In a true democracy, the kind of system America is supposed to be, we reject the idea that the people cannot be trusted to participate, that we are morons who must be governed by a small coterie—a group placed into high positions by some larger force who knows what is best for us. A constitutional democracy like ours is supposed to be one where those whom the people choose to exercise authority see that power as deriving from a sacred trust, and don’t see our constitutional system as something simply to be gamed.

And that brings us to what is happening in Wisconsin and Michigan this week. Prior to last month’s midterms, those states had Republican governors and Republican-controlled legislatures. Voters in both states chose Democrats in every state-wide race. However, thanks at least in part to gerrymandered districts drawn up in 2010, Republicans maintained their control over the legislatures.

Before the new Democratic governors can take office, the lame duck Republicans still have the ability to enact legislation, and that’s exactly what they are doing in Wisconsin. What is their aim? To strip powers from positions such as governor and attorney general, offices that come January will be filled by Democrats chosen by the people.

Even though it’s 2018 and not, say, 1818, Wisconsin Republicans clearly think that certain segments of the population shouldn’t have a say in that choice. State GOP leaders disparagingly dismiss Democratic victories statewide because they are powered by large majorities in “Madison and Milwaukee.”

As Emily Badger of the New York Times explained, Republicans use the names of these cities as “code words (to some, dog whistles) for the parts of the state that are nonwhite, elite, different: The cities are where people don’t have to work hard with their hands, because they’re collecting welfare or public-sector paychecks.” If you want further evidence of this kind of thinking, here’s the speaker of the Wisconsin State Assembly, Republican Robin Vos: “If you took Madison and Milwaukee out of the state election formula, we would have a clear majority.” That’s how they justify grabbing power from a Democratic-run executive branch that they were all too happy to leave in the hands of a Republican one. It is a betrayal of democratic principles.

The Republican legislature in Michigan is pulling something similar regarding the authority of the executive branch, and this after already having completely violated the will of the people of Michigan by gutting laws increasing the minimum wage and mandating paid sick leave. Republicans had passed those laws before the elections in order to prevent even better ones from going before the voters as referenda in November. That’s about as cynical as it gets, folks.

This is what Republicans are. They are the people who lie about nonexistent voter impersonation fraud so they can pass laws that disproportionately suppress Democratic votes. They are the people who then commit actual election fraud in North Carolina—another state with absurdly gerrymandered districts that give Republicans far more power than they earned based on the principle of consent of the governed. They are also the people who violated more than 200 years of precedent and refused to consider a president’s Supreme Court nominee.

In all these cases, the underlying theme is the same: They. Will. Have. Power. They don’t care what they have to do in order to seize and hold as much of it as possible. They believe they deserve it, irrespective of what the people want. You think they love the Electoral College and the Senate because, on principle, they believe small states should have a greater voice? If those two institutions suddenly gave Democrats an advantage they’d turn around and be against them faster than you can say all of George H.W. Bush’s middle names.

We, the American people, are not morons, and our collective decisions about whom we want to govern us matter. We are a democracy because we believe the people not only have the right, but the wisdom to govern ourselves.

Just power—as opposed to unjust power, exercised arbitrarily and undemocratically—flows from the people, the electorate. This is literally America 101. This week, with their post-election, lame duck power grabs in Wisconsin and Michigan, on top of what they did two years ago in North Carolina after another Democrat was elected governor, it is self-evident that Republicans failed that course of study.