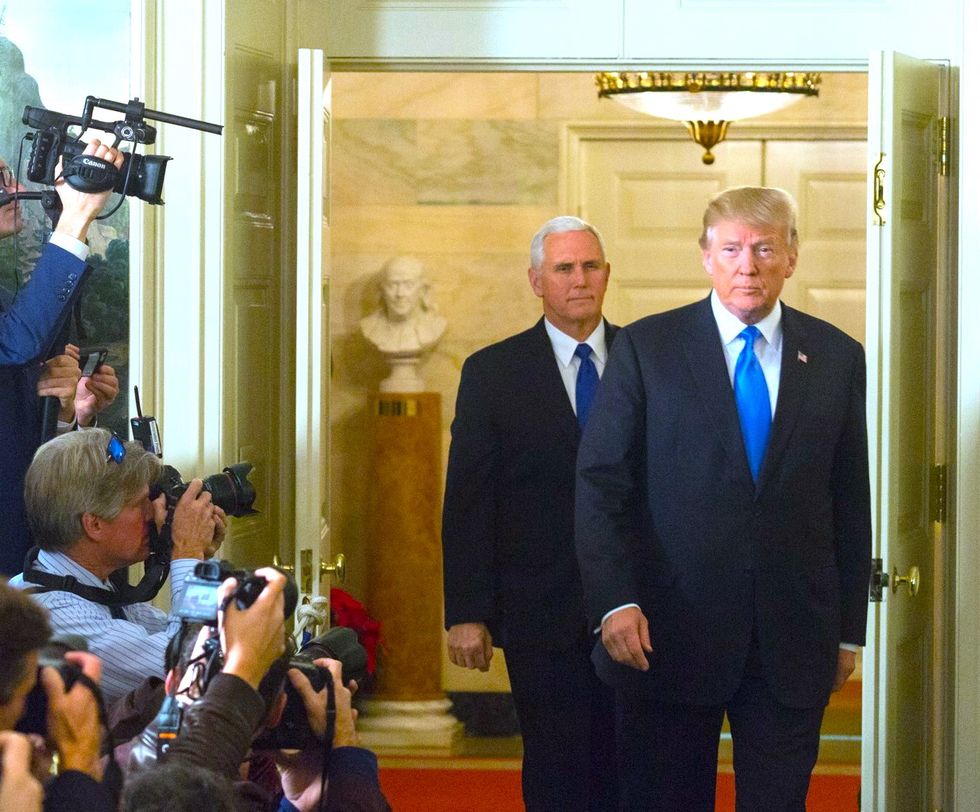 MSNBC’s Mika Brzezinski made an accurate statement when, on December 14, she told co-host Joe Scarborough—the anti-Trump conservative and former Republican congressman who co-hosts “Morning Joe” with her—that President Donald Trump has faced “an avalanche of bad legal news” in recent days. From Trump’s former personal attorney Michael Cohen being sentenced to three years in federal prison for, among other things, campaign finance violations, to American Media, Inc. (the National Enquirer’s parent company) admitting that it paid hush money to Playboy model Karen McDougal on Trump’s behalf during the 2016 election, 2018 is not ending on a favorable note for the president. And on December 13, Russian spy Maria Butina pled guilty in federal court to conspiring against the United States, admitting that she infiltrated the Republican Party and the National Rifle Association on behalf of the Russian government.

But as much as the Russiagate scandal has been heating up this month, 2019 stands to be even worse for the president. Here are five things that, from a legal standpoint, could make 2019 even more difficult for President Donald Trump and his associates.

1. A New Democratic Congress Will Be Seated in January

In the late 2018 lame duck session, Trump still has a sympathetic House of Representatives that is controlled by Republicans. But that will change in January. Democrats enjoyed a net gain of no less than 40 seats in the 2018 midterms, and with Democrats getting ready to control the House again, Trump can look forward to all kinds of investigative committees and subpoenas. In early 2019, Trump will go from having a House that is dominated by Republicans who are disdainful of Mueller’s Russiagate investigation to having a Democrat-controlled House that will be much more pro-Mueller.

The House will no doubt subpoena Trump’s tax returns in 2019, and his adversaries in the House will include Rep. Maxine Waters (nominated to head the House Committee on Financial Services) and Rep. Adam Schiff (incoming head of the House Intelligence Committee).

2. Michael Cohen Will Continue to Cooperate with Federal Prosecutors Even After Going to Prison

Cohen has pled guilty to a long list of criminal charges. In addition to the eight charges he pled guilty to on August 22 (including campaign finance violations, tax fraud and bank fraud), Cohen recently pled guilty to lying to Congress in 2017 about his role in plans to build a Trump Tower in Moscow. The August 22 guilty pleas were part of an agreement with U.S. attorneys for the Southern District of New York; the lying-to-Congress plea on November 29 was made as part of an agreement with Special Counsel Robert Mueller’s team. And even though Cohen is going to prison, his cooperation with federal prosecutors will continue.

Cohen was hoping for a lighter sentence, and because he is hoping to avoid serving the entire three years, it is in his best interests to continue cooperating with Mueller’s team as well as the Southern District of New York prosecutors. This is bad news for Trump. As the Russiagate investigation continues, Cohen will still be available to answer questions for federal prosecutors—and the more cooperative and forthcoming he is, the better his chances of not having to serve the entire three years.

Here is a Democratic name that Trump will not enjoy hearing in 2019: Letitia James, who was elected attorney general for New York State in the 2018 midterms. Her friends call her Tish, but Trump will likely be calling her an ongoing thorn in his side after she takes office in January: James has made it clear that she is planning an abundance of Trump-related investigations. In a recent interview with NBC News, James asserted, “We will use every area of the law to investigate President Trump and his business transactions and that of his family as well.”

4. Scrutiny of Roger Stone Will Continue

Roger Stone, a long-time Trump ally and GOP operative, has declared that he has no desire to flip on Trump or cooperate in Mueller’s Russiagate probe. But that doesn’t mean that Mueller won’t be investigating Stone in 2019; for that matter, U.S. attorneys for the Southern District of New York and the New York State Attorney General’s office under Letitia James’ direction will likely be paying close attention to him as well.

Mueller’s office has been investigating Stone because of his alleged knowledge of WikiLeaks’ plans to publish the hacked e-mails of the Democratic National Committee (DNC) and John Podesta (Democrat Hillary Clinton’s campaign manager) during the 2016 presidential election. The infamous hacker who stole those e-mails went by the name “Guccifer 2.0,” and Mueller believes that Guccifer 2.0 is a Russian government official based in Moscow. Stone, however, has maintained that there is no proof that Guccifer 2.0 is Russian.

5. Robert Mueller Could Become a Lot More Talkative in 2019

“Talkative” is not a word that journalists typically use to describe Special Counsel Robert Mueller, who has carefully avoided the spotlight and maintained a no-comment policy with the media during his Russiagate probe. Even when sentencing memos on Cohen and Manafort were made public by Mueller’s office on December 7, they were heavily redacted—and the redacted parts could include some major bombshells. Veteran television journalist Dan Rather, who reported on Watergate extensively back in the 1970s, has been stressing that Mueller knows a lot more than he has publicly revealed—and similarly, conservative Washington Post columnist Jennifer Rubin asserted, on December 13, “It bears repeating that the public is aware of only a fraction of the material Robert S. Mueller III is gathering.”

Despite Mueller’s silence in 2017 and 2018, his probe has led to criminal charges for Cohen, Manafort, Michael Flynn (Trump’s former national security advisor), Rick Gates (a 2016 Trump campaign aide and the star witness in Manafort’s trial last summer) and other Trump associates Rather has called a “flock of felons.” But eventually, Mueller will deliver his final report on Russiagate. And when Mueller becomes more talkative, it could very bad news for President Donald Trump and his associates.