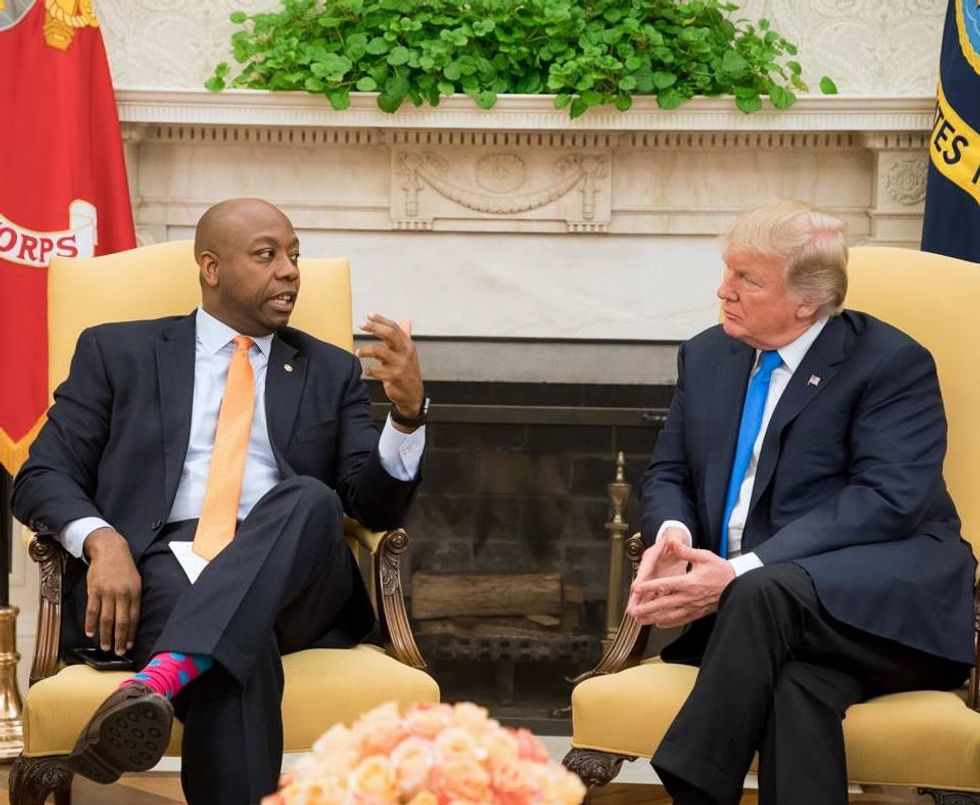 On Thursday, President Donald Trump's judicial nomination of Thomas Farr to the U.S. District Court for the Eastern District of North Carolina was dealt a humiliating blow when Sen. Tim Scott (R-SC) became the second Republican senator to announce he will vote no.

"I am ready and willing to support strong candidates for our judicial vacancies that do not have lingering concerns about issues that could affect their decision-making process as a federal judge," said Scott in a statement. "This week, a Department of Justice memo written under President George H.W. Bush was released that shed new light on Mr. Farr's activities. This, in turn, created more concerns. Weighing these important factors, this afternoon I concluded that I could not support Mr. Farr's nomination."

Scott, the only African-American GOP senator, had previously been undecided, but his vote in favor of proceeding to debate the nomination led some commentators to believe he had already made up his mind to support the nomination.

With all 49 Democratic senators opposed, Farr now lacks the majority to be confirmed. The vote was scheduled to take place this week but was delayed until next week, in an early warning sign that Senate Majority Leader Mitch McConnell (R-KY) was concerned the nomination might not survive.

This is a massive victory for civil rights, as Farr was one of the most racist nominees that Trump has put forward to serve on the federal judiciary — a particularly offensive insult, as more than a quarter of the residents of this judicial district are black, and Republicans twice blocked President Barack Obama from nominating women of color to this seat. In his capacity as an attorney, Farr has repeatedly defended state legislators' gerrymandering and voter suppression schemes, including a North Carolina voter ID law so blatantly discriminatory that a federal court ruled it targeted African-Americans "with almost surgical precision."

But perhaps the worst element of Farr's record — and the reason Scott is voting against him — is his work in 1990 for former Sen. Jesse Helms, a virulently racist lawmaker who, as part of his campaign, sent voter intimidation postcards to black voters implying that they could be arrested. Farr told the Senate Judiciary Committee, under oath, that he only worked with Helms on "ballot security" and had no knowledge of the intimidation campaign, but evidence suggests he, in fact, was aware of it.

Scott is a very conservative senator and has voted for Trump's agenda 96 percent of the time. However, he has previously expressed reservations about judges overtly hostile to civil rights. In July, Scott also opposed Ninth Circuit nominee Ryan Bounds, over a series of college writings mocking multiculturalism and diversity. He then persuaded Sen. Marco Rubio (R-FL) to pull his support as well, defeating the nomination.

Farr's nomination has been hanging in limbo for days since Sen. Jeff Flake (R-AZ) became the first GOP senator to cross the aisle and oppose it. Flake's initial reasoning was that he would oppose the confirmation of any more judicial nominees until McConnell brought a bipartisan bill protecting special counsel Robert Mueller to the floor for a vote, but he later told Washington Post reporter Sean Sullivan that he also opposes Farr's nomination on its merit.