Noam Chomsky turns 90: How the controversial activist survived to become one of the most influential anarchists in US history 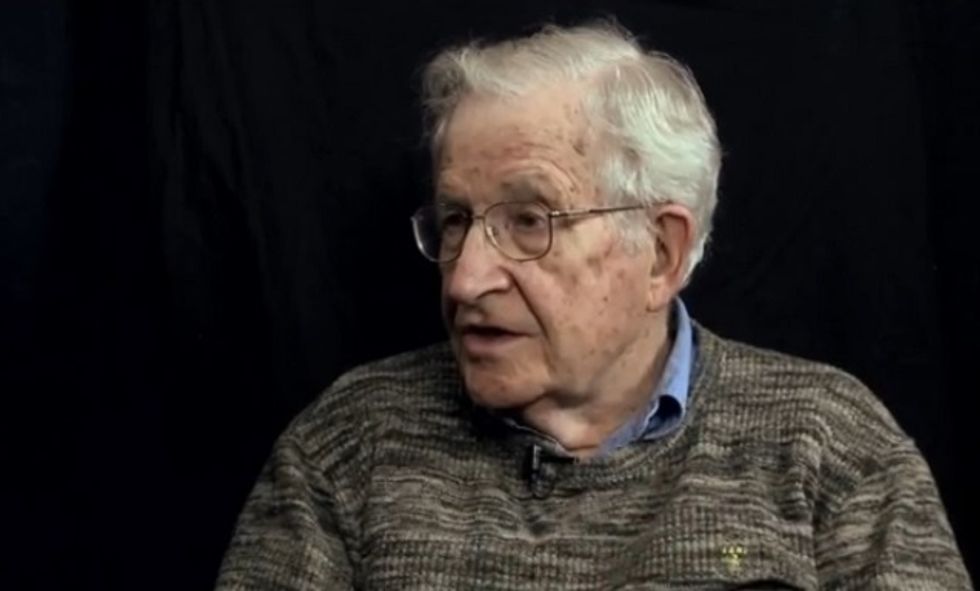 “The person who claims the legitimacy of the authority always bears the burden of justifying it. And if they can’t justify it, it’s illegitimate and should be dismantled. To tell you the truth, I don’t really understand anarchism as being much more than that.”

On December 7, 2018, Noam Chomsky turns 90 years old. In a 2013 Reader’s Digest poll of “The 100 Most Trusted People in America” (topped by Hollywood celebrities), Noam Chomsky, a self-described anarchist, ranked #20 (behind #19 Michelle Obama but in front of #24 Jimmy Carter). Given that anti-authoritarians throughout U.S. history have been routinely shunned, financially punished, psychopathologized, criminalized, and assassinated, Chomsky’s surviving and thriving are remarkable.

In the early 1960s, when few Americans were criticizing the U.S. government’s war in Vietnam, Chomsky was among the first to challenge and resist it. He risked prison time and the loss of an academic career in linguistics in which he had become highly esteemed for his groundbreaking contributions. For more than a half century, Chomsky has used his platform to challenge all illegitimate authorities, including the U.S. government and oppressive regimes around the world. He has voiced a consistent contempt for elite rule—for its atrocities as well as for its subversion of working-class autonomy.

While Chomsky abhors any hero worship—especially of himself—he does value what can be learned from human experiments in living. In this spirit, examining Chomsky’s life has value for anti-authoritarians seeking an understanding of how to survive.

Chomsky knows full well that luck has been a major factor in his beating the odds, but even great luck is not enough for a U.S. anarchist to survive and have a profound impact. Chomsky also possesses extraordinary intelligence, Spinoza-like rationality, and great wisdom about survival.

Chomsky describes his parents as “normal Roosevelt Democrats,” although some other family members were leftist radicals.

In his childhood, Noam luckily began his education at Oak Lane, a Deweyite experimental school where children were encouraged to think for themselves and where creativity was more important than grades. All schools, Chomsky believes, could be run like Oak Lane but won’t because no society “based on authoritarian hierarchic institutions would tolerate such a school system for very long.”

At Oak Lane, when he was ten, Noam published an article in the school newspaper about the fall of Barcelona to fascist forces during the Spanish Civil War—an influential event for Chomsky then and throughout his life. Later, he read Homage to Catalonia, George Orwell’s account of the Spanish Civil War and the briefly successful anarchist society in Spain.Chomsky’s early understanding that people can rise up against oppressive systems and create cooperative organization among themselves became part of the basis for his belief in anarchism as a real possibility.

At age twelve, Noam entered Central High School in Philadelphia, a highly regarded school but one that he hated, “It was the dumbest, most ridiculous place I’ve ever been, it was like falling into a black hole or something. For one thing, it was extremely competitive—because that’s one of the best ways of controlling people.” He remained in school but lost interest in it.

Similar to many intelligent anti-authoritarian young people, young Noam loathed his standard schooling. However, he had the wisdom to not equate schooling with education, and he self-educated during his adolescence. At age 13, Noam commuted alone by train to New York City to visit relatives. He spent many hours with an uncle who ran a newsstand in Manhattan on 72nd Street, which was a lively “literary political salon” where an adolescent Chomsky was exposed to radical politics and Jewish working-class culture.

At age 16, Chomsky began undergraduate studies at the University of Pennsylvania but soon, like many anti-authoritarian college students, became discouraged. Chomsky recalled, “When I looked at the college catalogue it was really exciting—lots of courses, great things. But it turned out that the college was like an overgrown high school. After about a year I was going to just drop out and it was just by accident that I stayed in.” Luckily, he connected with Zellig Harris, a charismatic linguistic professor, which resulted in Noam remaining in academia—and ultimately becoming a renowned linguist.

Chomsky’s early interests actually were political, not linguistic. He recalled, “I had, from childhood, been deeply involved intellectually in radical and dissident politics, but intellectually.” Ultimately, intellectual involvement was not enough. Chomsky tells us, “I’m really a hermit by nature, and would much prefer to be alone working than to be in public.”

What is psychologically impressive about the temperamentally introverted Chomsky is that he has actively engaged with the world. I have found that one key to those rare anti-authoritarians who triumph is their willingness to transcend their psychological comfort zone.

By his thirties, Chomsky had become a highly regarded linguist, and in the early 1960s, he became one of the first intellectuals to publicly condemn the Vietnam War. After dissent against the war widened in the United States, Chomsky modestly recounts, “I knew that I was just too intolerably self-indulgent merely to take a passive role in the struggles that were then going on. And I knew that signing petitions, sending money, and showing up now and then at a meeting was not enough. I thought it was critically necessary to take a more active role, and I was well aware of what that would mean.” For ten years, Chomsky refused paying a portion of his taxes, supported draft resisters, was arrested several times, and was on Richard Nixon’s official enemies list.

Given the potential consequence of his political stand, Noam and his wife Carol (married to Noam from 1949 until her death in 2008) wisely agreed that it made sense for Carol to return to school and get a PhD so she could support the family if he was put in prison. He later recounted, “In fact, that is just what would have happened except for two unexpected events: (1) the utter (and rather typical) incompetence of the intelligence services. . . . [and] (2) the Tet Offensive, which convinced American business that the game wasn’t worth the candle and led to the dropping of prosecutions.” Carol Chomsky ultimately secured a position at Harvard’s School of Education, and she also went on to have a successful academic career. And so with luck and wise choices, the Chomsky family had two excellent incomes and financial security.

Chomsky has also had the wisdom not to fall prey to the self-destructive tendency of some anti-authoritarian activists who deny their full humanity. Chomsky’s wisdom here is psychologically helpful for young anti-authoritarians: “Look, you’re not going to be effective as a political activist unless you have a satisfying life.” Chomsky tells audiences, “None of us are saints, at least I’m not. I haven’t given up my house, I haven’t given up my car, I don’t live in a hovel, I don’t spend 24 hours a day working for the benefit of the human race, or anything like that. In fact, I don’t even come close.” A 2003 New Yorker profileabout Chomsky quotes one of his friends: “He likes to be out of doors in the summer, he likes to swim in the lake and go sailing and eat junk food.”

Chomsky models an activist who neither denies nor self-flagellates about financial hypocrisies that are impossible to avoid in a society that requires money to survive. When employed by the Massachusetts Institute of Technology, Chomsky was candid about the reality that even though the U.S. government’s Department of Defense was not funding him directly, because the DOD was funding other MIT departments, such funding allowed MIT to pay him. “As far as the moral issue goes,” Chomsky remarked, “It’s not as if there’s some clean money somewhere. If you’re in a university, you’re on dirty money—you’re on money which is coming from people who are working somewhere, and whose money is being taken away.”

Many anti-authoritarians have great anger. This anger has resulted from social injustices and their dissent being ignored; from authoritarian assaults on them; from witnessing the marginalization of their anti-authoritarian friends; and from resentment over being forced into constant vigilance. The manner in which anti-authoritarians deal with their anger is critical to tragedy or triumph. While one can see Chomsky’s anger in his biting sarcasm, for the most part, he has not self-sabotaged with his anger. All anti-authoritarians are pained by illegitimate authorities, however, Chomsky has not compounded that pain with self-destructive or violent reactions that provide authoritarians with justification for oppression.

With both his wisdom and luck, Chomsky has more than survived to become one of the most influential anarchists in U.S. history, an inspiring model for millions of anti-authoritarians, especially young ones. He has modeled taking seriously critical thinking and truth—not mainstream credentials and official badges. The truths asserted by Noam Chomsky have been powerful challenges to authoritarian society, but perhaps even more powerful, especially for young anti-authoritarians, is his modeling of an unbroken human being.