'Most Dysfunctional Thing I've Ever Seen in My Life': Kansas GOP Blames Kobach's Incompetence For His Stunning Loss 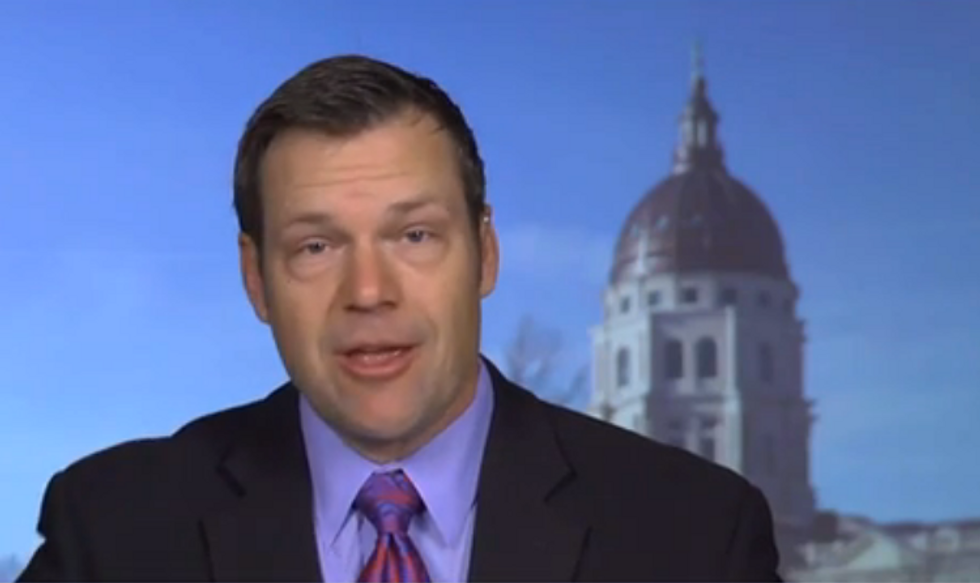 The Kansas gubernatorial election was never supposed to be a toss-up race for Republicans.

While the GOP brand in the state was badly damaged by the administration of Sam Brownback, whose cuts to taxes and public services put the state into financial disaster, Republicans outnumber Democrats in Kansas two to one, and the state went for both Mitt Romney and Donald Trump by over 20 points. It is a quintessential GOP stronghold — and the presence of independent Greg Orman in the race was supposed to pull even more votes from Democrats.

According to the Kansas City Star, a number of Republican operatives in the state put the blame squarely on Kobach's own arrogance and incompetence. He thought he was a shoo-in, and consequently spent more time showboating for the base than actually doing campaign work:

Kobach's campaign was marked by his parade appearances on a jeep with a mounted replica machine gun, a rally with rocker Ted Nugent and his fiery debate performances where he derisively compared suburban public school buildings to the Taj Mahal.

But behind the scenes is where the circus really took place.

Interviews with more than a dozen Republican strategists and officials paint a picture of a candidate who refused to listen to advice, was unwilling to put energy into fundraising and failed to set up a basic "get out the vote" operation.

Kobach, the Kansas secretary of state, struggled to pay his campaign staff on time and at one point lacked a working phone system at his Johnson County campaign office, according to GOP sources familiar with the campaign. And people who offered to volunteer were never contacted.

"It was the most dysfunctional thing I've ever seen in my life," said a long-time GOP operative in Kansas.

Kobach, it should be noted, also had plenty of baggage that went well beyond his unwillingness to invest in his campaign.

As secretary of state, he was one of the nation's most aggressive crusaders against voting rights, running a shady voter fraud commission for Trump, deploying his own personal team of prosecutors to charge people with voter fraud over innocent mistakes, creating an interstate voter registration-pruning system that jeopardized voters' personal information, and championing a "proof-of-citizenship" voter registration law that disenfranchised 36,000 people without even giving them notice. In fact, Kobach's restrictions on voting were so severe that federal judges ruled them illegal, and he ended up found in contempt of court and ordered to take remedial law classes after trying to defend these laws.

But in the end, it is clear that voter suppression was not enough to rescue Kobach. He failed to read the political climate and took his position for granted — and he paid the price for it.