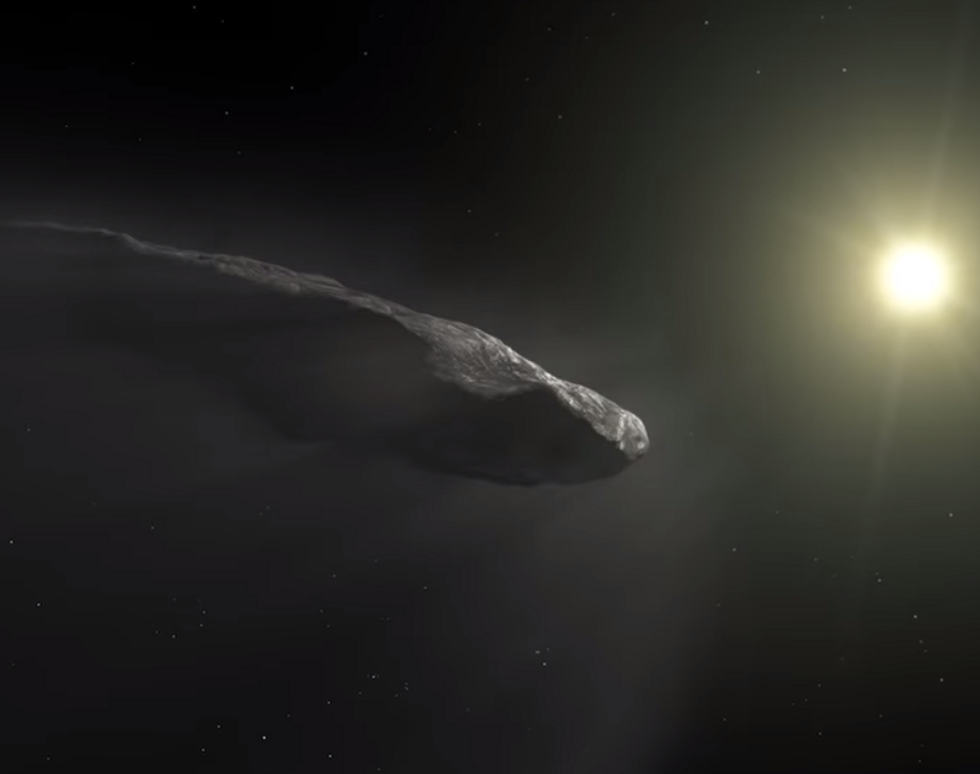 Scientists and stargazers alike were transfixed last year when ‘Oumuamua, the first object known to come from outside our solar system, passed close by our sun. Astrophysicists had long believed it was possible for such objects to exist, but none had ever been observed before.

But something strange happened. As 'Oumuanua passed by the sun, it accelerated — speeding up in a way that we wouldn't expect if it were simply being driven by the force of gravity.

A new paper from Harvard astrophysicists Shmuel Bialy and Abraham Loeb offers a startling hypothesis: It could have been an alien artifact, an actual piece of technology from an interstellar civilization.

This isn't just baseless speculation, either. The authors of the paper started with a simple idea: What if pressure from the sun's radiation caused the unexpected acceleration 'Oumunanua exhibited? Seems reasonable enough.

But for the sun's radiation to cause the acceleration that scientists observed, 'Oumunanua would have to be a very strange shape. Paul Gilster, a blogger on peer-reviewed astronomy research, explained:

We can work out constraints on the object’s area through its observed magnitude. The paper proceeds to show that a thin sheet roughly 0.3 mm thick and some 20 meters in radius will allow the non-gravitational acceleration computed in the Micheli paper.

Thus, considering the object as a thin surface, we could imagine a conical or hollow cylindrical shape. “You can easily envision that by rotating a curved piece of paper and looking at its net surface area from different viewing angles,” Loeb told me.

So let’s back up a moment. We are asking what properties ‘Oumuamua would have to have if its non-gravitational acceleration is the result of solar radiation pressure. We do not know that solar radiation is the culprit, but if it is, the object would need to be a thin sheet with a width in the range of 0.3 mm. This scenario explains the acceleration but forces the question of what kind of object could have these characteristics. A major problem is that, as mentioned above, there are too many degrees of freedom in our observations to nail down what ‘Oumuamua looks like. We did not have observations sensitive enough to produce a resolved image.

The researchers acknowledge that such an object could be the result of a natural process. However, they present another intriguing hypothesis.

They say the object could be a "lightsail floating in interstellar space as debris from an advanced technological equipment." Humans have already constructed such objects of similar dimensions, they note, and such vessels "might be abundantly used for transportation of cargos between planets (Guillochon & Loeb 2015) or between stars."

In other words, it could be "Similar to debris from ship wrecks floating in the ocean."

There's another even more exciting possibility. The authors believe it would be highly unlikely for a random piece of space debris from an alien society to simply find its way into our solar system by chance unless the galaxy were completely littered with this junk. It's not impossible, but they argue that previous calculations they've conducted suggest it's more likely that, if 'Oumuamua came from an alien civilization, it was sent on purpose

Under this hypothesis, "'Oumuamua is a targeted probe on a reconnaissance mission and not a member of a random population of objects," they write.

There is, of course, plenty of reason for skepticism. For one thing, there are plausible alternative explanations for 'Oumuamua's acceleration other than solar radiation pressure. As Davide Farnocchia at NASA’s Jet Propulsion Laboratory hypothesized:

This additional subtle force on ‘Oumuamua likely is caused by jets of gaseous material expelled from its surface. This same kind of outgassing affects the motion of many comets in our solar system.

However, this view was not entirely satisfying, either. As it passed through our solar system, 'Oumauamua did not display any sign of having a comet-like tail, which would likely accompany an object accelerating because of gaseous jets.

Frustratingly, it seems most likely we'll never get a definitive answer about what 'Oumuamua was. It has left our solar system, and it's too distant to observe now. Even while it was nearby, our imaging technology could only capture hazy pictures of the object.

So we're still mostly in the dark. But if we could confirm that an alien object had visited our solar system, we'd finally have an answer to physicist Enrico Fermi's famed paradox. He asked: Given the assumption that humans were unlikely to be a unique occurrence in the universe, and given that eons have passed since life became possible in the universe, why haven't we encountered any sign of alien life?

Perhaps we already have — we just didn't realize it at the time.