Here's why the Georgia governor’s race is far from over 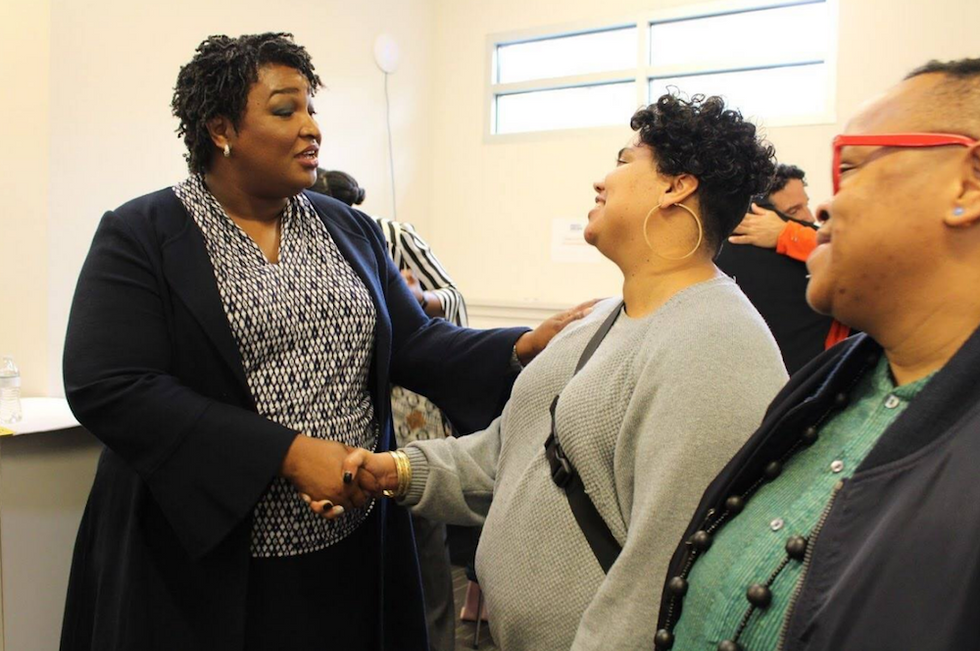 Georgia Democrat Stacey Abrams’ gubernatorial campaign Sunday filed a federal lawsuit to extend counting ballots by a day—to Wednesday—and to reexamine thousands of ballots that have been rejected for arcane technicalities.

The campaign and Georgia Democratic Party is pursuing a two-prong legal strategy to possibly force a run-off election with Republican Brian Kemp, who resigned last week as Secretary of State and leads by 59,000 votes. That runoff would occur if Kemp falls below 50 percent of votes cast.

The litigation's first prong is to extend the vote counting period by one day, as votes keep coming in despite reports by counties that they had completed their count. Currently, all counties are to report their results to the state on Tuesday, which, in turn, planned to announce the official winners on Wednesday. Abrams' lawsuit hopes to delay that process by 24 hours.

The legal strategy's second prong is forcing county election officials to re-examine two categories of votes. First are provisional ballots issued to voters whose names were not in precinct poll books—for many reasons, such as the state's voter registration database did not use the most recent addresses submitted by those voters when updating their state drivers' licenses. (Under federal law, those addresses are to be used for voter registration). The second category is mailed-in absentee ballots that had been rejected due to how envelopes were signed and dated by registered voters.

Increasing the pool of votes to be counted could prompt a gubernatorial recount or runoff. In the past two days, Abrams has seen the distance between her and Kemp shrink. On Friday, Groh-Wargo said Abrams needed to pick up 26,000 more votes to trigger a runoff and 23,000 additional votes for a recount. But by Sunday, those thresholds were 21,000 more votes for a runoff and 19,000 for a recount.

Those shrinking margins come from several ballot categories, the campaign manager explained, saying the campaign believed that there were 26,000 outstanding uncounted ballots—in addition to 2,684 military and overseas ballots sent out and not yet added to unofficial totals (the number returned may be less), and 5,000 or more rejected absentee envelopes with uncounted votes inside.

“It’s additional Election Day, early votes and mail votes,” said Groh-Wargo, speaking of the 26,000 uncounted figure. “That’s what came through yesterday [Saturday]. There were almost 6,000 new votes that were reported yesterday. Of those new votes, the majority were additional votes from places that we had thought were 100 percent reported.”

“So there’s this just unknown X-number of votes that the counties may have rushed through on Election Night; that they are still counting and moving in [to unofficial totals]. And 1,000 came out of Fulton County, for example,” she said. “That’s sort of the unknown number that continues to surprise us that came through yesterday.”

Groh-Wargo also said there may be more than 5,000 ballots to count in the rejected absentee ballot category, which their federal lawsuit hopes to reactivate.

“We have data from SOS [the Secretary of State office] of rejected ballots,” she said. “They have not continued to update it for many days. And we don’t think their data is 100 percent reliable. But it’s 5,147 [rejected ballots] as of the eighth [of November].”

All told, these figures suggest that as more votes are counted the margin that separates Abrams and Kemp will continue to narrow. Beyond the litigation, Abrams has been making selective appearances with thwarted voters—to emphasize the human dimensions of voter suppression in her state.

“I am fighting to make sure our democracy works for and represents everyone who has ever put their faith in it. I am fighting for every Georgian who cast a ballot with the promise that their vote would count,” she said on Facebook, highlighting her meeting with the suppressed voters who told their stories at a Friday press conference. (Their testimonials were posted below Abrams’ statement).

“I met with Tate, Cassandra, Nedghie, Angel, Surabhi, Delaney, Cazembe, Amari, and Arnaud – Georgia voters from all walks of life who experienced difficulty casting their ballots or helped those who were having trouble,” Abrams said. “Whether they were first time voters, volunteers, or elected officials, they all felt dismayed and disillusioned by a democracy whose hurdles and failures made it nearly impossible to vote. Some were only able to vote through tenacity and sheer force of will. Many were left voiceless.”

The testimonials support the basic legal argument that eligible and legal voters did what they believed was required to vote, but state actions, for whatever reason, blocked them from voting or their votes from being counted.

“We heard stories from voters who took time off work to vote, only to be turned away at their assigned polling precinct and every polling place they visited,” Abrams said. “Students and military service members who requested absentee ballots, but their ballots never arrived or their completed ballots were ‘lost in the mail.’ First time voters and long-time voters whose names were ‘no longer on the list.’ Their voices deserve to be heard. They deserve justice. And that is why we will continue this fight.”