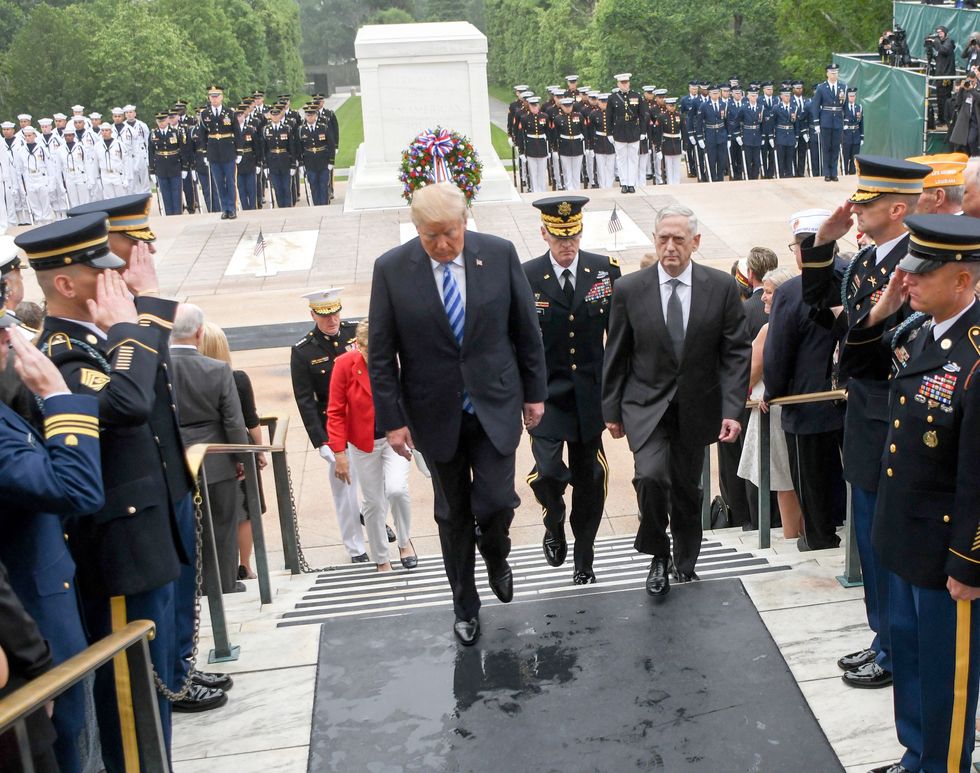 President Donald J. Trump lays a wreath at the Tomb of the Unknown Soldier during a Memorial Day ceremony with Secretary of Defense James N. Mattis and Chairman of the Joint Chiefs of Staff Marine Gen. Joseph F. Dunford Jr., at Arlington National Cemetery in Arlington, Va., May 28, 2018. (DoD photo by Army Sgt. Amber I. Smith)
Alex Henderson
and
AlterNet
November 21, 2018

Whenever John Dean, Jill Wine-Banks, Dan Rather or Carl Bernstein are asked to discuss President Donald Trump’s controversies on CNN or MSNBC, a word that inevitably comes up is “Watergate.” Wine-Banks was a Watergate prosecutor in the 1970s, while Rather and Bernstein reported on Watergate extensively as journalists—and Dean served as White House counsel under the Richard Nixon Administration. Dean and Bernstein appeared together on CNN on November 20, discussing the revelation that Trump urged the Department of Justice to pursue criminal charges against Democrat Hillary Clinton and former FBI Director James Comey.

Dean told CNN, “If I had to channel a little of Richard Nixon, I think he’d tell this President he’s going too far. This is the sort of stuff of a banana republic….This is a level Richard Nixon never went to, where you went after somebody’s personal well-being by a criminal prosecution.” And Dean didn’t get any argument from fellow Watergate-era veteran Bernstein, who denounced Trump’s actions as exemplary of his “abuse of presidential power” and his “embrace of authoritarianism.”

Certainly, “banana republic” are strong words, but in Trump’s case, they are appropriate. Here are five ways in which President Trump has conducted himself like the leader of a corrupt banana republic.

1. Relentless Demonizing of the Press

In a democratic republic, the press is meant to serve as an aggressive watchdog—and most U.S. presidents have understood that, even when they felt the press was being unfair. President Barack Obama was visibly annoyed at Fox News at times, but he respected their 1st Amendment rights and realized that he wasn’t exempt from the media’s scrutiny. Trump, however, has repeatedly denounced the press as the energy of the people—even when CNN reporters were receiving death threats, even after the murder of Washington Post columnist Jamal Khashoggi. CNN reporter Jim Acosta, whose White House press credentials were revoked after the midterms, never received death threats before Trump’s presidency—now, Acosta has noted, he receives them regularly.

In democracies, even sitting presidents are not exempt from the rule of law—which is why President Richard Nixon probably would have been removed from office via the impeachment process had he not resigned on August 8, 1974 (Trump faced articles of impeachment in the House of Representatives, but he stepped down before a Senate trial could come about). Trump, however, views himself as exempt from the scrutiny of the U.S. Justice Department. Furious with Attorney General Jeff Sessions for recusing himself from Special Counsel Robert Mueller’s Russia-related investigation, Trump fired him after the 2018 midterms and replaced him with loyalist Matt Whitaker—who just happens to be an outspoken opponent of the investigation. This is very much the type of corrupt behavior one would expect from the leader of a banana republic.

Trump not only promotes blatant voter suppression in predominantly non-white areas that are more favorable to Democrats than Republicans—he also favors voiding election results that he disagrees with. Requesting a recount is perfectly legitimate; in the 2018 Florida Senate race, Democratic Sen. Bill Nelson wouldn’t concede to Gov. Rick Scott without a recount. But when the recount showed a narrow victory for Scott, Nelson conceded defeat. Trump, however, wanted to throw out the election results in the 2018 Arizona Senate race when Democrat Kyrsten Sinema narrowly pulled ahead of Republican Martha McSally.

On November 8, Trump tweeted, “Just out — in Arizona, SIGNATURES DON’T MATCH. Electoral corruption - Call for a new Election? We must protect our Democracy!” There was no evidence whatsoever that Sinema’s supporters had committed any type of voter fraud; regardless, Trump went way beyond asking for a recount—he wanted a “new election.” But McSally, to her credit, rejected Trump’s conspiracy theory nonsense and eventually conceded to Sinema.

4. Pardoning Cronies, However Egregious Their Actions

In Maricopa County, Arizona, Sheriff Joe Arpaio (an outspoken Trump supporter) conducted himself like a dictator or an authoritarian rather than a democratically elected law enforcement official. But the system of checks and balances worked when Arpaio lost a bid for reelection and faced misdemeanor contempt of court charges for refusing to comply with a judge’s orders to cease traffic stops that specifically targeted Latino drivers. Arpaio faced up to half a year in jail, but he was spared incarceration when Trump gave him a presidential pardon in 2017. Chiraag Bains, a senior fellow at Harvard Law School’s Criminal Justice Policy Program, asserted that Trump’s pardon of Arpaio was disturbing not only because it was an “endorsement of racism,” but also, because it “reflects Trump’s deep disdain for the judiciary and its role in our system of checks and balances.”

5. Shameless Monetization of the Presidency

When Trump was campaigning for president in 2016, he promised that there would be a strict separation of his business interests and his political activity. But not unlike a family dynasty in a banana republic—for example, the Somoza family in Nicaragua—the Trump family has monetized the White House. Trump’s daughter, Ivanka Trump, and his son-in-law, Jared Kushner, were appointed as top White House aides. And in July 2017, Mother Jones noted that neither of them had fully divested from their real estate holdings. Not only has President Trump failed to “drain the swamp”—he has made it much more toxic.