Who Represents You - Peacemakers, Warmongers or Fence Sitters? 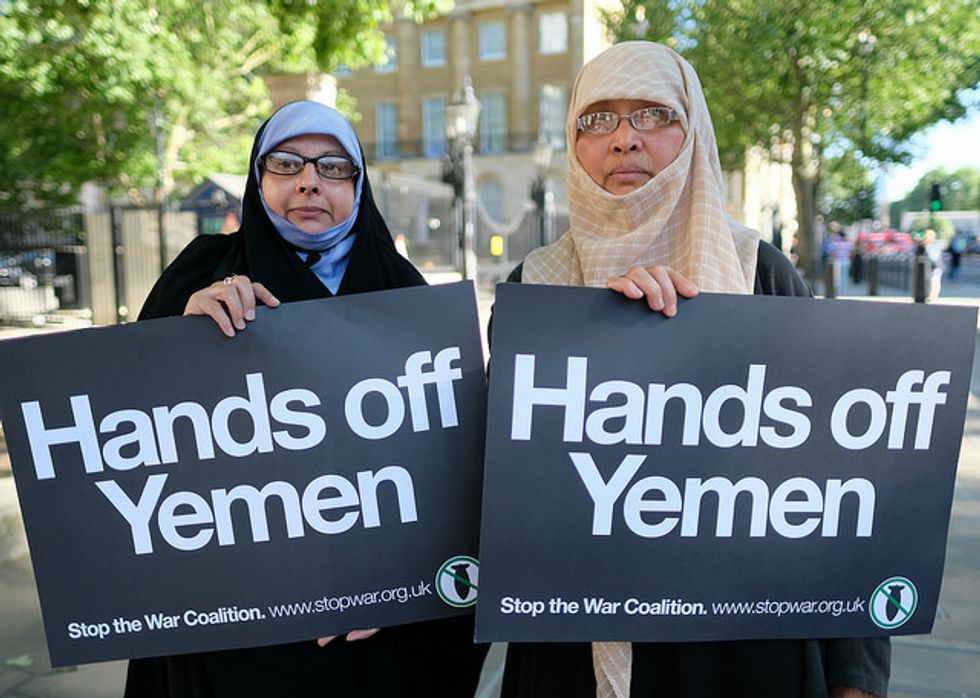 As a foreign policy crisis explodes over the apparent Saudi assassination of journalist Jamal Khashoggi in Istanbul, the failure of the U.S. Congress to assert its constitutional war powers over three years of illegal U.S. military action in the war on Yemen and booming U.S. arms sales to Saudi Arabia and its coalition partners is finally coming home to roost.

The UN already reported two years ago that a child was dying every 10 minutes in Yemen, wracked by the war and its consequences, including malnutrition, diphtheria, cholera and other preventable diseases. Data already showed that more than a third of Saudi-led airstrikes were hitting schools, hospitals, markets, mosques and other civilian sites. But none of the dire warnings by UN agencies and NGOs could trigger the constitutionally required debate and decisive action by the U.S. Congress. Even now, the Trump administration is trying desperately to salvage its blood-soaked arms sales to Saudi Arabia.

Yet as early voting gets under way across the country, congressional campaigns have focused mainly on domestic issues and personality politics, with almost nothing to say about the war in Yemen or other critical questions of war, peace and record military spending. The elephant in the room that none of them want to discuss is that Congress keeps handing more than 60 percent of discretionary federal funds over to a military-industrial complex whose recent wars have only succeeded in plunging half a dozen countries into intractable violence and chaos, leaving vital domestic priorities permanently underfunded.

To fill this dangerous vacuum and help voters make critical decisions at the voting booth, the CODEPINK 2018 Peace Voter’s Guide and Divestment Record has gathered data on arms industry campaign contributions from Open Secrets and the peace voting records of every Member of Congress from Peace Action, and published them all in one place for easy reference.

We invite voters to check out the Peace Voter’s Guide to see where your senators and representatives stand on critical issues of war and peace. How much money have your representatives collected from the arms industry in this election cycle? How have they voted on critical bills and amendments for war, peace, weapons and military spending during their time in Congress?

You can use the Guide to compare your representatives with their colleagues. You can check out the differences between Democrats and Republicans, and see who are the real hawks and doves in each party.

Figures show that arms companies, including their PACS, have contributed about equally to Democrats and Republicans in the Senate in this election cycle, giving an average of over $180,000 to each senator. In the House, however, they have given more to Republicans (an average of $46,000 each) than to Democrats ($31,000 each).

The senators who are most indebted to the arms industry tend to be high-ranking members of committees key to Pentagon funding. In 2017-18, the senator receiving the most weapons industry contributions, $969,550, was Richard Shelby (R-AL). Shelby chairs the powerful Appropriations Committee, the committee that allocates funding for all federal agencies.

There are noteworthy outliers, like Rep. Justin Amash (R-MI-3) with an 82 percent peace voting record and Rep. Pete Aguilar (D-CA-31) at only 18 percent. In the Senate, Republican Rand Paul (KY) has a better voting record (62 percent) than Democrat Joe Donnelly of Indiana (16 percent), although even Rand Paul would be below-average if he were a Democrat.

And then there are real champions for peace and disarmament in Congress: 16 Democrats and 10 Republicans in the House who have run this year’s campaigns with no arms industry cash at all; and progressive leaders who stand up to vote for peace at almost every chance they get, like Barbara Lee (CA-13), with a 99 percent lifetime peace voting record, Katherine Clark (MA-5) at 98 percent, Jared Huffman (CA-2), Mark DeSaulnier (CA-11) and Earl Blumenauer (OR-3) at 96 percent, and Tammy Baldwin of Wisconsin with the highest score in the Senate at 94 percent.

We invite you to explore the CODEPINK 2018 Peace Voter’s Guide and Divestment Record before you vote. We hope it will help you to find incumbents or challengers where you live whose campaigns are not tainted by big contributions from the arms industry, and whom you can count on to reflect your values by casting decisive votes for peace, diplomacy and disarmament in the coming years. Please vote wisely. Millions of lives depend on it.

This article was produced by the Local Peace Economy, a project of the Independent Media Institute.
Report typos and corrections to: feedback@alternet.org.