Is the Way We Count Time a Mechanism of Control? 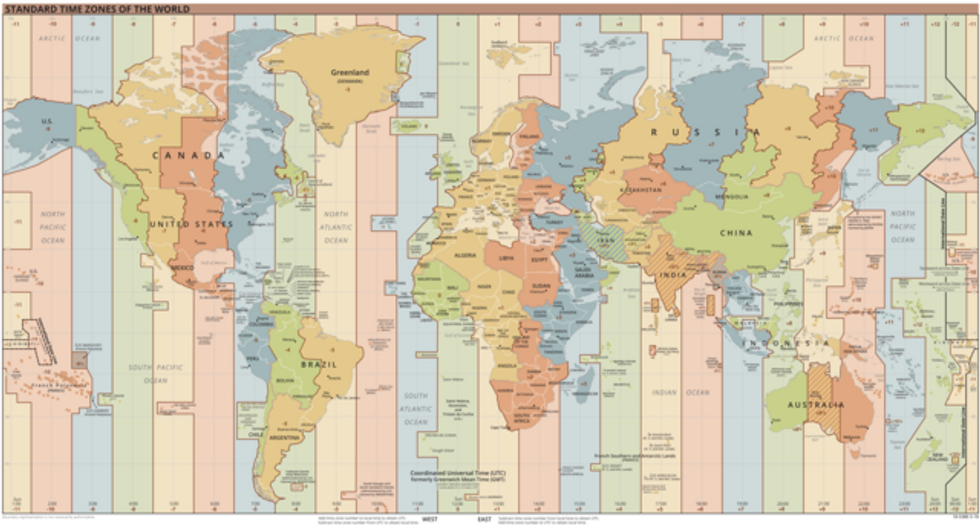 You and I are living in a standardized time, right now. Look at the clock on your device. It’s the same time, depending on your time zone, around the world. Meaning, if it is precisely 1 p.m. in New York, it is exactly 10 a.m. in Los Angeles, and exactly 6 p.m. in Paris. Note: I am not talking about Daylight Savings Time, which has its own issues and a growing movement to repeal it.

What I am talking about is the standardized time we don’t even think about, beating in the background of our lives: The fact that our very concept and perception of time was shaped by the railroad titans of the late 19th century, then solidified by the U.S. government in 1918.

It’s past time to return—at least some times—to the rhythm of the natural world.

According to the docu-series “How We Got to Now,” back in 1868, most towns in the United States had their own time, set locally according to the sun. There were 23 different times in Indiana, for example, and Michigan had 27. People would meet in the morning, or lunchtime, or at sunset, for example.

The alarm clock was the rooster, or the rising sun. Bedtime was dark. A day’s work was, well, a day’s work. Time was, for thousands of years of humanity, set to the rhythm of the natural world.

According to the docu-series, the seeds of the time change came at the beginning of the conquering of the “New World,” with the quest to measure longitude, for which massive sums were offered by royalty and parliaments across Europe. Longitude was necessary to know how far west or east a ship was in the space of the ocean. Latitude could be calculated using the sun, but without accurate longitude, ships could, and did, get lost. For nearly 200 years, inventors and sailors scrambled to calculate it, with the help of Galileo’s concept of the pendulum clock. Time became the critical tool to measure longitude.

And as time marched on, through the mid-1800s, it continued to be held by the wealthy. Those who could afford clocks and use them in their businesses did: The capitalists and railroad and shipping titans—and each ran on their own time. The pocket watch was a status symbol. The poor—the vast majority of people in the United States—were not able to afford such a fancy device. The industrial revolution was plowing ahead, and even for those working in new factories, industries would send people to the homes of workers to make sure they got up for work, because there was no such thing as the alarm clock to wake them.

Then, in 1864, the American Watch Company of Waltham, Massachusetts, created a pocket watch that was affordable for the masses, and marketed them to the soldiers of the Civil War. They sold swiftly, as the common man suddenly had access to a symbol of success.

That explosion of the time-telling devices came at about the same time as another explosion: the railroad and commerce systems of our rapidly industrializing capitalist society. Dozens of railroads were being built quickly, connecting the massive country with tens of thousands of miles of track—and each railroad harmonized to their own time. Every location and system had their own time, making it easy to miss trains and connections. Wisconsin alone had nearly 40 different times. You might leave Boston at noon, and five hours later arrive in New York City. Your watch might say 5 p.m., but in New York it could be 4:30 p.m., New York time, and your connecting train left at 4:45 p.m., Boston railroad time. All those time differences were turning rail commerce and customers into a cluster of frustration, and the railroad bosses knew it.

A man named William F. Allen had a solution: a harmonized time system that divided the country into four “time zones.”* He brought the railroads together in the “General Time Convention” to coordinate the undertaking.

The idea was revolutionary, and on November 18, 1883, standardized time was born, created by the railroads in most of the United States and Canada. A telegraph went out that day at noon in Pittsburgh, and stations and conductors across the country set their time to the hour, based on what time zone they were in. Of course, some protested the change, thinking they were being robbed of time, or that it was unnatural and, therefore, wrong.

As the usefulness of the harmonization sank in, driven by commerce and trade, Americans began setting their new watches to the time of the railroad—standardized time. People and places around the world began adopting the standardized time, with time zones. The world was never the same—yet the U.S. government wouldn’t recognize standardized time officially until 1918, when they also tried, and failed, to implement Daylight Savings Time.

The Standard Time Act of 1918, or Calder Act, as it was called, also gave the power to regulate time zones to the Interstate Commerce Commission.

The time ticking in the back of our lives for the last 100 years was designed and dictated first by the railroads, then by the U.S. government.

How’s that for a capitalist construct?

On November 18, we’ll be 135 years from the moment of the first mass time standardization. We’re already 100 years on from government-mandated time.

Where are we now?

We’re more disconnected than ever from the natural world, it could easily be argued. The hours, minutes, seconds, even milliseconds of our day are structured and measured and primed for data mining or perhaps sold for wages. Your child’s education is dictated by time and often the ringing of the bell, as factories were 100 years ago. And you better not be late for that 10 a.m. Monday morning staff meeting.

Of course, standardized time is important to how we organize our modern world: The idea of flying out of Chicago’s O’Hare Airport, for example, without standardized time sounds like an absolute nightmare. Agreement on time is an incredibly useful tool for organizing our large global population into some sort of harmony.

Despite that relatively fantastic achievement of a global harmony and agreement on time, the man who shaped our entire worldview of time—William F. Allen—is for the most part, forgotten. Yet he thought the implementation of standardized time would be a moment remembered forever: “The adoption of the standard time system is an event which is likely to be noted in the history of the world for all time,” Allen wrote.

What he did was so successful, and became so ubiquitous in the background of our lives, we don’t even remember, or think about, a time when time wasn’t so measured and harmonized by the minute and the hour and the zone.

But that hidden nature, the fact we aren’t even aware of the construct, can be dangerous.

“Not only do watches liberate us, but they also start to enslave us,” Steven Johnson, host and creator of “How We Got to Now,” observes in the docu-series, noting people frantically live by the clock.

Is that time ticking in the background then always necessary? And how do we extricate ourselves from perceived time constructs that are not necessary?

One man I spoke with about this idea said it was impossible—which of course means it is possible.

Another friend thought about it and started holding her events from “midday til sundown.” That sounds like a good place to start. Or perhaps a dinner at sundown, or coffee at dawn. A Thanksgiving dinner “at dusk.” How about waking with the sun, and going to sleep with the night? While not practical for many and perhaps a perceived luxury for others, what would happen if you and your family or community tried it? Or took some other step toward a “time-free” day or space?

If you’re feeling constricted by time, consider how can you extract yourself from it, even for a moment. Think creatively, outside the time box, and share your ideas with others.

*Greenwich Mean Time was started by the railroads in England in 1847, to harmonize the trains of England. That was one zone. What Allen did was much bigger, involved more land, more railroads, more personalities, and more “times”—and the entire world followed his lead.

This article was produced by Local Peace Economy, a project of the Independent Media Institute.
Report typos and corrections to: feedback@alternet.org.