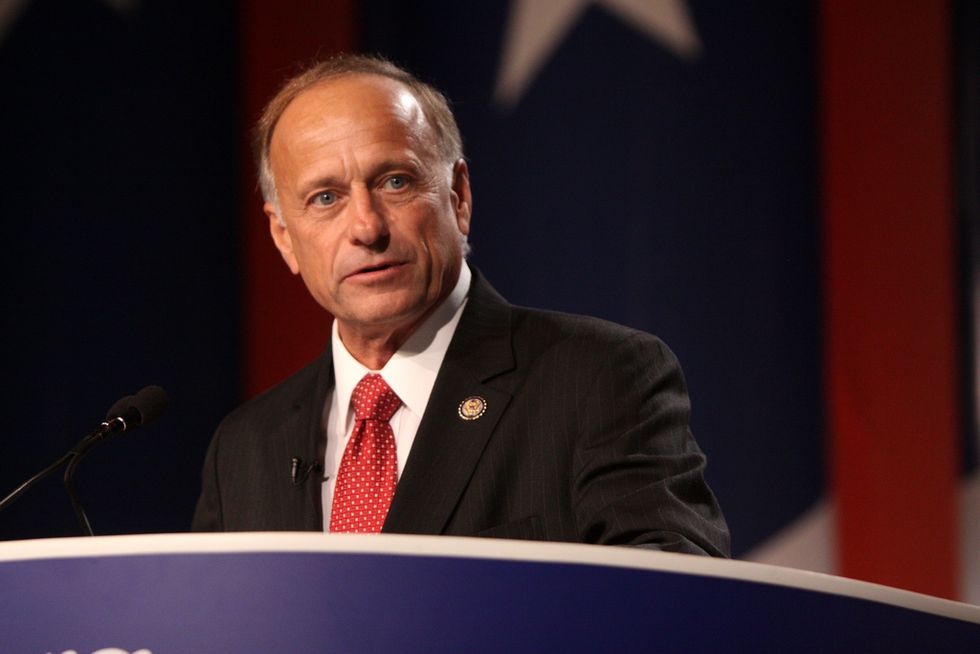 "Congressman Steve King’s recent comments, actions, and retweets are completely inappropriate," tweeted Stivers. "We must stand up against white supremacy and hate in all forms, and I strongly condemn this behavior."

He said that most young Mexican-Americans are drug mules with "calves the size of cantaloupes." He called a Hispanic woman that former First Lady Michelle Obama brought to a State of the Union address a "deportable." He has said that "diversity is not our strength," and that America should be more racially "homogenous" because "we can't restore our civilization with somebody else's babies." He said the Blacks and Hispanics "will be fighting each other" before they overtake whites in population. He recommended people read The Camp of the Saints, a racist 1973 novel in which a feces-eating warlord conquers Europe with a horde of nonwhite invaders. He has routinely shared content from white supremacist politicians around the world, including from a British neo-Nazi, and endorsed a white nationalist candidate for mayor of Toronto.

Perhaps King's vilest moment, however — and likely the one that got Stivers' attention — was the recent incident in which King flew to Europe on a trip paid for by a Holocaust remembrance group, and gave an interview to a far-right Austrian political party founded by a Nazi SS officer. During that interview, King said that low white birthrates threaten the West, and suggested that Holocaust survivor and billionaire philanthropist George Soros is financing the "Great Replacement," a conspiracy theory that holds nonwhite immigration is a systematic plot to depopulate whites in Europe.

In light of these revelations, King is starting to lose his financial backing. Tech giant Intel, dairy producer Land O' Lakes, and pet food company Purina have all suspended contributions to his campaign. And despite the fact that his district voted for President Donald Trump by 27 points, a new poll shows him only 1 point ahead of his Democratic challenger, former professional baseball player J.D. Scholten.

While Stivers' disavowal of King is welcome, it comes years too late to be credible. Despite the fact that King has been endorsing white supremacy for his entire congressional career, the Republican Party has long embraced him with open arms. House Speaker Paul Ryan (R-WI) has allowed him to chair the House Subcommittee on the Constitution and Civil Justice, which among other things is responsible for debating federal civil rights law. Sen Ted Cruz (R-TX) appointed King to co-chair his national campaign for president in 2016. Iowa Gov. Kim Reynolds has also given him a co-chair role on her campaign.

Only now that King's hateful ideology has been noticed, and roundly panned by the public, do Republicans seem to want to take any action to distance themselves from him.