How Turkey, Saudi Arabia and Trump Are Coordinating a Plan to Get Away with Murder 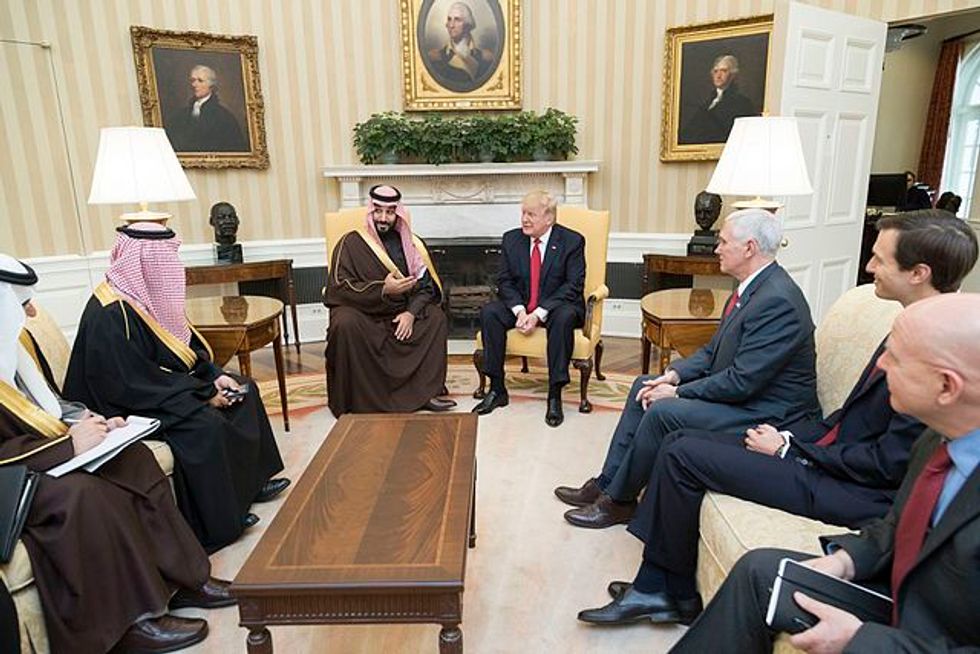 As the mighty monsoon of information (and disinformation) known as the news cycle moves from the apparent assassination of Jamal Khashoggi to the attempted terror bombing of President Trump’s critics, the case of the murdered journalist may soon fade from the front pages and the news shows.

Many people in Washington and Saudi Arabia certainly hope so. Defense contractors are mobilizing to protect those oh-so-generous contracts with the Saudis. The Saudis are deploying their media assets in the Persian Gulf and the United Kingdom.

And now after three weeks of lies, leaks, and conspiracy theories, the autocratic heads of state in Washington, Riyadh, and Istanbul have coordinated their stories. President Trump, Saudi Arabia’s Crown Prince Mohammed bin Salman (MbS), and Turkish president Recep Erdogan are all reading from the same sheet music.

The Saudis have abandoned the lie that Khashoggi left the consulate in Istanbul and discarded the cover story that he died in an accidental fistfight. They have settled on the talking point that his demise was “premeditated murder,” which at least has the virtue of plausibility.

Trump has pushed the idea of investigation onto Congress, which isn’t in session, and rarely challenges a president on foreign policy, much less a key U.S. strategic relationship. Jared Kushner is advising his father-in-law to stick with his friend MbS, using the cold-blooded argument that the relationship between the two countries is more important than the life of one man.

The challenge for the Trump administration: How to help MbS get away with murder?

Hussein Ibish, a pundit at a Saudi-funded think tank in Washington, sees a three-step fix, which is not at all flattering to the kingdom.

1) Erdogan gives a speech in which he pointedly doesn't mention MBS, is very respectful towards King Salman, and do… https://t.co/C93C90pPVh
— Hussein Ibish (@Hussein Ibish) 1540480073

According to the Washington Post, CIA director Gina Haspel heard the tapes, described as “compelling,” and has reported to President Trump.

2) MBS gives a speech which is extremely conciliatory towards Turkey and even Qatar, and specifically gives a rheto… https://t.co/W2ib3t9hRL
— Hussein Ibish (@Hussein Ibish) 1540480121

U.S. commentary on MbS this week focused more on the standing ovation he received Tuesday at a global investment conference than on the nuances of the speech he gave the next day.

“Many are trying to take advantage of this painful incident to divide the two [Turkey and Saudi Arabia],” MbS declared, “but they won’t be able to do so.”

3) the narratives begin to come together, with Saudi authorities acknowledging that the Khashoggi killing was a pre… https://t.co/TVm3JY6SpP
— Hussein Ibish (@Hussein Ibish) 1540480200

(The suggestion that Haspel brokered the deal is intriguing but unproven.)

What is certain is the emerging cover story comes complete with a designated patsy to take the fall for MbS. It serves to create the appearance of justice while leaving MbS in charge of investigating himself. That may look cynical and ridiculous to the world, but it accommodates the interests of all three parties, at least for the time being.

What does MbS get? He’s hoping to maintain unconditional U.S. support for his agenda of cracking down on rivals at home while confronting Iran everywhere in the Middle East.

The problem, says Bruce Riedel, a former Saudi analyst for the CIA, is the war in Yemen. Launched by MbS in 2015, the war was supposed to deliver a quick victory over the Houthi, a Shiite sect in Yemen, supposedly in league with Iran.

Three-plus years later, Yemen is a proverbial “quagmire,” a trusty metaphor in the lexicon of Washington euphemisms. Yemen is better described as a free-fire zone of war crimes, a man-made humanitarian catastrophe worse than Syria, and one in which the U.S. government is even more complicit.

The United States did not join the Saudi-led coalition that is fighting in Yemen, but it has always supported the Saudi war logistically. Last month, Secretary of State Mike Pompeo certified the Saudis are “taking steps” to reduce civilian casualties.

Pompeo ignored compelling evidence that the Saudis are deliberately targeting farmers, fishermen, food transportation facilities, and the water supply. Fourteen million people are at risk of starvation, according to the United Nations. In response to questions about the U.S. role in the Yemen war, Lt. Col Earl Brown, U.S. Central Command spokesman, only talked about the counterterrorism mission and said nothing about Yemen.

I asked Riedel if the Defense Department was aware that the Saudis are targeting Yemen’s food system so as to starve the Houthi into submission.

“They say they don’t know,” he replied. “They won’t provide any witnesses to Congress who can answer questions about the war. It’s a cover-up.”

If the Khashoggi cover-up is successful and the Yemen war continues, Riedel notes, the Houthi forces will continue to fire missiles at the Saudi capital. The most likely source of these missiles is Iran. The Trump administration is spoiling for a fight with Iran, and it might just get one.

“Sooner or later, one of these missiles is going to hit a building and kill a lot of people,” Riedel said. “What are the Saudis going to do? What is the Trump administration? They are going to have to back up their words, and that could have a very dangerous situation.”

The emerging Khashoggi cover-up is hazardous to the health of the United States in more ways than one.