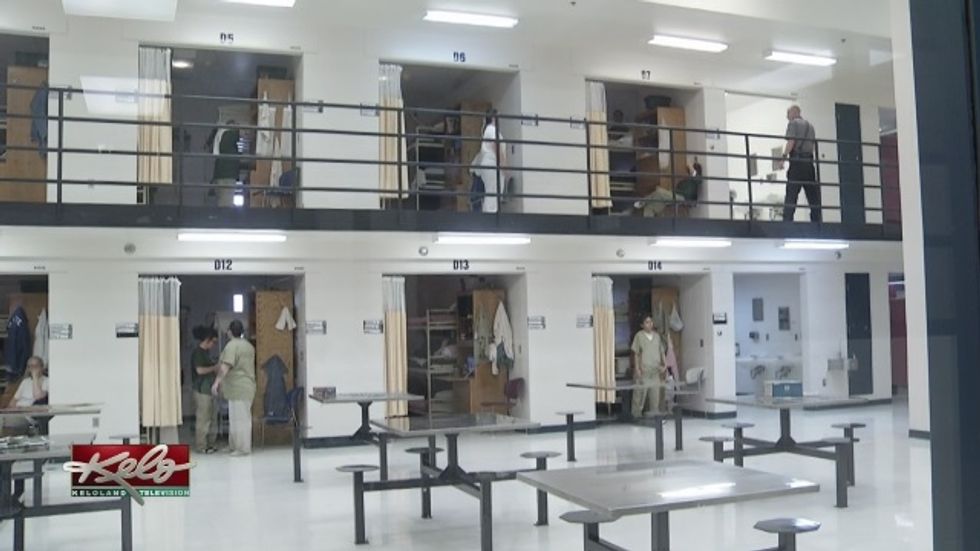 Like other Great Plains states, South Dakota has a methamphetamine problem. But it's becoming increasingly evident that South Dakota also has a problem with the way it deals with meth.

Because of its strict drug laws, the state is seeing a dramatic spike in women being sent to prison for meth. According to a new report from the non-profit news organization South Dakota News Watch, the number of women in prison in the state has jumped 35 percent since 2013, while the male prison population has increased at only one-quarter of that rate. Nearly two-thirds of all women prisoners in the state are there for non-violent drug offenses. The state now has the fourth-highest incarceration rate for women in the country, trailing only Oklahoma, Wyoming, and Kentucky.

Overall, about one-third of all inmates in the state are doing time for drug-related offenses, the majority of them for simple drug possession. That's a higher percentage than most other states, where drug offenders tend to make up somewhere around 20 to 25 percent of the inmate population.

The high drug-related incarceration overall and for women in particular stems less from the prevalence of drug use than from the conservative, largely rural state's reaction to it. South Dakota has not responded to decades of failed war on drug policies by reforming them, but by doubling down on them.

The state has not moved toward the defelonization of drug possession, as at least 16 other states have. Instead, it has moved in the opposite direction. South Dakota has mandatory sentencing laws that include prison not only for the manufacture and distribution of meth but also for simple possession.

State lawmakers and cops have long favored tough drug laws, and they are still at it. This year, state Attorney General Marty Jackley (R) guided bills through the legislature that heighten penalties for meth dealing and increase sentences for dealers whose clients overdose and die.

But the state's most notorious and contentious drug law—one that is sending hundreds of people to prison—is the state's "possession by ingestion" statute. Otherwise known as an "internal possession" law, the statute allows for a felony conviction if a drug test reveals the presence of illicit drugs in a suspect's system. (The law also applies to marijuana, but the penalty for testing positive for pot is only a misdemeanor.)

The strictest in the nation, that law was upheld by the state Supreme Court in 2004. Last year, a bipartisan group of lawmakers filed a measure that would have slightly tweaked the law by removing marijuana, but that bill was killed by a unanimous vote in the first committee that heard it.

South Dakota law enforcement and lawmakers may be happy with the status quo, but the man who actually runs the prison system isn't. State Corrections Secretary Denny Kaemingk told South Dakota News Watch that the cops' and courts' proclivity for busting and imprisoning women on drug charges is creating an expensive and ineffective cycle of imprisonment, release, and recidivism.

"We seem to think that locking individuals up is going to solve their addiction problem," said Kaemingk, a former drug officer. "They’re coming to us in corrections and we’re thinking that solves the problem, and I think in many cases it makes the problem worse."

Criminalizing addiction, especially among women who are mothers, Kraemingk said, creates a situation where the children are more likely to end up in prison themselves. He pointed to national studies showing that up to 80 percent of children who have parents behind bars will end up there themselves.

"Imprisonment in South Dakota is generational," Kaemingk said. "The females behind prison walls have experienced that as a child. The generation we have back there now as inmates experienced the same things when they were children."

Ironically, the state is sending these women to prison for long enough to disrupt their lives and child-rearing situations, but not long enough to actually take advantage of drug treatment programs already in place in the state prison system. A meth-centered treatment program in use in the men's prisons takes 15 months to complete, but the women going to prison for meth possession—internal or otherwise—average sentences of only eight months.

Kraemingk and other relatively enlightened actors in the state are pushing for enhanced treatment opportunities and expanding drug courts, among other measures, to better deal with the situation, but nobody seems to be talking about not involving these women in the criminal justice system in the first place. A first step would be getting rid of that hideous "possession by ingestion" statute. The next step would be defelonization or outright decriminalization of drug possession in the state. Drug use absent harm to others should not be the state's business.