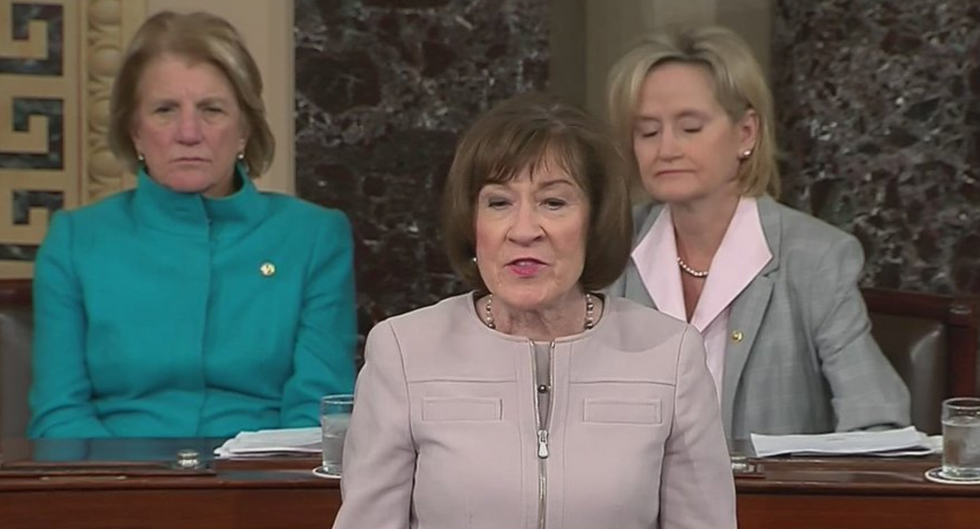 When Sen. Susan Collins announced, on Friday, October 5, that she would be voting “yes” on Brett M. Kavanaugh’s confirmation to the U.S. Supreme Court, the four-term senator from Maine went out of her way to convince Kavanaugh’s detractors that he wasn’t nearly the far-right extremist they thought he was. Kavanaugh, Collins insisted, “fits within the mainstream of legal thought” and is “more of a centrist than his critics maintain”; further, he has a “record of judicial independence” and will protect abortion rights as well as access to health insurance if one has a preexisting condition—which, of course, would be just about anyone over the age of 40. But Kavanaugh’s critics weren’t buying it.

Over the weekend, a Crowdpac page raised more than $1 million for a hypothetical opponent should Collins seek reelection in 2020. Even before Collins had announced her “yes” vote for Kavanaugh, the page had raised $2 million—declaring, “Either Collins VOTES NO on Kavanaugh, or we fund her future opponent.” After Collins’ “yes” announcement on Friday afternoon, October 5, the page was so overwhelmed with traffic that it crashed. By 11 p.m. that Friday evening, however, over $2.4 million had been raised—and by Monday morning, October 8, that figure had increased to more than $3.5 million. Kavanaugh’s opponents are furious with Collins, realizing that President Donald Trump’s nominee is hardly the moderate she claims.

Here are five things that Collins got horribly wrong when came out in support of Kavanaugh’s confirmation.

Collins, one of the few pro-choice Republicans in the Senate, has asserted that Kavanaugh considers Roe v. Wade “settled law” and would not vote to overturn that 1973 decision. But the Christian Right didn’t push for Kavanaugh’s confirmation so aggressively because they think he shares the more libertarian views that retired Justice Anthony Kennedy had on abortion rights; Kavanaugh was nominated because he is an “originalist” or “strict constructionist” and a hardcore social conservative. Kavanaugh is big on states’ rights, and the Christian Right considers abortion not only a religious issue, but also, a states’ rights issue. According to a new report from Planned Parenthood, 25 million U.S. women of reproductive age “are poised to lose access to abortion immediately if Kavanaugh is the fifth vote to overturn Roe vs. Wade.”

2. Kavanaugh Will Not ‘Lessen the Divisions’ in the U.S.

During her October 5 speech, Collins claimed that Kavanaugh “will work to lessen the divisions” in the U.S. But during his angry, bitter diatribe before the Senate Judiciary Committee on September 27, Trump’s nominee hardly sounded nonpartisan. Taking direct aim at Democrats, Kavanaugh asserted that the sexual abuse allegations of Dr. Christine Blasey Ford were an act of revenge on behalf of Bill and Hillary Clinton. Kavanaugh showed himself to be a severe partisan, and Collins, in effect, endorsed that partisanship when she voted to put him on the Supreme Court.

3. Kavanaugh Will Not Protect Americans with Preexisting Conditions

One of the most popular parts of the Affordable Care Act of 2010, a.k.a. Obamacare, is the fact that it prohibits insurance companies from denying health coverage to Americans with preexisting conditions—which could be anything from cancer to diabetes to asthma to anemia. Collins claims that Kavanaugh will uphold that protection if the Supreme Court examines the ACA again, but Kavanaugh’s rulings have demonstrated that he is no fan of the ACA. In the federal lawsuit, Texas v. Ajar, Republicans from 20 different states are arguing that the ACA is unconstitutional and must be abolished in its entirety—and if that case ever reaches the U.S. Supreme Court, Justice Kavanaugh could help deprive well over 20 million Americans of health insurance.

4. Kavanaugh Is Hardly a Voice of ‘Independence’

Collins’ claim that Kavanaugh has a “record of judicial independence” is laughable. During his 30 years on the Supreme Court, Justice Anthony Kennedy was a wild card who sometimes frustrated liberals and progressives with his pro-corporate rulings (most notably, Citizens United v. the Federal Election Commission) yet often voted with Justice Ruth Bader Ginsburg when it came to abortion and gay rights—and the Christian Right detested him for having that libertarian streak. Trump, by picking Kavanaugh, was not looking for the next Anthony Kennedy or the next Sandra Day O’Connor; he specifically wanted a far-right ideologue who would support the Christian Right as enthusiastically as he supports giant corporations. And he has that in Justice Kavanaugh, who is as much of a corporatist as he is a theocrat.

5. Kavanaugh Is No Centrist

Collins’ assertion that Kavanaugh is “more of a centrist than his critics maintain” is laughable in light of the strong support he has enjoyed from far-right theocrats like the Rev. Franklin Graham, the Rev. Jerry Falwell, Jr.  and the Family Research Council’s Tony Perkins. For many years, the Christian Right complained bitterly because Kennedy and Justice Sandra Day O’Connor (President Ronald Reagan’s first Supreme Court nominee) weren’t as far to the right as Justice Clarence Thomas or the late Justice Antonin Scalia. Being conservative wasn’t enough—they had to be far-right. And with Kavanaugh’s confirmation, the High Court isn’t even centrist at this point—let alone liberal or progressive.