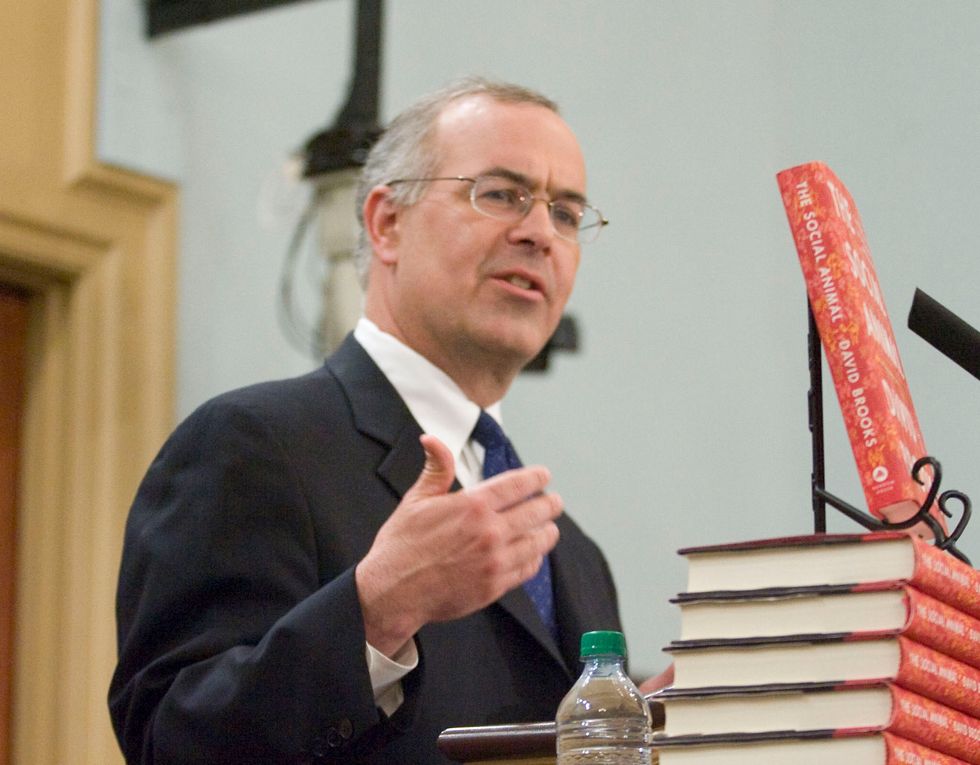 New York Times columnist David Brooks is no fan of President Donald Trump, but to maintain his own credentials as a certified centrist pundit, he cannot bear to praise the Democratic Party either.

In his latest column, the cynical side of his centrist shtick was exposed in the most blatant way. Titled "The Materialist Party," he lambasted the Democrats for campaigning for the 2018 midterms on ... concrete proposals to improve American health care.

"In normal times, there’s good reason to run on this issue," he wrote. "Millions of families are plagued by inadequate insurance coverage. If you’re trying to win a swing voter in Arizona, it’s a bread-and-butter issue that has appeal."

So what's the problem with this approach now?

"It offers no counternarrative to Trump, little moral case against his behavior, no unifying argument against ethnic nationalism. In politics you can’t beat something with nothing. Democrats missed the Trumpian upsurge because while society was dividing into cultural tribes, they spent 2008 through 2016 focusing on health care. Now that the upsurge has happened, they are still pinioned to health care," he explained.

There actually is a clear counternarrative to Trump. Unlike most Republicans, Trump ran in 2016 on a promise to bring health care to all Americans. But just like every other Republican, it became clear in office that he has no interest in actually promoting universal coverage, despite the policy's evident popularity.

By defending Obamacare protections for people with pre-existing conditions, Democrats show that they're actually the party more in tune with the people's concerns. In fact, this is so obviously correct that Republicans have decided to simply lie about their own positions, claiming to support these protections while working to destroy them.

Brooks also bizarrely claimed Democrats "missed the Trumpian upsurge," which seems to refer to the 2016 election — in which Trump lost the popular vote, and after which he's been a historically unpopular president.

Later in the piece, Brooks gives the game away on his bogus criticism of the Democrats.

"[We've] learned that when Democrats do raise a moral argument, it tends to be of the social justice warrior variety," he wrote. "The core argument in this mode is that the oppressive structures of society marginalize women, minorities and members of the L.G.B.T.Q. communities."

So in essence, he's asking Democrats to run on a moral vision for the country against Trump's perverse enthnonationalist misogyny, but they should avoid making arguments about the treatment people of color and women. On the one hand, he wants Democrats to oppose Trump's ideology; on the other hand, anything they do to actually oppose it will be denounced as "identity politics" or "political correctness."

Before the campaign really got started, many moderate commentators like Brooks were warning that Democrats should avoid simply being "anti-Trump." To oppose him, they argued, Democrats must have a concrete agenda. Democrats seem to have agreed, and much of their campaign has been based on health care.

But to be a centrist like Brooks, you can never be happy with a political party. If Brooks was happy with the Democrats, he'd become a Democrat, and he'd have to abandon the cherished "centrist" label.

No one should doubt for a second, though, that had Democrats run a campaign based on largely on opposing Trump and protecting the country from his bigotry and moral decline, Brooks and others would now be criticizing them for abandoning concrete policy issues and descending into the morass of "identity politics."

It turns out that if your basic logic is that distinct identity groups are under threat from an oppressive society, it’s very hard to then turn around and defend that society from authoritarian attack, or to articulate any notion of what even unites that society. You can appeal to women as women and to ethnic groups as ethnic groups, but it’s very hard to make a universal appeal to Americans as Americans, or defend the basic American norms that Trump calls into question. It’s a messaging vulnerability that Democrats have imposed upon themselves.

Left completely unsaid, however, is what exactly the alternative message Brooks thinks Democrats should run on. Those closest he gets is suggesting they should make a "universal appeal to Americans as Americans" — a completely meaningless and vacuous phrase that would do nothing to inspire voters.

What is true is that while the Republican base is relatively homogenous, the Democratic coalition is much more diverse. This is the basic fact of American politics, which Brooks surely knows, and it is the reason why the same kinds of authoritarian, cultural appeals that Trump makes by drumming up fears of outsiders don't work among Democrats — and thank goodness for that. This is not some "messaging vulnerability that Democrats have imposed upon themselves."

It's the nature of the party and one to be welcomed. But it also means that the party's "cultural" appeals can't be mass market — they have to be targeted and voluminous, picking out the different identities of the various groups that make up the coalition. When Democrats engage in this kind of rhetoric, it gets denounced as "social justice warrior" talk by people like Brooks.

The real benefit of a coalition party is that it focuses politics on the actual steps governments can take improve lives — which is what politics is supposed to be about.

At one point, Brooks even acknowledged that Democrats will likely win the House "because Trump is so effective at driving away voters." This concession undermines his entire argument. If Trump were so skilled at using cultural arguments to rile up voters, and cultural arguments were the most important part of American politics, as he claims, then Trump wouldn't be driving away voters — he'd have the election in the bag.

Democrats are, indeed, likely to lose ground in the Senate, as Brooks said — but that is largely due to its distorted geography and the particular seats that are up for re-election this year, not a glaring failure of the party.

In trying to maintain his centrist bona fides, Brooks ties himself in knots and refutes his own arguments. His need to bash the Democrats is so strong that he abandons rigorous argument in favor of perfectly positioned denunciations of the failings of both parties, no matter what. The country may fall apart — but his reputation as a moderate will remain intact.