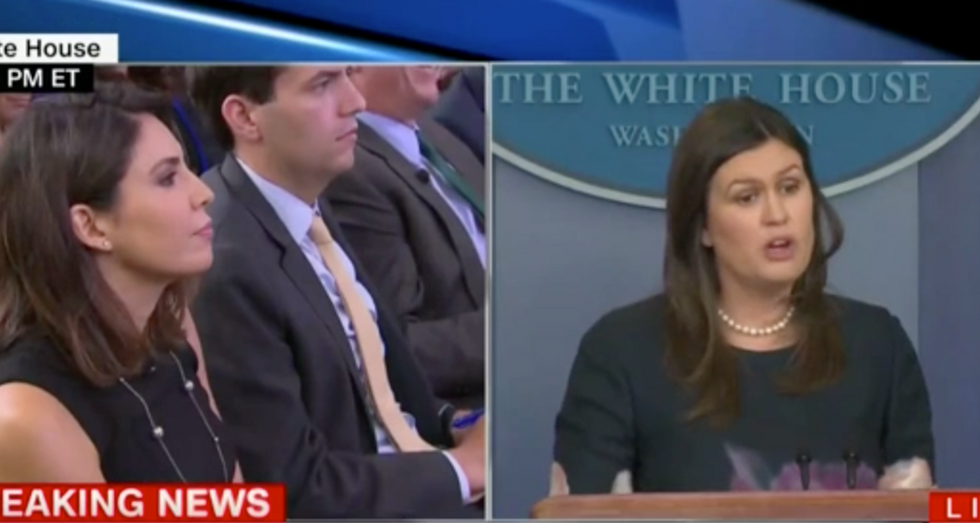 Sarah Huckabee Sanders sat down with the "Today" show's Savannah Guthrie Thursday morning, just hours before one of the most consequential Senate hearings in modern history is about to begin. And she delivered astonishing lies.

According to the White House press secretary, Friday's Judiciary Committee vote, scheduled by Republican Chairman Chuck Grassley and vehemently opposed by all 10 Democrats on the Committee, is the fault of Democrats, as is not fully investigating the allegations from all the accusers.

"Why not have further investigations?" Guthrie asked Huckabee Sanders. "As you know, Senator Grassley's already got the vote scheduled for tomorrow. Why not a fuller, more comprehensive investigation?"

"Well I think that's one of the frustrations I think all Americans have," Sanders replied. "But that's at the hands of the Democrats – they held on to this, they should have brought this forward."

There is no reason a vote must be held Friday. The Republicans held open Antonin Scalia's seat for more than 400 days. They announced if Hillary Clinton won they would refuse to place any of her nominees on the Supreme Court as long as she was president.

And Democrats on the Committee – and Democratic voters across the country – have been demanding and begging the FBI investigate, and interview all of Kavanaugh's accusers and all of the named witnesses and others who have knowledge of his actions, especially Mark Judge. Republicans on the Committee and President Trump have steadfastly refused.

Huckabee Sanders told Guthrie that having the vote less than 24 hours after today's hearing is, as Guthrie said, "not try to rush it through."

And then, another big lie.

Huckabee Sanders said the accusers "were more than willing to give interviews to The Washington Post and The New Yorker, but refused to sit down with the Senate Judiciary Committee."

Every named accuser has offered to testify, under oath, before the Senate Judiciary Committee today. They were refused or ignored.

Deborah Ramirez, the second named accuser, as of Wednesday night, hasn't even been able to get a response from the Republicans on the Committee, according to Ronan Farrow:

Ramirez’s lawyers made their letters to the FBI and Senate public. “She...repeatedly has asked the Committee to speak with her about a process by which she can be heard by Committee members. But the majority staff thus far has refused even to speak with Ms. Ramirez’s counsel”: pic.twitter.com/72mHfy4iI0

And Michael Avenatti, who represents Julie Swetnick, the third named accuser, confirms Republicans refuse to talk to her:

My client Julie Swetnick is demanding an immediate FBI investigation and the opportunity to testify under oath before the Committee. Why is Brett Kavanaugh and @ChuckGrassley refusing to allow this? Why are they trying to muzzle women and prevent the truth from being known?