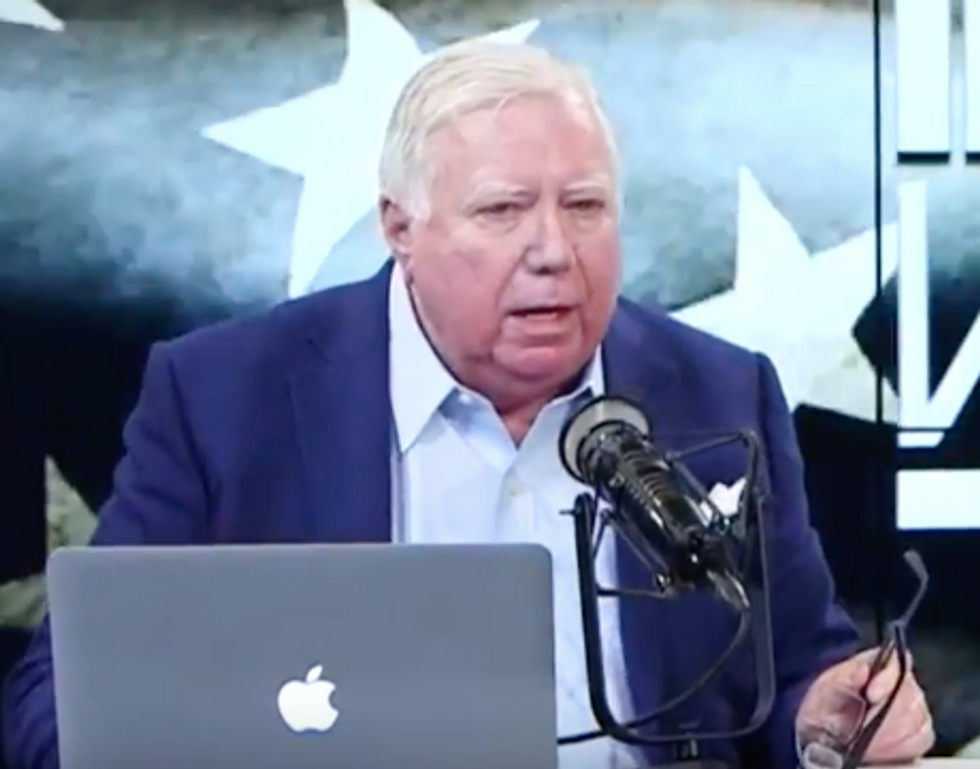 Prior to the 2000s, far-right conspiracy theorist and author Jerome Corsi was little known in the publishing world and earned his living in the financial services sector. But in recent years, Corsi (who turned 72 on August 31) has become a prominent figure on the alt-right—and in 2017, he left his position as a staff writer for World Net Daily to become the Washington bureau chief for Alex Jones’ Infowars. World Net Daily is so far to the right that even right-wing journalists for the National Review and the Weekly Standard shy away from it, but it was a good place for Corsi to build his brand and promote way-out conspiracy theories. And at Infowars, conspiracy theories—however outrageous or over the top—are always welcome.

1. Corsi Was a Leading Pizzagate Proponent in 2016

After becoming an ardent supporter of Trump’s presidential campaign in 2015, Corsi went on to become a leading proponent of Pizzagate—the goofy conspiracy theory that John Podesta, Hillary Clinton’s presidential campaign manager, operated a child sex ring underneath Comet Ping Pong, a pizzeria in Washington, DC. The theory went viral in 2016 after Podesta’s e-mail account was hacked and WikiLeaks made his e-mails public; according to the Pizzagate theory, those e-mails contained coded messages proving that Clinton and other high-ranking Democrats were involved in the ring. Of course, the theory has been totally debunked by Washington, DC’s police department, but that didn’t prevent Corsi from promoting it. And Pizzagate became absolute hell for James Alefantis, Comet Ping Pong’s owner, when an alt-right gunman named Edgar Welch stormed the restaurant with an assault rifle (Welch pled guilty to weapons and assault charges).

2. Corsi Was a War Hawk During the Bush Era

Back in the George W. Bush years—before Corsi allied himself with Alex Jones—Corsi was more of a neocon, pounding the war drums with his 2005 book, “Atomic Iran: How the Terrorist Regime Bought the Bomb,” and painting 2004 Democratic presidential nominee John Kerry as a traitor in “Unfit for Command: Swift Boat Veterans Speak Out Against John Kerry” (which Corsi wrote with John O’Neill). Yet Corsi was critical of Bush, accusing him of being a “globalist,” favoring open borders and trying to merge the U.S., Canada and Mexico into a unified North American state—and in 2008, Corsi called for Bush’s impeachment.

When wingnuts decide that the Republican Party and Libertarian Party aren’t right-wing enough, one of their options is the far-right Constitution Party—which Corsi is a member of. According to Corsi, the Constitution Party’s Howard Phillips (who died in 2013 and was a founding member of the party) urged him to run for president in the 2008 election. And Corsi agreed to be nominated at the Constitution Party National Convention but dropped out in July 2007 and endorsed anti-gay theocrat Chuck Baldwin as the nominee.

During the 2008 GOP presidential primary debates, Sen. John McCain famously declared that he would follow Osama bin Laden to the depths of hell in order to capture the al-Qaeda leader himself and make him pay for the 9/11 terror attacks. But in 2008, Corsi questioned McCain’s anti-jihadist credentials by claiming that a Kosovo group tied to al-Qaeda was supporting his presidential campaign. Corsi claimed, “Presumptive Republican presidential nominee John McCain has enjoyed strong support from a lobbyist group that backs the Kosovo Liberation Army despite allegations the KLA is a Muslim terrorist group with ties to criminal drug networks and al-Qaida.”

5. Corsi Was a Leading Birther During Obama’s Presidency

Corsi devoted two different books to anti-Barack Obama conspiracy theories: first “The Obama Nation: Leftist Politics and the Cult of Personality” in 2008, then “Where’s the Birth Certificate?: The Case That Barack Obama Is Not Eligible to Be President” in 2011. While “The Obama Nation” claimed that Obama was a closest Islamist who wanted to undermine the U.S. military, “Where’s the Birth Certificate?” established Corsi as one of the leading voices of the racist birther movement—which insisted that Obama wasn’t really a U.S. citizen and therefore, wasn’t qualified to be president.

Obama’s citizenship has been well-documented, and his official, government-issued birth certificate clearly states that he was born in Honolulu, Hawaii on August 4, 1961. Bearing that in mind, Esquire ran a satirical article in 2011 shortly after the release of “Where’s the Birth Certificate?” saying that the book had been recalled. It was a joke, but Corsi wasn’t laughing—and Corsi filed a frivolous lawsuit against Esquire, seeking damages of $285 million. But in 2012, Corsi’s lawsuit was thrown out in federal court on the grounds that satire is protected by the First Amendment.