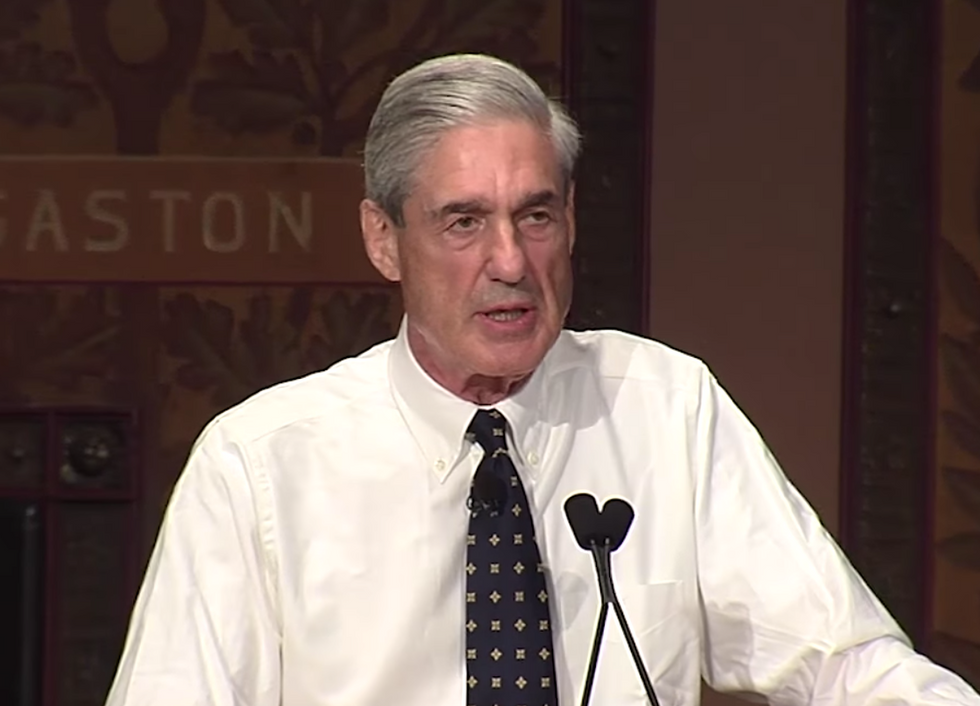 Special Counsel Robert S. Mueller, who has been overseeing an extensive investigation into Russian interference in the 2016 presidential election and related scandals, has been in the news a lot this week—especially with two of President Trump’s closest associates (his former personal attorney, Michael Cohen, and his former campaign manager, Paul Manafort) having pled guilty to or been found guilty of serious federal crimes. Cohen’s included campaign finance violations and tax evasion, while Manafort’s included tax evasion and bank fraud.

In the far-right media—from Fox News to Breitbart.com to AM talk radio—Mueller is often painted as a partisan Democratic Party activist with a vendetta against Trump and the Republican Party in general. Fox New’ buffoonish Jesse Watters event went so far as to say that Mueller is “basically the Democrat candidate for president.” But there is a big problem with that characterization: Mueller is a conservative Republican who was appointed director of the FBI by President George W. Bush. And he has a long history of working closely with both Republicans and Democrats.

Appointed director of the FBI by President George W. Bush during the Summer of 2001, Mueller stayed with the organization during most of Bush’s presidency and throughout Barack Obama’s first term as president. Mueller left in 2013, the year Obama started his second term—which makes him the second longest-serving FBI director in the agency’s history. The longest serving was the notorious J. Edgar Hoover, who served from 1924 until his death at the age of 77 in 1972 and worked with eight different presidents.

During the George W. Bush years, attorney Thomas B. Wilner was demonized by neocons for criticizing the conditions under which Guantanamo Bay detainees were held. The prisoners, Wilner asserted in a Washington Post commentary, deserved a “fair hearing” and a “chance to learn the charges against them and to rebut the accusations before a neutral decision maker.” As neocons saw it, Wilner was soft on terrorists. But Mueller didn’t agree; in his view, Wilner was doing his job well by pushing for due process and embracing the innocent-until-proven-guilty principle. And at a dinner, Mueller stood up, raised his glass and declared, “I want to toast Tom Wilner. He’s doing what an American should.”

On foreign policy, Dick Cheney was one of the most darkly influential vice presidents in history, encouraging so-called “advanced interrogation methods”—in other words, torture techniques in violation of the rules of the Geneva Convention. And there were times when Mueller and Cheney butted heads. President Bush urged Mueller to round up more terrorism suspects in the U.S., but Mueller responded that it would be difficult to “identify and isolate” people who hadn’t actually committed a crime. Cheney didn’t like Mueller’s response, complaining, “That’s just not good enough. We’re hearing this too much from the FBI.”

4. Mueller Threatened to Leave the FBI on 2 Separate Occasions

During the Bush years, Mueller threatened to leave the FBI in both 2004 and 2006. When John Ashcroft (Bush’s first attorney general) was in the hospital in 2004, Bush authorized warrantless wiretapping of domestic communications despite objections from the U.S. Justice Department—and Mueller, along with Deputy Attorney General James Comey, threatened to resign unless those issues were dealt with. Then, in 2006—when Louisiana Rep. William Jefferson was involved in a corruption scandal and the FBI seized his records—Mueller objected to Bush’s order that the FBI return those records. After Mueller threatened to resign a second time, Bush reconsidered. And Mueller stayed on another seven years.

5. Mueller Was Interviewed by President Trump to Head the FBI Again, But He Wasn’t Hired

On May 16, 2017—about four months into Trump’s presidency—Mueller was interviewed by Trump about serving as director of the FBI again and replacing James Comey (who, under President Obama, had replaced Mueller as head of the FBI in 2013 but was fired by Trump on May 9, 2017). Mueller wasn’t hired, but on May 17, 2017, Deputy Attorney General Rod Rosenstein appointed him to serve as special counsel for the U.S. Justice Department and head its Russia-related investigation.