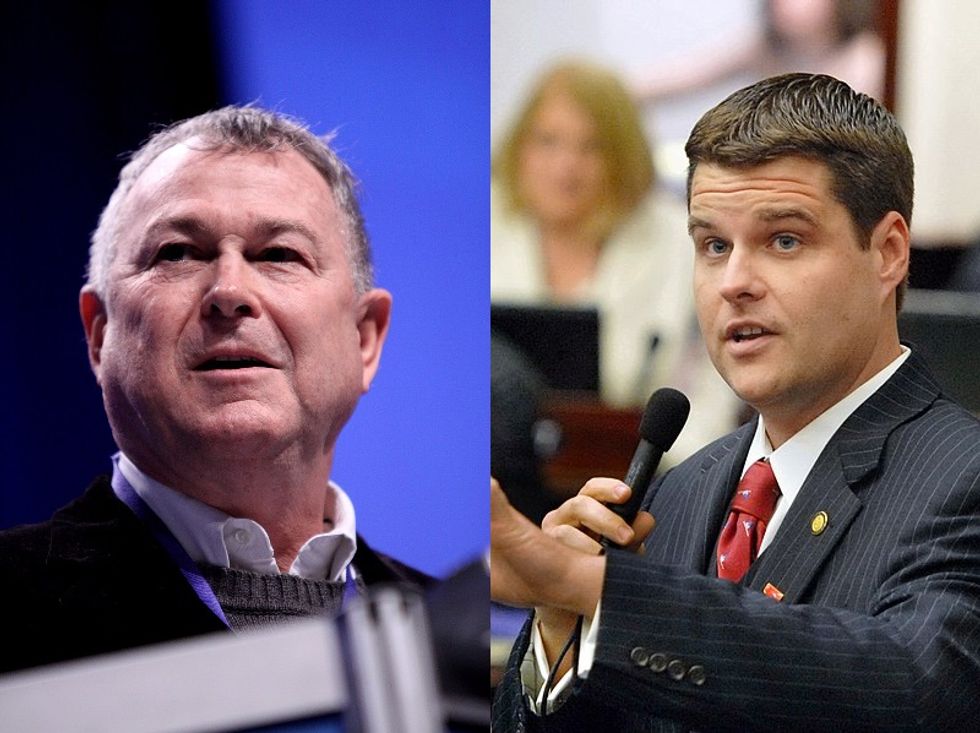 Reps. Dana Rohrabacher (R-CA) and Matt Gaetz (R-FL) previously drew scrutiny for hanging out with Chuck C. Johnson, a far-right Internet troll and Holocaust denier, and both have tried to explain away the occurence.

But according to Mother Jones, both congressmen somehow ended up fraternizing with him a second time this summer. Specifically, Johnson was on board a yacht fundraiser in Newport Beach, California, on behalf of Gaetz's re-election campaign, at which Rohrabacher gave a speech in support of his colleague. The fundraiser was hosted by public relations executives Alfred Balitzer and Rod Wilson, the former of whom Johnson has referred to as a "mentor."

In January, Gaetz, one of President Donald Trump's closest kindred spirits in Congress, faced controversy and a letter of condemnation from the Anti-Defamation League for providing Johnson a ticket to attend Trump's State of the Union Address as his guest. Gaetz argued that Johnson had simply "showed up at my office" and the invite was not an endorsement of his views, but bizarrely, added in an interview on Fox Business that Johnson is "not a Holocaust denier, he’s not a white supremacist."

Rohrabacher, another Trump ally and Congress' most notorious apologist for Russian President Vladimir Putin, allowed Johnson to sit in on a meeting between himself and Sen. Rand Paul, after Johnson had helped him secure a meeting with WikiLeaks founder Julian Assange in August and donated $5,400 in Bitcoin to his campaign. Rohrabacher maintains that Johnson was not invited to the meeting with Paul, but admits that he was not asked to leave it either.

Johnson, a former Breitbart reporter who has spent years promoting fake news through his GotNews web site, and who was banned for life from Twitter for inviting people to raise money to help him "take out" Black Lives Matter activist DeRay McKesson, came out as a Holocaust denier in early 2017.

"I do not and never have believed the six million figure," he told a commenter on an alt-right Reddit thread. "I think the Red Cross numbers of 250,000 dead in the camps from typhus are more realistic. I think the Allied bombing of Germany was a ware [sic] crime. I agree … about Auschwitz and the gas chambers not being real."

He has since tried to claim that he does not actually deny the Holocaust, and only said this to see what a reaction it would get.