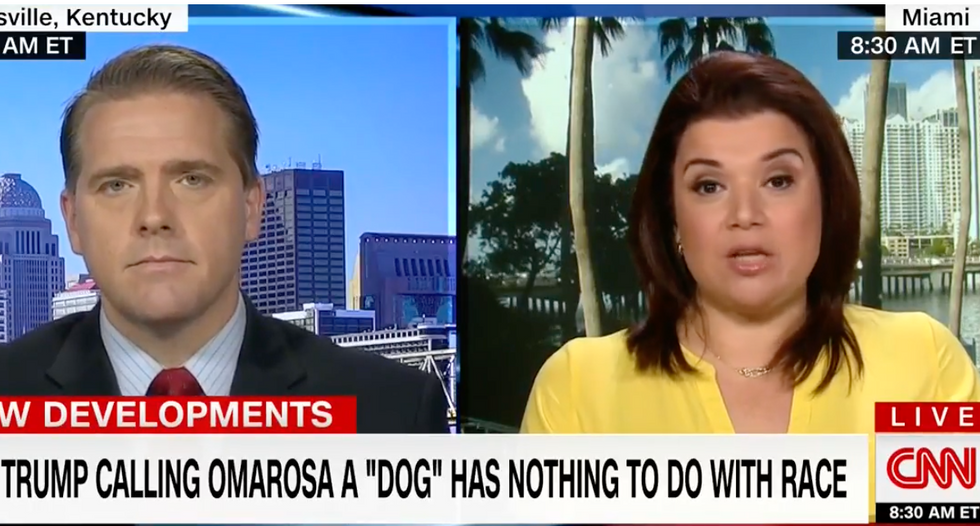 CNN political commentator Ana Navarro on Wednesday shot down Donald Trump defender Scott Jennings who claimed the president’s attack on Omarosa Manigault-Newman was not racist because he “basically insults anyone who moves.”

The pair were discussing Sarah Huckabee Sanders’ performance Tuesday during which she claimed Trump was not racist when tweeting that Manigault-Newman, his former aide, is a “dog.”

“The problem is that Donald Trump gets away with behaving in an unpresidential, unseemly manner over and over and over again when it comes to the Republican base,” she said, adding there’s “no bottom to this barrel.”

Jennings, citing Sanders, claimed Trump “basically insults anyone who moves if that person that is moving is moving against him.”

“I wish the president would spend more time telling the good story he has to tell about the optimism in the country and the good economy,” he added.

That’s when Navarro explained Trump’s pattern of racism, including his attacks on black athletes and targeting of the exonerated Central Park Five.

“If you need this [tweet] in order to believe the guy is a racist, I mean, come on. Wake up and small the racism, really it isn't that hard.”