How Donald Trump Is the Bernie Madoff of Politics 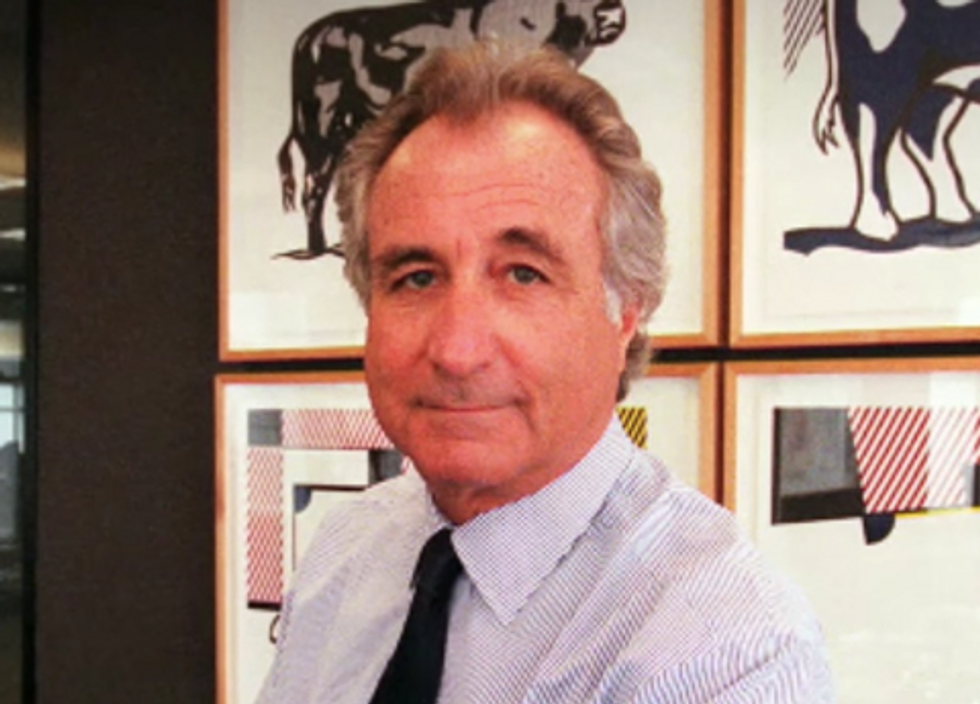 He was born in Queens and moved to Manhattan to make his fortune.

He got up in the morning and started telling lies and didn’t stop until he went to bed at night.

The scam he ran was based on telling everybody he was doing one thing, when behind the scenes he was doing another.

He had spoiled-brat kids who’ve never done anything but work for their daddy, who live in high-rise condos in New York, go out to the best restaurants, vacation in the south of France and spend their daddy-gotten millions.

Trump and Madoff are lying, thieving, soulless luxo-thugs for whom chasing the almighty dollar and lying practically every minute of every day was their reason for being.

They even got involved in their scams the same way: Almost by accident.

Madoff started out running a hugely successful business on the backroom end of stockbroking, completing trades for larger firms like Charles Schwab and making markets in small stocks not listed on the major exchanges. Most of his money was made in the so called “pay for order flow,” whereby Madoff was able to legally skim off 12.5 cents between the buy and sell price of each trade. He pumped up his business by paying firms like Schwab a few cents per trade to funnel their business through his firm. But in the 1990’s, the share of the trading spread was cut from 12.5 cents to 6.5 cents, and in 2001, it was slashed to a penny. Madoff’s main source of funds was drying up.

To make up for his losses, on a separate floor of his building, Madoff started a shoestring investment firm with a few employees and a lot of secrecy. The business was a kind of hedge fund when it began, but Madoff attracted his investors in a unique way, by guaranteeing them a return on their investments. When Madoff’s investments of his clients’ funds failed to make the profits he was promising them, he stopped investing his funds in the market and started paying a few investors' profits from new money he brought into his fund with big promises, big dreams and big lies. Madoff was the best investor anyone had ever seen. You could give him your money and sit back and not worry about a thing. Bernie would take care of everything. It was a classic Ponzi scheme.

When Madoff’s scam blew up in 2008, he told prosecutors and interviewers he couldn’t remember exactly when it began. “It kind of happened by accident,” he told one interviewer.

Trump began at his father’s real estate firm in Queens, building apartment buildings and renting out apartments. The business produced enough money to make his father a very rich man. But that wasn’t enough for Trump. He took an initial loan from his father and his connections to investors who wanted to put their money in real estate and moved to Manhattan. Trump began slapping his name on buildings all over Manhattan. But putting up buildings and selling condos and collecting rents wasn’t enough for Trump, so he branched out into casinos in Atlantic City, an airline, a phony college called “Trump University” and everything from frozen steaks to Trump vodka and bottled water.

When his casinos went belly-up, Trump vodka took a powder, Trump steaks sat in their freezers and his investments in buildings like the Plaza Hotel failed to make money, Trump turned to the banks. “I’m the king of debt!” he told one interviewer as his fortunes soared and fell. When one too many bankruptcies drove away the banks, he started unloading condos to Russian oligarchs, who paid in cash, and plastering the Trump on hotels and condo developments in places like Azerbaijan and Panama. Nobody could tell how much money he was worth, so he lied. Six billion, 10 billion, the Forbes list of the richest Americans. Who knew? He just kept lying.

All the while, he was dabbling in politics. He toyed with running for president in 1999, forming an exploratory committee and eventually running in Reform Party primaries before pulling out in 2000. He flirted with running again in 2004 and 2012, eventually endorsing Mitt Romney in that election and gaining a foothold in the Republican Party by obsessively pushing the racist lie that President Obama wasn’t born in the United States and was likely a Muslim.

Sound familiar? Madoff learned he could rake in the bucks by lying his head off to investors.  Trump was learning he could gain political currency by lying about everything from Obama’s birthplace to the evils of immigration.

When Trump announced he was running in 2015, his campaign was a shoestring organization with a small office in Trump Tower, a few political professionals for employees and his private jet, which he used to fly to rallies and Republican Party debates. People who worked for Trump at the early part of his campaign, like Sam Nunberg, have told interviewers that Trump never expected to win his race for president, figuring it was another exercise in expanding his brand. He’d build up his profile and use his fame to expand his business.

Sound familiar? Madoff attracted more investors than he ever expected, too. He brought in more and more money, owed more and more profits. Trump started attracting more votes than he expected. He expanded his band-of-amateurs campaign staff by adding professional liars and crooks, like Paul Manafort, and people with shady international connections, like George Papadopoulos and Carter Page.

When both men saw their fortunes soar unexpectedly, they knew exactly what to do.

Madoff’s victims trusted him so implicitly, they kept giving him money right up until the day his Ponzi scheme fell apart. Madoff couldn’t have pulled off his scam without a few big banks and investment firms turning a blind eye to his obvious crimes.

Trump’s voters trusted him implicitly. They’ve kept giving him their support – 89 percent of Republicans have a positive view of this president, according to the latest polls – even in the face of his lies as they’ve mounted one after another, day after day. And Trump couldn’t have pulled off his scam without an entire political party turning a blind eye to his obvious crimes.

Investigators have spent years trying to unwind how much money Madoff stole. Prosecutors initially estimated the total fraud to be about $65 million. Investigators for Irving Picard, the trustee assigned by the courts and the SEC to search for Madoff’s millions, estimated later that as much as $36 billion was invested with Madoff. Eighteen billion was returned as profits to a few investors, and the other $18 billion was lost.

Sounds a lot like Trump, doesn’t it? Trump pushes through a tax cut for a few billionaires and millionaires which returns billions to their bank accounts. Meanwhile, the deficit balloons to $1 trillion for the first time in history, leaving ordinary taxpayers stuck with the bill.

How does that old saying go? There’s a sucker born every minute?

Words to live by for Bernie Madoff and Donald Trump, fast-talking New York scam artists, soul brothers from different mothers. Madoff ended up being convicted of 11 felonies and sentenced to prison for 150 years. The feds auctioned off his collection of expensive watches, his Upper East Side penthouse, and his houses in Palm Beach, Montauk and the French Riviera. He will die behind bars.

We’ll have to wait and see how following the old gambler’s creed works out for the man currently occupying the White House.