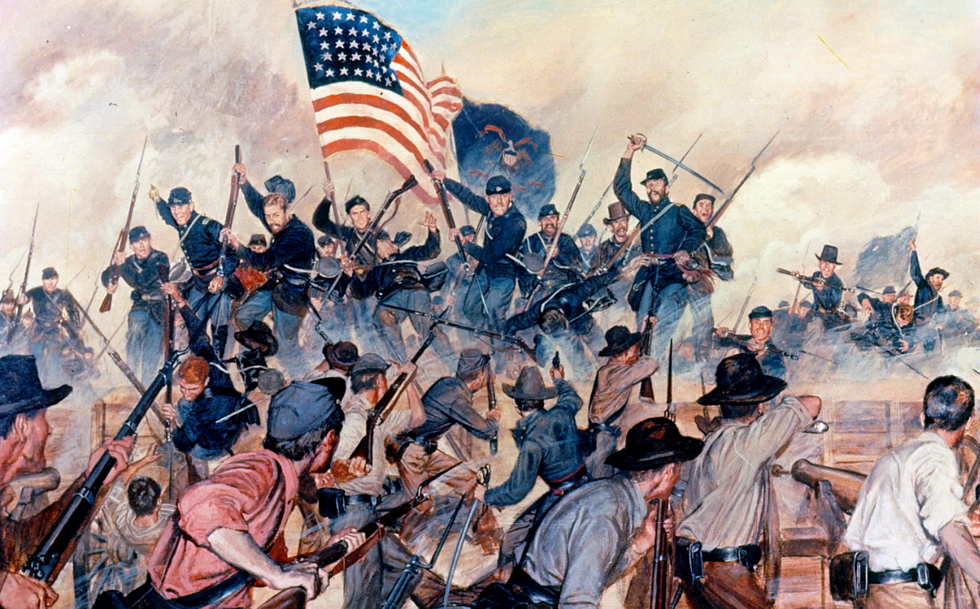 A new arena in our burgeoning political circus has opened in the form of short-take political commentary: American Civil War, 2.0. Not restricted to 4chan, alt-left or alt-right, it grows instead from the fever swamps of what was once called the respectable middle. Examples of these predictions can be found here, here and here.  And one knows it’s “a thing” when Twitter features a parody hash tag, #SecondCivilWar.

Few of these forecasters see a repeat of our last civil war. No attacks on a Fort Sumter followed by militia mobilization and hot war between rival governments. Most writers wisely modify Civil War 2.0 with adjectives such as “soft” or “cold” or other words short of “lethal.” But most articles do share a gist: The differences between so-called “Red” and “Blue” America are now irreconcilable, traditional political remedies that once peaceably managed conflict are irretrievably broken, and thus, a separation of some sort is, or will soon, be necessary. And if necessity can be made a virtue, it will be somehow peacefully managed.

Before exploring the likelihood of civil war, forgive a hedge. Historians should be the last to dismiss these kinds of literary trends. Fin de siÃ¨cle Europe saw the publication of many dystopian novels envisioning the monstrous war that finally arrived in 1914. And if the events foretold in films such as Fail Safe and Seven Days in Mayor The Day After television series did not come to pass, they nonetheless offer a window on contemporary mindsets. Besides, America was founded in revolution and reformed by civil war. As Saul Bellow once observed through a character, “Nothing is so rum that it can’t be true.” Or, I would add, as might become true.

But is a civil war, soft, hard, cold or hot, in our cards? Color me skeptical. As a Civil war historian and a sometime journalist, I covered some tragically real insurgencies and counterinsurgencies in Iraq and Afghanistan. They weren’t fought on Twitter or websites. Usually, they show up in Taliban night letters quickly followed by assassinations, or in market place IEDs that leave scattered body parts of innocent civilians. And despite our political differences, few Americans have an appetite for that kind of domestic conflict. Lefties and Righties still enjoy going to the mall. So I’ll default to a bumper sticker of my youth: “What if they gave a war and nobody came?” And at least for now, few Americans would come to a violent civil war. A car with Massachusetts’s plates can drive still through Texas without worrying overmuch about RPGs.

Real civil wars have a pattern. One or more consequential constituencies,

â— Have grievances decades or even centuries in the making that they believe are existential; and,

â— They cease believing that the current power structure offers redress of such grievances; and,

â— They have the material capacity, sometimes with the help of self-interested third parties, to inflict sustained violence on opposing constituencies; and,

â— They possess in sufficient mass the will and organization to inflict this violence as well as absorb the inevitable counterattacks.

As for a cold civil war or peaceable separation, it’s about time to expose the fraudulence of the construct on which such predictions are based: “Red” vs. “Blue” states. This meme, once convenient for summarizing presidential election returns, now corrupts many analyses of our domestic circumstance. Consider these points:

â— Unlike 1860, the United States is now a highly integrated economic, social and legal polity. Class conflict has replaced sectional conflict, and little of what’s disputed—immigration, abortion, gun control—amounts to a rationale for disunion.

â— But no region is actually “Blue” or “Red.” For example, in so-called “deep Blue” California, of 13,237,498 votes cast for Trump or Clinton, 33.8% voted for Trump. If you’re touting separation “because Trump,” or what you fear about his supporters, you’d better have a plan to deal with the 4,483,810 Californians who voted for Trump. The Cherokee Removal, a crime and stain on our history was the last time government enforced a mass population transfer. The alternative is secession within secession. For further reading, see West Virginia, State of.

â— “Red” and “Blue” differences are much exaggerated, especially within dead tree and social media silos. A vote for Clinton wasn’t necessarily a vote to bust the Union and few of Missouri’s Trump voters envisioned expelling Illinois from the republic.

Sadly for this moment in time, social media has become an influence multiplier, whose pathways of unbounded ids are coupled with the routine portrayal of political extremism as representative. The result is a daily replay of something like Orson Welles’s famous 1938 radio hoax, “War of the Worlds,” true fake news about an alien invasion that reportedly led to panic in the streets.

The updated version is a mountain of “truthiness” about shadowy Russians, political murders, FBI plots, stolen elections, Kenyan births, and Donald J. Trump, slave to Vladimir Putin. The growing cult of Civil War, 2.0, is truthiness-as-prediction. It says more about elite anxiety, bipartisan virtue signaling, and the replacement of hard analysis by the studied ignorance “social” media. As that journalist of our moment, Michael Wolff declared with perfect sincerity, “If it rings true, it is true.”

Civil War, 2.0? Nah. I’ll stick with one of my late mother’s favorite sayings: “Always try to separate the noise from the thing that makes the noise.”