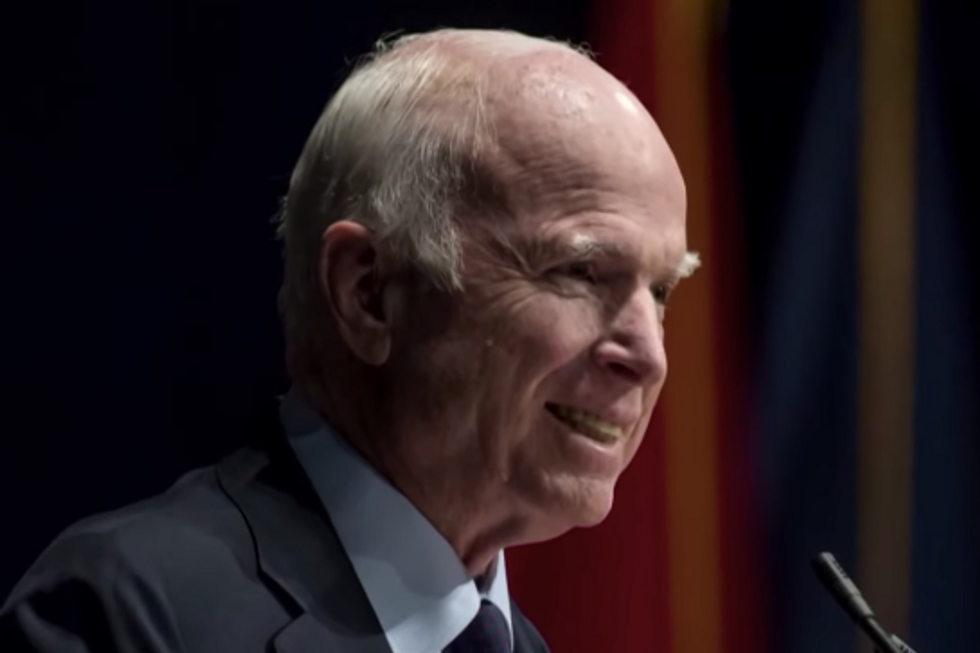 Donald Trump is not the only Republican to be spitting on the memory of Sen. John McCain—it’s a long list, and one that includes all three candidates for U.S. Senate in McCain’s home state of Arizona. Felonious former Sheriff Joe Arpaio, former state Sen. Kelli Ward, and Rep. Martha McSally have all embraced Trump and rejected McCain, along with retiring Sen. Jeff Flake, who they’re all hoping to replace.

Ward’s suggestion that McCain announced he was stopping cancer treatment to steal her thunder as she began a campaign bus tour wasn't her first such classy moment, and while she deleted her “it’s all about me” moment from Facebook and expressed pro forma condolences for McCain’s death, she hasn’t backed off much: “As of Sunday afternoon, Ward’s campaign website bore no mention of McCain’s death, and was still promoting an old statement that calls him ‘a problem for President Trump’s agenda.’”

For his part, Arpaio pivoted from praising John McCain to complaining that Cindy McCain had blocked him on Twitter. McSally has managed to avoid overt offense since it became clear that McCain’s death was imminent, but just a couple weeks ago:

McCain’s daughter Meghan was sharply critical of the congresswoman this month after she mimicked Trump and neglected to mention the full name of the “John S. McCain National Defense Authorization Act.”

“McSally’s inability to even mention my father’s name when discussing the bill named in his honor is disgraceful (just as it was with Trump). I had such higher hopes for the next generation of leadership in my home state,” Meghan McCain wrote.

This is today’s Republican Party. They’re petty and mean-spirited to the bitter end if you’re not one of their own—and the list of who’s one of their own is shrinking fast as Republicans move from targeting poor people and non-white people to targeting their own elected officials if they commit the sins of criticizing Donald Trump or insufficiently loathing all non-Republicans at all times.