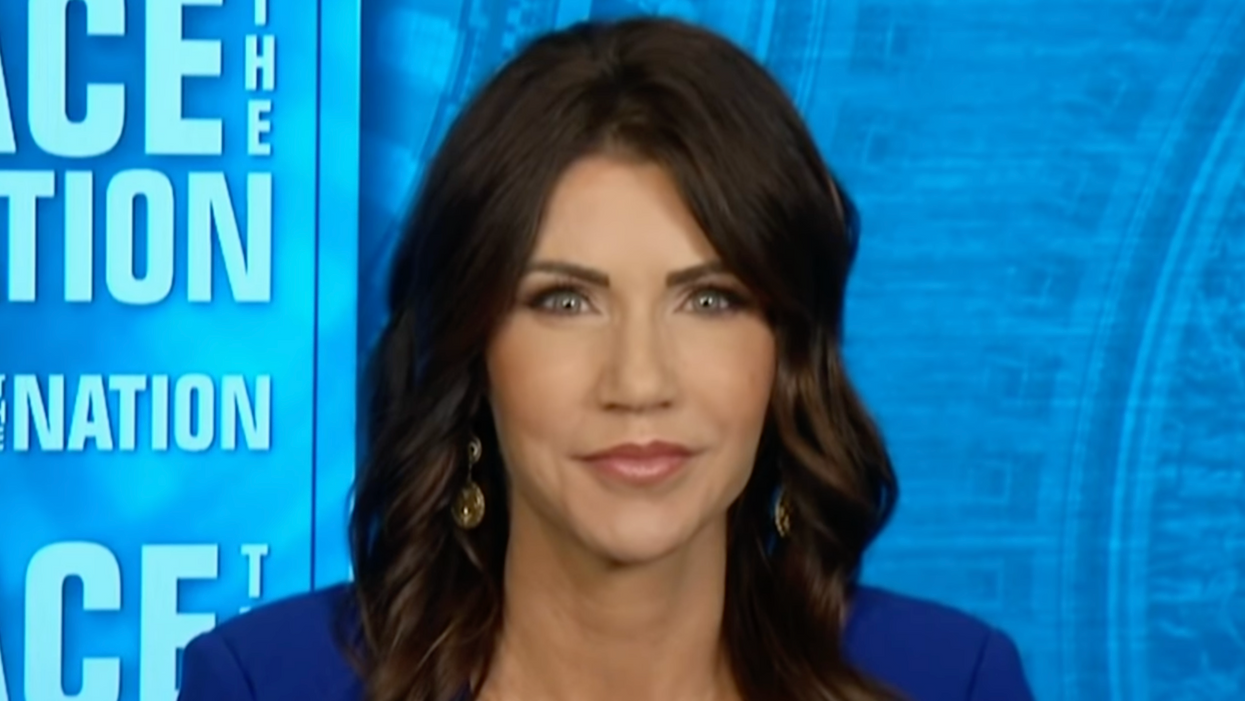 South Dakota Gov. Kristi Noem had a busy weekend, speaking at the 2021 Conservative Political Action Conference in Orlando, Florida and talking to host Margaret Brennan for CBS News' "Face the Nation." Noem, a loyal ally of former President Donald Trump, was a hit at CPAC 2021 — where the Republican governor fit fight in with the event's Trumpian Culture War themes. But on "Face the Nation," it was obvious that Brennan wasn't going to let her off with the type of softball questions she would get from Sean Hannity or Laura Ingraham at Fox News.

South Dakota has not fared well during the COVID-19 pandemic, suffering some of the highest infectious rates in the United States — and Brennan pointed out that Noem, in contrast to some governors, has not been aggressive when it comes to social distancing restrictions or encouraging the use of face masks.

Brennan told Noem, "You have the highest death rate in cumulative COVID deaths per million in the country. The CDC says you have the eighth highest death rate per capita now…. I know you're a conservative and you care about the sanctity of life. So, how can you justify making decisions that put the health of your constituents at risk?"

Noem gave an answer that was both defense and evasive, telling Brennan, "Those are questions that you should be asking every other governor in this country as well…. Regionally, we have seen the virus hit the country very differently, and it hit the Midwest earlier than it did the South — and now, the East Coast and the West Coast. So, we are still dealing with this virus in this country."

Pressed on Face the Nation about a Republican governor citing South Dakota as an example of how not to respond to C… https://t.co/GPPYbsrQ4S
— Aaron Rupar (@Aaron Rupar) 1614528370.0

"Listen, what we did was allow people to make decisions for themselves," Noem told Brennan. "We gave them all the information on this virus — how to protect their health — and then, we allowed them to make decisions on what they would do. My question is, if we had mandated that people had to stay home, if we had mandated that businesses had to be closed, would that have made a difference? I would argue that it wouldn't have."

Speaking at CPAC 2021, Noem claimed that South Dakota is a COVID-19 success story — even though it is the exact opposite — and pandered to the crowd by attacking Dr. Anthony Fauci. Noem drew applause from the Trumpistas in attendance when she said, "Dr. Fauci is wrong a lot."

Gov. Kristi Noem is speaking and pushing the idea that public health regulations in response to a pandemic that has… https://t.co/cphz4B6GEJ
— Aaron Rupar (@Aaron Rupar) 1614459220.0

South Dakota is in the bottom 10 in the country in terms of Covid mortality and yet she's out here taking a victory… https://t.co/JNgTelciVV
— Aaron Rupar (@Aaron Rupar)1614459311.0