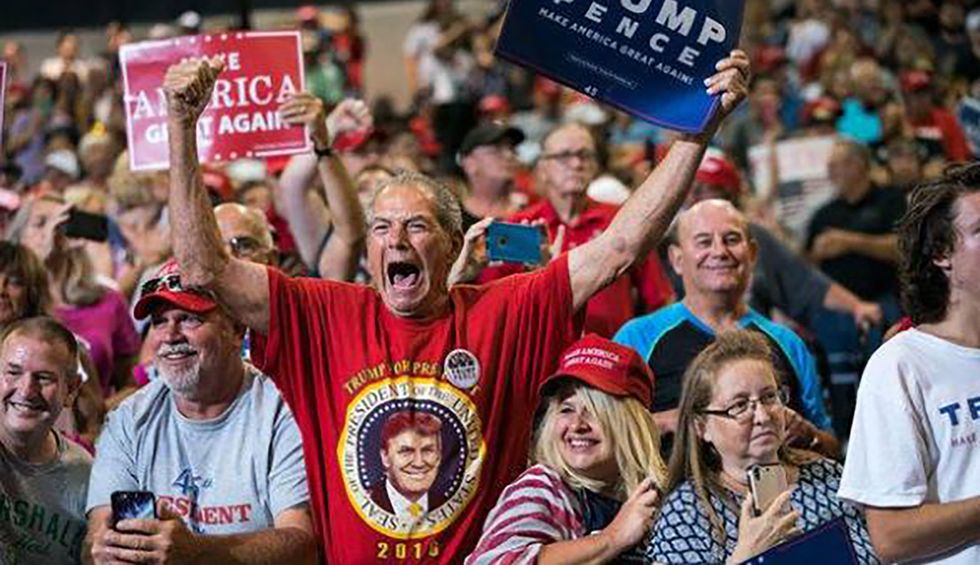 Yale psychiatrist Bandy X. Lee is leading a group of mental health professionals calling for President Donald Trump's ouster from office or the "complete removal" of his decision-making powers on the coronavirus response.

Dr. Lee, a forensic psychiatrist at Yale School of Medicine and editor of the bestseller "The Dangerous Case of Donald Trump," recently convened a panel on the coronavirus in her role as president of the World Mental Health Coalition. The panel discussed Trump's bungled response to the crisis and his attempts to downplay the threat posed by the pandemic.

The panel issued a "prescription for survival" arguing that Trump must be removed from office, whether through the 25th Amendment, a second congressional impeachment or his resignation. Alternatively, the panel recommended an intervention by mental health professionals or an act of Congress to establish a Coronavirus Crisis Department headed by the Centers for Disease Control to ensure the safety of the public.

"We have a presidency that is incapable of protecting lives but is making a global pandemic worse — not just through incompetence and ignorance, but through a dangerous detachment from reality, a need to convey false information, and other symptoms," the group said.

Lee spoke with Salon about her group's recommendations and Trump's handling of the crisis. Her views represent only those of the World Mental Health Coalition, an organization of mental health professionals dedicated to sharing expert knowledge for the betterment of societal mental health.

Trump has linked the federal government's aid to states to governors being nice to him. What does this tell you about the president's thinking as thousands of people die around the country?

One is only capable of doing what one's mental capacity allows. The disastrous reality about our situation is that we have chosen, for whatever reason, to pretend that someone who lacks the capacity to be president can stay in the position of president. We are seeing the comic absurdity up front, where a person's emotional development is arrested at about age five, at best, and the far-reaching tragic consequences of handing that person the most powerful position on the planet. A five-year-old acting like one is normal; when an adult does this, either because of stunted growth or regression, it is pathological.

It is not just our country: At any other time in history, the U.S. would have led efforts to coordinate global fights against epidemics, but why would this president? His dismantling of the world's best global pandemic response system was unsurprising, since science-driven, prevention methods are the last thing a minute-by-minute person who lives in fantasy will care about, And above all he hates Barack Obama, who set it up. We might not even have an issue right now if he hadn't axed the CDC expert who was stationed in China for that reason; scientists stopped SARS, which was the exact equivalent.

He also could never be made to take seriously surveillance and containment in the United States, being fixated only on travel bans. This is similar to his "germophobia" — which is about people, not germs — and we probably contributed to spreading the virus around the world. Someone who causes this kind of crisis is also incapable of containing it but will make it worse. He is setting the atmosphere for the nation and the world where every state will have to scramble for itself, and every country fend for itself, which means terrible inefficiency and a recipe for global conflicts, when we could have been uniting around fighting a common enemy.

Trump has gone back and forth on the threat posed by the coronavirus and his call to "reopen" the economy or "quarantine" people in New York. Does his management of the crisis pose a bigger risk amid the outbreak?

He will always choose the path of maximal risk, since he is always fighting reality. It is no accident that everything he says is the exact opposite of reality and what he says we should do is the exact opposite of what should be done. I frankly recognized what was happening and braced myself from the moment he said, "We have it totally under control." It meant that pandemic control, which depends heavily on early detection and early containment, would be totally unattended to, and we now see the results in our surpassing the case numbers of every nation on earth.

This is the same psychological method we use to evaluate a person who claims, "I alone can fix it," as exactly a person who will likely singlehandedly break things, and the one who declares he is "an extraordinarily stable genius" as the most exceptionally unstable person who has very little knowledge. Through my work in prisons, my mentor James Gilligan would say, "None feel as guilty as the saints, and none feel as innocent as the criminals." It is true: The psychology a person brings spells out what one will do.

We know that, before others' interventions, the president was sending us on a trajectory of 2.2 million deaths. So whether it is to lift federal guidelines on social distancing by Easter, just when American case numbers would be reaching their peak, or dragging his feet in providing medical supplies, which means pure carnage in a matter of weeks, he will try to get back to that psychological calibration as much as possible. Whatever reduction in deaths will not be by his doing, no matter what he consciously says, and quarantine or other measures can be expected to be purely punitive.

As more people fall victim to the coronavirus, how will Trump's supporters respond to him?

This is the scary part. While dense cities like New York will be hit the hardest first, Trump-supporting regions will ultimately bear the biggest brunt. They were the most likely to emulate the president when he called the virus a Democratic "hoax," to listen when he touted a toxic antimalarial drug as "like a cure" — one man died and his wife ended up in the ICU — and to copy him when he appeared in crowds and went around shaking hands. Indeed, people went as far as to hold "coronavirus parties" to get infected. Many of them live paycheck to paycheck, and when there is widespread suffering and death because they cannot afford medical care, when the government check runs out and they have no more livelihood while we may be entering an economic collapse that will not recover in our lifetimes, fury will inevitably build.

We know that Donald Trump is masterful at harnessing this fury. Many believed this was smart strategy, but it is actually pathology. And if you believe suffering and seeing the deaths of loved ones will bring Trump supporters to their senses, you are mistaken. His insatiable drive leads him to seduce and hypnotize the masses, and as he places them in a more perilous condition, they will cling to him more, defensively idealizing him, since the psychological cost of admitting his errors would be even greater.

The growing fury from the suffering will hence never be directed against him, but he will be able to re-channel it against any target he chooses. And all the cultic programming through Fox News and others works hand-in-hand with the natural contagion of symptoms that comes with having a president who has gone untreated — delusions, for example, are far more infectious than simple misinformation. When it gets very bad, it may reach a state that Carl Jung called "possession."

Is there any remedy for this, from your perspective?

Just as prevention goes a long way in pandemic control, prevention is critical here to stop further damage from both the viral pandemic as well as what I call Donald Trump's mental health pandemic.  Every moment counts now in terms of the need for his removal if we are to save thousands of lives as well as possibly the country. This is not a political recommendation but a medical one, and we have a prescription: If people go to RemoveTrump.info, they will see our "Prescription for Survival."