Why Democrats must choose between teachers and charter schools 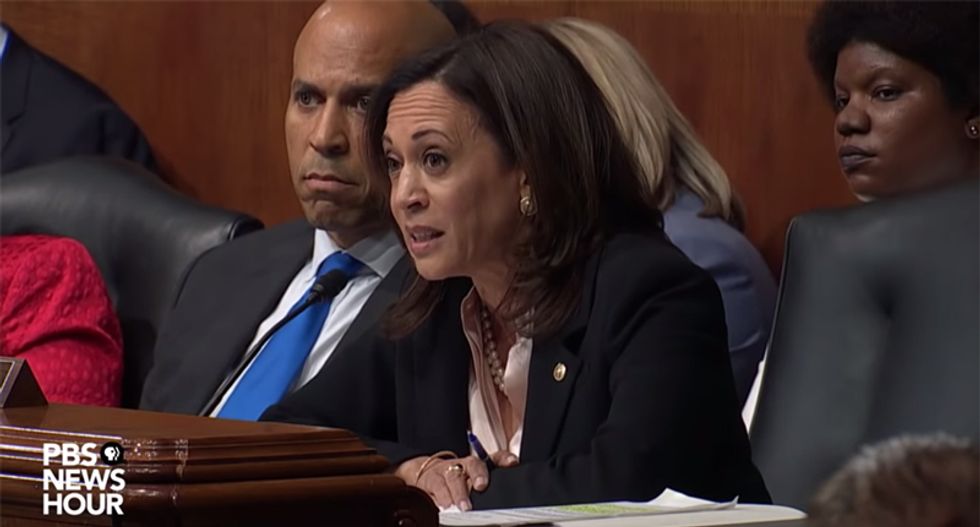 For years, the safe havens for education policy debate in the Democratic Party have been expanding pre-K programs and providing more affordable college, but in the current presidential primary contest, another consensus issue has been added to the party’s agenda: salary increases for K–12 classroom teachers. Kamala Harris has gotten the most press for coming out strongly for raising teacher wages, but other frontrunners including Joe Biden, Pete Buttigieg, and Bernie Sanders have also called for increased teacher pay.

But what will happen when a consensus issue like teacher salary increases comes into conflict with a lightning rod issue like charter schools? That’s a scenario currently playing out in Florida.

A recent law passed by the majority Republican Florida state legislature and signed by newly elected Republican Governor Ron DeSantis will force local school districts to share portions of their locally appropriated tax money with charter schools, even if those funds are raised for the express purpose of increasing teacher salaries in district-operated public schools. (Charter schools in Florida, as in many states, do not receive funds that are raised through bond referendums, mill levies, or other forms of local funding initiatives.)

Florida teachers have openly opposed the new law, and local school districts have taken it to court to have it overthrown. But given this new law, it’s not at all hard to imagine a scenario, even at the national level, where Democrats pushing to increase funds for teacher pay will have to confront an expanding charter school industry—and now voucher programs—that would claim their portion of that money to use as private institutions for whatever purposes they wish.

“An Effort to Redefine Public Schools”

“The problem with charter schools isn’t that they’re competing with public schools; it’s that they’re supplanting public schools,” says Justin Katz in a phone call. Katz, who is president of the Palm Beach County Classroom Teachers Association, recently helped organize a rally in West Palm Beach where more than 200 teachers and public school advocates showed up to voice their opposition to distributing funds raised by local tax increases to charter schools.

The protest “was very specific, local, and personal,” Katz explains, because voters in the county had approved $200 million in funding for their schools in a measure that specified increases could be used for teacher raises in traditional public schools and not for funding charter schools.

The referendum was overwhelmingly approved by more than 72 percent of voters. But under the proposed new law, a proportional share of 10 percent, or about $20 million a year, would have gone to the county’s 49 charters. Only a final hour amendment in the state’s Senate averted the loss, when the bill was altered to apply to future bond referendums only.

The language of the referendum that was passed was “crystal clear,” Katz says, that money raised by the bond efforts would not go to charter schools. But the loophole being used to argue for charters to get their share is the use of the term “public schools.”

The new law is “an effort to redefine what are public schools,” he says, in order to give charter schools a right to claim a portion of any publicly raised education funds, regardless of the intent for raising the money. He fears that once charters claim that right, private schools in the state’s school voucher programs will claim it too.

What Katz fears aligns to Governor DeSantis’ recent comment that “if the taxpayer is paying for education, it’s public education,” which seems to mean that virtually any education provider—charter schools, private schools, and even homeschooling—is “public education” and therefore has rightful claim to public funds meant for teachers, local schools, and any initiative voters approve, regardless of the intent.

“Our objection to sharing bond referendum money with charter schools is that it’s not what the money was intended for,” says Anna Fusco, the president of the Broward Teachers Union.

Broward, the county immediately to the south of Palm Beach, also recently passed a local referendum that raised $93,000, enough funding to boost teacher salaries by as much as $8,000. Like the Palm Beach initiative, the Broward referendum funds were intended not to go to charters, although the language was not as specific. Broward has over 90 charter schools educating 45,919 students, over 20 percent of the district’s students.

Fusco says, “it was fair to not include charters in the referendum” for several reasons. Because nearly half the charter schools in the state are managed by for-profit companies, new funding voters had approved for teachers could instead be used to expand profits for charter management companies.

Fusco also believes many charter schools are “non-public” because they “get to choose their students.” Studies have shown Florida’s charter schools, compared to public schools, serve significantly lower percentages of low-income students, students with disabilities, and students who struggle with English.

She also points to other recent legislation that gave charter schools access to state funding for building leases and executive pay and big new loopholes for bypassing local school boards and employing uncertified teachers. She contends the law undermines the charter industry’s argument for needing local referendum money. And because of the new loopholes, bond referendum money would now go to charter schools even though they can bypass the very school boards that pushed for the bonds, and even if the money was earmarked for wage hikes for certified teachers, charters could use the money to hire uncertified teachers who lower the status of the teaching profession.

“This is part of an incremental and deliberate effort to take apart our public school system,” says Karen Castor Dentel in a phone call. Castor Dentel is a board member of Orange County Public Schools and former Democratic member of the Florida House of Representatives. A native of Florida and graduate of the state’s public schools, she taught in an elementary school last year, and her mother was Florida Education Commissioner from 1987 to 1994.

Castor Dentel sources the assault on the state’s public schools to former Governor Jeb Bush, who initiated a series of reforms he called the A+ Plan that included imposing a school grading system based on test scores. Gradually the test-based system was used to evaluate teachers too—including evaluating teachers based on the scores of students they don’t even teach.

Bush’s plan also called for changing teachers’ salary increases from a traditional step plan based on seniority and continuing education to a system of bonuses and merit-pay schemes based on test scores and other measures. The most preposterous of these schemes based teacher bonuses on scores they earned on their college entrance exams. Districts are now rushing to abandon these plans.

While Bush’s plan cracked down on teachers, it loosened the regulatory environment for charter schools and provided them with new funding sources. By the time Bush left office in 2007, charter schools across the state had grown from a modest 30 to well over 300. Today there are 655.

The educational success of the A+ Plan continues to be hotly debated, but it’s undeniable that the welfare of public school teachers in the state suffered significantly under its regime.

The state has dropped to 46 on a national scale of average teacher salaries, and at least one credible analysis has deemed the state the fifth worst state in the nation to be a teacher.

Due to low pay, deteriorating employee benefits, and demoralizing working conditions, Florida teachers have refused to work beyond school hours, increasingly called in sick, and are leaving their jobs at higher rates. The state now has an acute teacher shortage and struggles to fill vacant positions. And in what’s being called a “silent strike,” experienced teachers are leaving the profession early, and people who would be highly qualified for teaching are choosing other employment opportunities.

In the meantime, charter schools have flourished and now account for nearly all the state’s growth in student enrollment.

“It’s been a long game,” Castor Dentel says. “The agenda has been imposed so slowly over the past 20 years that people don’t notice. It’s a cancer that started in Florida and is now spreading everywhere.”

Have Democrats Found Their Way?

If the Florida model for education is a disease, Democrats have certainly been infected. Much of what was in Bush’s A+ Plan formed the policy agenda of the Obama administration, which also pushed for evaluating schools and teachers based on test scores and expanding charter schools.

“Democrats have been promoting a conservative ‘school reform’ agenda for the past three decades,” education historian and bestselling author Diane Ravitch observed. “Whatever the motivations, the upshot is clear: The Democratic Party has lost its way on public education.”

But because presidential hopefuls are rallying around teacher salary increases, have Democrats found their way back?

No doubt, what got Democrats to pay attention to the plight of school teachers was the series of teacher protests staged across the country last year and into this. The highly visible strikes emboldened candidates running in 2018 midterm elections to campaign for increasing investments in public schools. The teacher uprisings also took the schools issue away from Republicans and made it less about “accountability” and more about the massive cuts political leaders in both parties have enacted to the system.

In Florida, teachers are forbidden to strike by law and the state constitution. “Any teachers engaging in such action would endanger their professional status,” explains Fusco. “They could lose their licenses and jobs for life and lose their pensions too. Our union will never, ever encourage a walk out.”

However, the laws haven’t stopped teachers from speaking out against efforts to divert local tax dollars for teacher pay to charter schools. Their protest messages are about educating voters on the impact of charters rather than opposing them outright.

Teachers who protested in Palm Beach County, according to Castor Dentel, “made their protests more about the responsible use of tax dollars.”

“Parents and voters are just starting to get engaged, but they aren’t always clear on the issues,” she says. “They don’t understand that charter schools aren’t really like public schools.”

“For now, our effort to push back has to rely on educating people on what these bills in the state legislature are really doing,” says Fusco. “We hope people who aren’t in education and don’t even have children in schools listen to us.”

“This obsession with crushing public schools to promote privately operated things that are being called ‘public’ is not universally accepted,” says Katz, “and people are just starting to sour on it.”

Maybe Democrats will too.