'The West Antarctic ice sheet was gone in the past': Scientists are spooked about South Pole's stability

Flying over Antarctica, it’s hard to see what all the fuss is about. Like a gigantic wedding cake, the frosting of snow on top of the world’s largest ice sheet looks smooth and unblemished, beautiful and perfectly white. Little swirls of snow dunes cover the surface.

But as you approach the edge of the ice sheet, a sense of tremendous underlying power emerges. Cracks appear in the surface, sometimes organized like a washboard, and sometimes a complete chaos of spires and ridges, revealing the pale blue crystalline heart of the ice below.

As the plane flies lower, the scale of these breaks steadily grows. These are not just cracks, but canyons large enough to swallow a jetliner, or spires the size of monuments. Cliffs and tears, rips in the white blanket emerge, indicating a force that can toss city blocks of ice around like so many wrecked cars in a pileup. It’s a twisted, torn, wrenched landscape. A sense of movement also emerges, in a way that no ice-free part of the Earth can convey – the entire landscape is in motion, and seemingly not very happy about it. 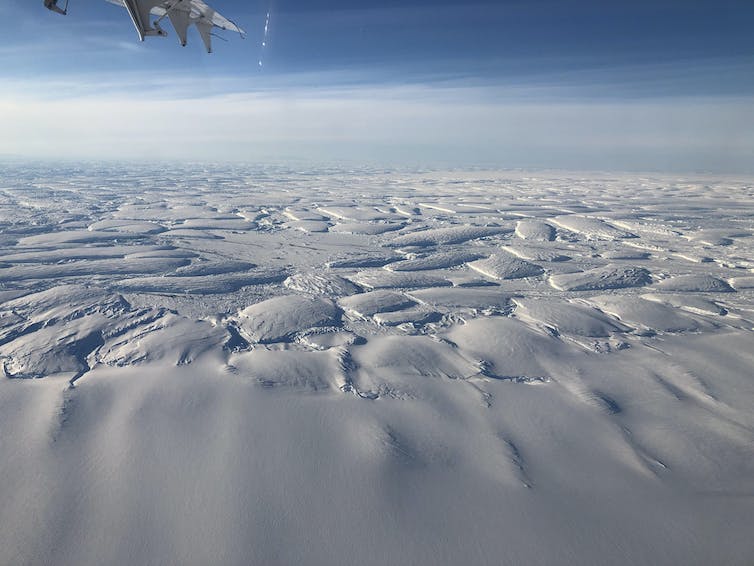 Antarctica is a continent comprising several large islands, one of them the size of Australia, all buried under a 10,000-foot-thick layer of ice. The ice holds enough fresh water to raise sea level by nearly 200 feet.

Its glaciers have always been in motion, but beneath the ice, changes are taking place that are having profound effects on the future of the ice sheet – and on the future of coastal communities around the world.

Antarctica is where I work. As a polar scientist I’ve visited most areas of the ice sheet in more than 20 trips to the continent, bringing sensors and weather stations, trekking across glaciers, or measuring the speed, thickness and structure of the ice.

Currently, I’m the U.S. coordinating scientist for a major international research effort on Antarctica’s riskiest glacier – more on that in a moment. I have gingerly crossed crevasses, trodden carefully on hard blue windswept ice, and driven for days over the most monotonous landscape you can imagine. 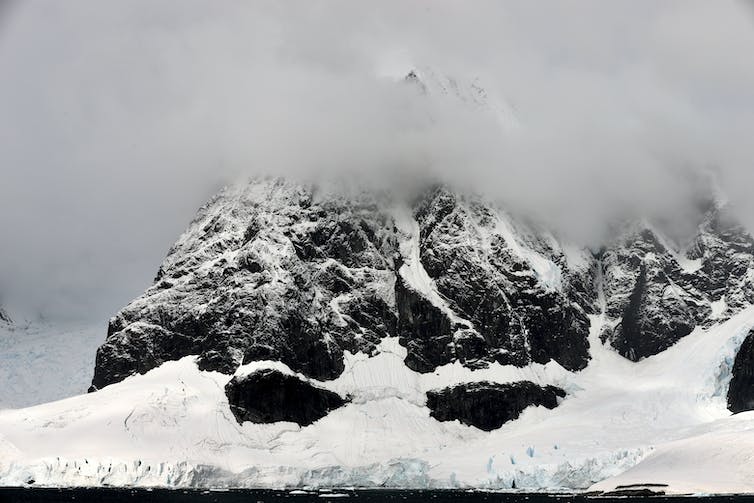 Mountains direct the flow of glaciers toward the sea. 66 North via Unsplash.

For most of the past few centuries, the ice sheet has been stable, as far as polar science can tell. Our ability to track how much ice flows out each year, and how much snow falls on top, extends back just a handful of decades, but what we see is an ice sheet that was nearly in balance as recently as the 1980s.

Early on, changes in the ice happened slowly. Icebergs would break away, but the ice was replaced by new outflow. Total snowfall had not changed much in centuries – this we knew from looking at ice cores – and in general the flow of ice and the elevation of the ice sheet seemed so constant that a main goal of early ice research in Antarctica was finding a place, any place, that had changed dramatically. 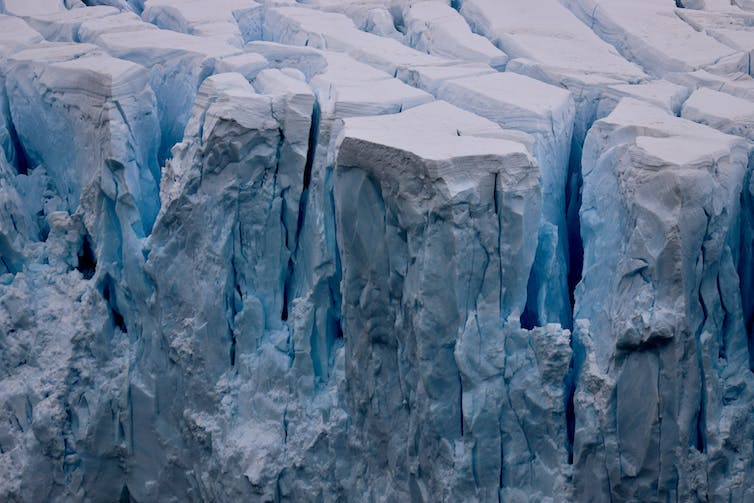 Ice breaks off the front of a glacier in Antarctica. 66 North via Unsplash. 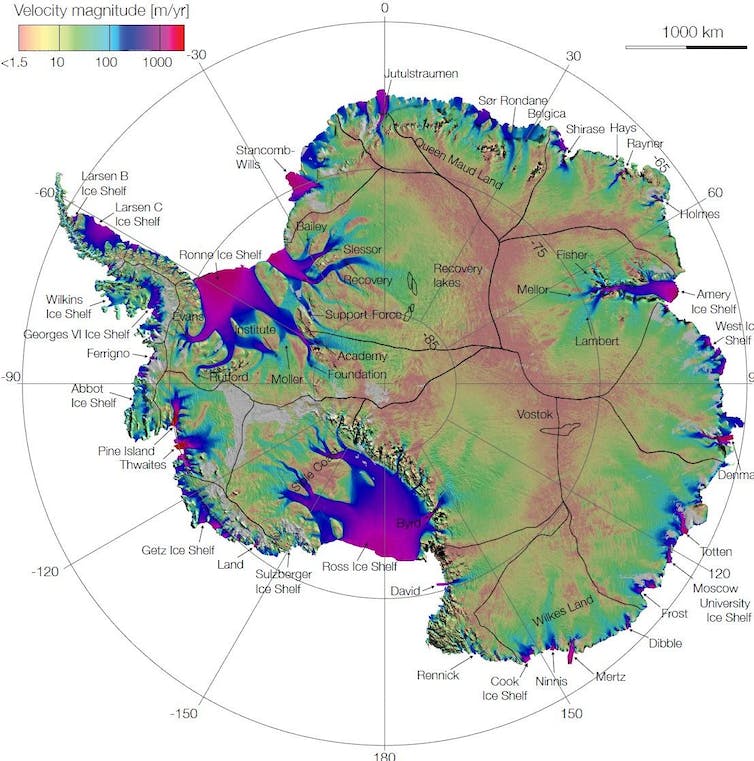 A map of Antarctica seen from above, most of it the ice sheet, shows the velocity of the ice flow ice. Thwaites Glacier is on the left. NASA's Goddard Space Flight Center Scientific Visualization Studio

But now, as the surrounding air and ocean warm, areas of the Antarctic ice sheet that had been stable for thousands of years are breaking, thinning, melting, or in some cases collapsing in a heap. As these edges of the ice react, they send a powerful reminder: If even a small part of the ice sheet were to completely crumble into the sea, the impact for the world’s coasts would be severe.

Like many geoscientists, I think about how the Earth looks below the part that we can see. For Antarctica, that means thinking about the landscape below the ice. What does the buried continent look like – and how does that rocky basement shape the future of the ice in a warming world?

Visualizing the world below the ice

Recent efforts to combine data from hundreds of airplane and ground-based studies have given us a kind of map of the continent below the ice. It reveals two very different landscapes, divided by the Transantarctic Mountains.

In East Antarctica, the part closer to Australia, the continent is rugged and furrowed, with several small mountain ranges. Some of these have alpine valleys, cut by the very first glaciers that formed on Antarctica 30 million years ago, when its climate resembled Alberta’s or Patagonia’s. Most of East Antarctica’s bedrock sits above sea level. This is where the city-size Conger ice shelf collapsed amid an unusually intense heat wave in March 2022. 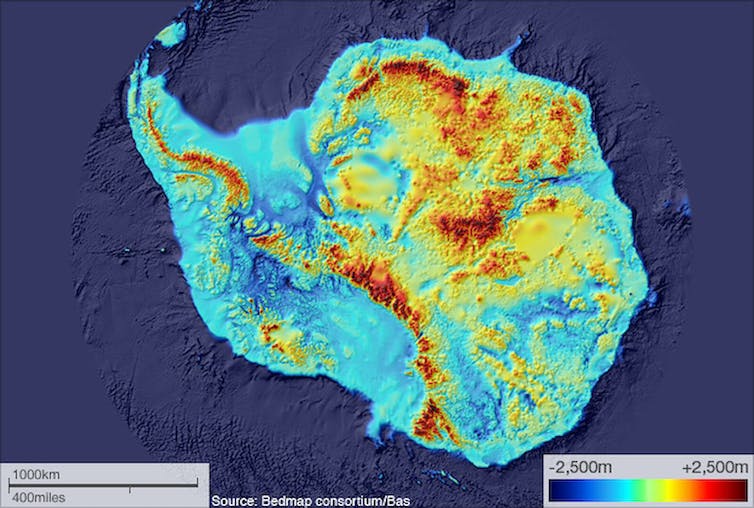 Below the ice, recent studies have mapped Antarctica’s bedrock and show much of the west side is below sea level. Bedmap2; Fretwell 2013.

In West Antarctica the bedrock is far different, with parts that are far deeper. This area was once the ocean bottom, a region where the continent was stretched and broken into smaller blocks with deep seabed between. Large islands made of volcanic mountain ranges are linked together by the thick blanket of ice. But the ice here is warmer, and moving faster.

As recently as 120,000 years ago, this area was probably an open ocean – and definitely so in the past 2 million years. This is important because our climate today is fast approaching temperatures like those of a few million years ago.

The realization that the West Antarctic ice sheet was gone in the past is the cause of great concern in the global warming era.

Early stages of a large-scale retreat

Toward the coast of West Antarctica is a large area of ice called Thwaites Glacier. This is the widest glacier on earth, at 70 miles across, draining an area nearly as large as Idaho.

Satellite data tell us that it is in the early stages of a large-scale retreat. The height of the surface has been dropping by up to 3 feet each year. Huge cracks have formed at the coast, and many large icebergs have been set adrift. The glacier is flowing at over a mile per year, and this speed has nearly doubled in the past three decades. 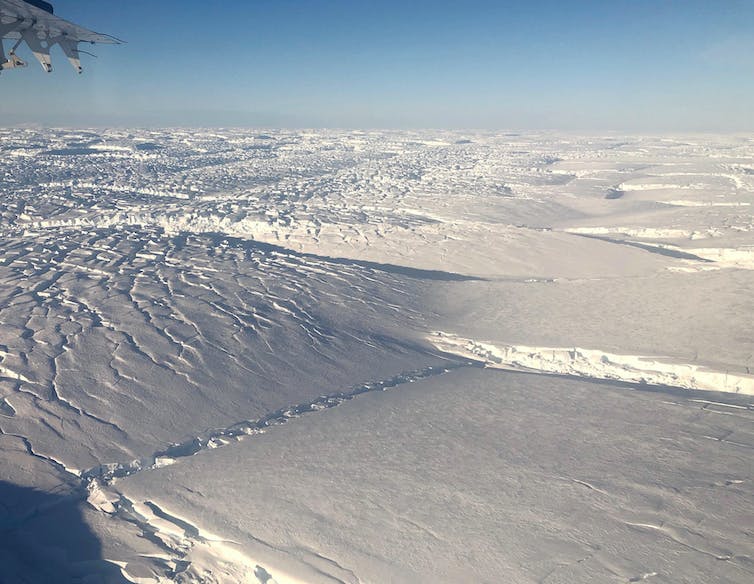 From above, fractures are evident in the Thwaites Glacier. Ted Scambos.

This area was noted early on as a place where the ice could lose its grip on the bedrock. The region was termed the “weak underbelly” of the ice sheet.

Some of the first measurements of the ice depth, using radio echo-sounding, showed that the center of West Antarctica had bedrock up to a mile and a half below sea level. The coastal area was shallower, with a few mountains and some higher ground; but a wide gap between the mountains lay near the coast. This is where Thwaites Glacier meets the sea.

This pattern, with deeper ice piled high near the center of an ice sheet, and shallower but still low bedrock near the coast, is a recipe for disaster – albeit a very slow-moving disaster.

Ice flows under its own weight – something we learned in high school earth science, but give it a thought now. With very tall and very deep ice near Antarctica’s center, a tremendous potential for faster flow exists. By being shallower near the edges, the flow is held back – grinding on the bedrock as it tries to leave, and having a shorter column of ice at the coast squeezing it outward. 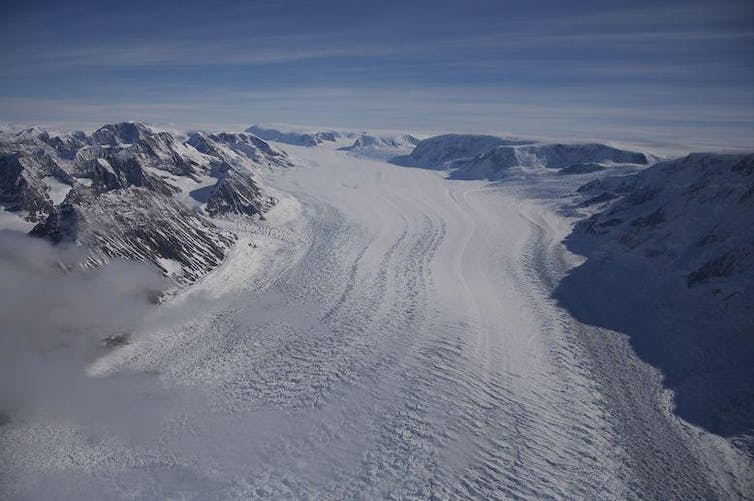 An Antarctic glacier flows toward the sea. Erin Pettit:

If the ice were to step back far enough, the retreating front would go from “thin” ice – still nearly 3,000 feet thick – to thicker ice toward the center of the continent. At the retreating edge, the ice would flow faster, because the ice is thicker now. By flowing faster, the glacier pulls down the ice behind it, allowing it to float, causing more retreat. This is what’s known as a positive feedback loop – retreat leading to thicker ice at the front of the glacier, making for faster flow, leading to more retreat.

Warming water: The assault from below

But how would this retreat begin? Until recently, Thwaites had not changed a lot since it was first mapped in the 1940s. Early on, scientists thought a retreat would be a result of warmer air and surface melting. But the cause of the changes at Thwaites seen in satellite data is not so easy to spot from the surface.

Beneath the ice, however, at the point where the ice sheet first lifts off the continent and begins to jut out over the ocean as a floating ice shelf, the cause of the retreat becomes evident. Here, ocean water well above the melting point is eroding the base of the ice, erasing it as an ice cube would disappear bobbing in a glass of water.

Warming water is reaching under the ice shelf and eroding it from below. Scambos et al 2017

Water that is capable of melting as much as 50 to 100 feet of ice every year meets the edge of the ice sheet here. This erosion lets the ice flow faster, pushing against the floating ice shelf.

The ice shelf is one of the restraining forces holding the ice sheet back. But pressure from the land ice is slowly breaking this ice plate. Like a board splintering under too much weight, it is developing huge cracks. When it gives way – and mapping of the fractures and speed of flow suggests this is just a few years away – it will be another step that allows the ice to flow faster, feeding the feedback loop.

Up to 10 feet of sea level rise

Looking back at the ice-covered continent from our camp this year, it is a sobering view. A huge glacier, flowing toward the coast, and stretching from horizon to horizon, rises up to the middle of the West Antarctic Ice Sheet. There is a palpable feeling that the ice is bearing down on the coast.

Ice is still ice – it doesn’t move that fast no matter what is driving it; but this giant area called West Antarctica could soon begin a multicentury decline that would add up to 10 feet to sea level. In the process, the rate of sea level rise would increase severalfold, posing large challenges for people with a stake in coastal cities. Which is pretty much all of us.

'The West Antarctic ice sheet was gone in the past': Scientists are spooked about South Pole's stability