Climate science is clear: Floodwaters are a growing risk for many American cities, threatening to displace not only people and housing but also the land-based pollution left behind by earlier industrial activities.

In 2019, researchers at the U.S. Government Accountability Office investigated climate-related risks at the 1,571 most polluted properties in the country, also known as Superfund sites on the federal National Priorities List. They found an alarming 60% were in locations at risk of climate-related events, including wildfires and flooding.

As troubling as those numbers sound, our research shows that that’s just the proverbial tip of the iceberg.

Many times that number of potentially contaminated former industrial sites exist. Most were never documented by government agencies, which began collecting data on industrially contaminated lands only in the 1980s. Today, many of these sites have been redeveloped for other uses such as homes, buildings or parks.

For communities near these sites, the flooding of contaminated land is worrisome because it threatens to compromise common pollution containment methods, such as capping contaminated land with clean soil. It can also transport legacy contaminants into surrounding soils and waterways, putting the health and safety of urban ecosystems and residents at risk. 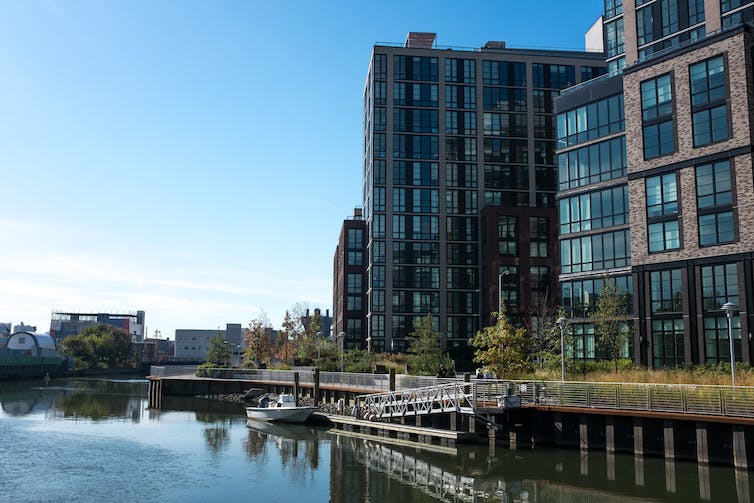 New York developers are planning thousands of housing units along the Gowanus Canal, a notoriously contaminated industrial area and waterway.

We study urban pollution and environmental change. In a recent study, we conducted a comprehensive assessment by combining historical manufacturing directories, which locate the majority of former industrial facilities, with flood risk projections from the First Street Foundation. The projections use climate models and historic data to assess future risk for each property.

The results show that the GAO’s 2019 report vastly underestimated the scale and scope of the risks many communities will face in the decades ahead.

These former industrial sites have been called ghosts of polluters past. While the smokestacks and factories of these relics may no longer be visible, much of their legacy pollution likely remains.

In just these six cities, we found over 6,000 sites at risk of flooding in the next 30 years – far more than recognized by the EPA. Using census data, we estimate that nearly 200,000 residents live on blocks with at least one flood-prone relic industrial site and its legacy contaminants.

Without detailed records, we can’t assess the extent of contamination at each relic site or how that contamination might spread during flooding. But the sheer number of flood-prone sites suggests the U.S. has a widespread problem it will need to solve.

The highest-risk areas tended to be clustered along waterways where industry and worker housing once thrived, areas that often became home to low-income communities.

Legacy of the industrial Northeast

In Providence, an example of an older industrial city, we found thousands of at-risk relic sites scattered along Narragansett Bay and the floodplains of the Providence and Woonasquatucket Rivers.

Over the decades, as these factories manufactured textiles, machine tools, jewelry and other products, they released untold quantities of environmentally persistent contaminants, including heavy metals like lead and cadmium and volatile organic chemicals, into the surrounding soils and water. 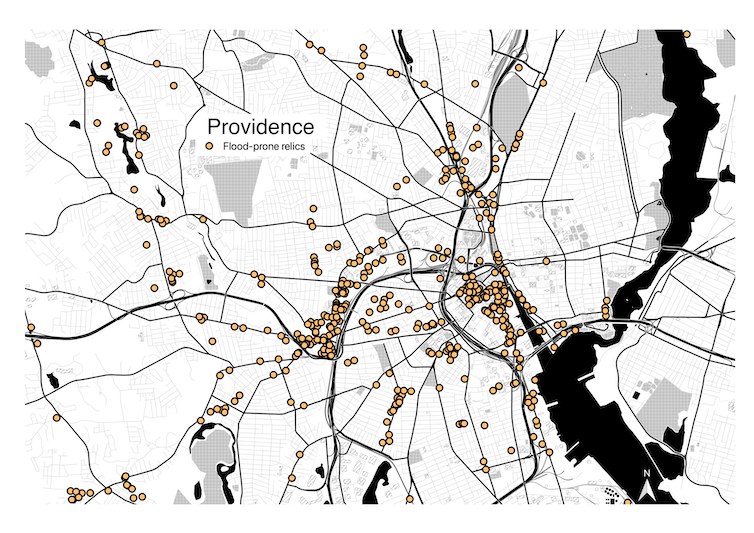 For example, the Rhode Island Department of Health recently reported widespread drinking water contamination from PFAS, often referred to as “forever chemicals,” which are used to create stain- and water-resistant products and can be toxic.

The tendency for older factories to locate close to the water, where they would have easy access to power and transportation, puts these sites at risk today from extreme storms and sea-level rise. Many of these were small factories easily overlooked by regulators.

Newer cities, like Houston, are also vulnerable. Houston faces especially high risks given the scale of nearby oil, gas and chemical manufacturing infrastructure and its lack of formal zoning regulations.

In August 2017, historic rains from Hurricane Harvey triggered more than 100 industrial spills in the greater Houston area, releasing more than a half-billion gallons of hazardous chemicals and wastewater into the local environment, including well-known carcinogens such as dioxin, ethylene and PCBs. 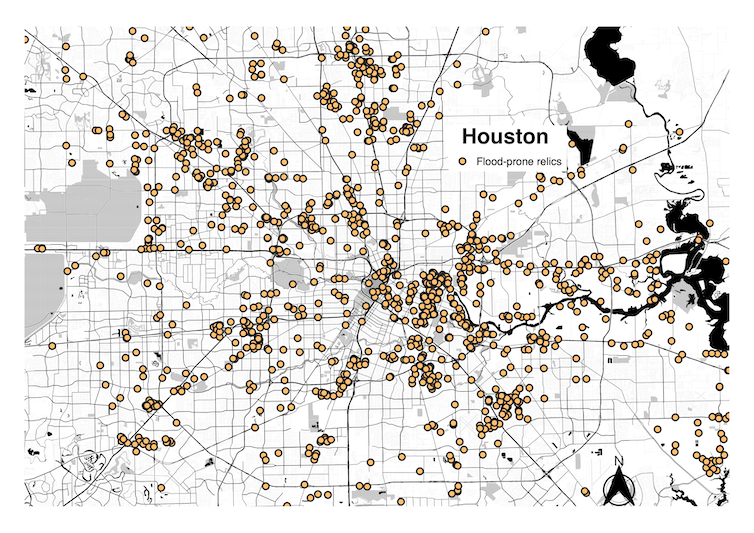 Even that event doesn’t reflect the full extent of the industrially polluted lands at growing risk of flooding throughout the city. We found nearly 2,000 relic industrial sites at an elevated risk of flooding in the Houston area; the GAO report raised concerns about only 15.

Many of these properties are concentrated in or near communities of color. In all six cities in our study, we found that the strongest predictor of a neighborhood containing a flood-prone site of former hazardous industry is the proportion of nonwhite and non-English-speaking residents.

As temperatures rise, air can hold more moisture, leading to strong downpours. Those downpours can trigger flooding, particularly in paved urban areas with less open ground for the water to sink in. Climate change also contributes to sea-level rise, as coastal communities like Annapolis, Maryland, and Miami are discovering with increasing days of high-tide flooding.

Keeping communities safe in a changing climate will mean cleaning up flood-prone industrial relic sites. In some cases, companies can be held financially responsible for the cleanup, but often, the costs fall to taxpayers.

The infrastructure bill that Congress passed in 2021 includes $21 billion for environmental remediation. As a key element of new “green” infrastructure, some of that money could be channeled into flood-prone areas or invested in developing pollution remediation techniques that do not fail when flooded. 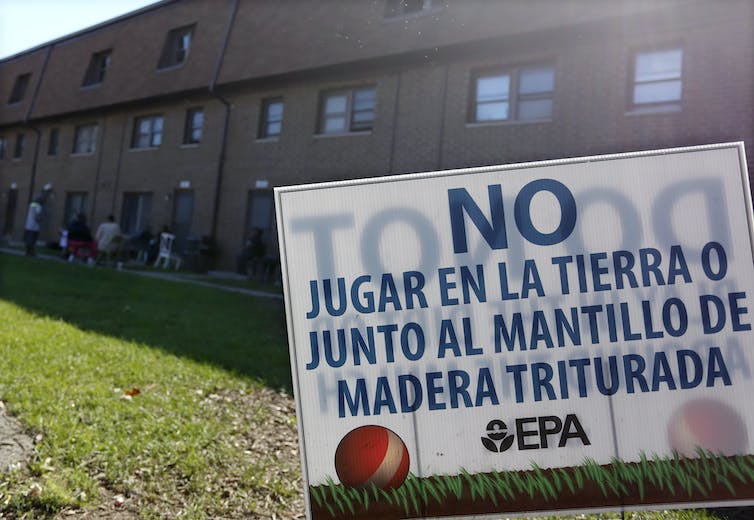 The West Calumet Housing Complex in East Chicago, Ind., was built on the site of an old lead refinery. It was closed down after children there were found to have elevated levels of lead in their blood. The sign reads: ‘Do not play in the dirt or next to shredded wood mulch.’

Our findings suggest the entire process for prioritizing and cleaning up relic sites needs to be reconsidered to incorporate future flood risk.

Flood and pollution risks are not separate problems. Dealing with them effectively requires deepening relationships with local residents who bear disproportionate risks. If communities are involved from the beginning, the benefits of green redevelopment and mitigation efforts can extend to a much larger population.

One approach suggested by our work is to move beyond individual properties as the basis of environmental hazard and risk assessment and concentrate on affected ecosystems.

Focusing on individual sites misses the historical and geographical scale of industrial pollution. Concentrating remediation on meaningful ecological units, such as watersheds, can create healthier environments with fewer risks when the land floods.