The long history of weaponizing the federal government

Now that House Republicans have created a “Select Subcommittee on Weaponization of the Federal Government,” let’s revisit a classic of that power-abusing genre, featuring its greatest star, Richard M. Nixon.

The subcommittee’s express purpose is investigating federal investigators for alleged “illegal or improper, unconstitutional, or unethical activities,” at which Nixon was an acknowledged master. I’ve been listening to Nixon abuse power on the secret White House tapes for two decades with the University of Virginia’s Miller Center. I’ve written about his decisions to sabotage Vietnam peace talks to damage the Democrats’ 1968 presidential campaign, to time his withdrawal from Vietnam to help his 1972 reelection campaign, and to spring former Teamsters president Jimmy Hoffa from prison in return for the union’s political support.

This story is a forgotten sequel to the Watergate break-in. No one has ever proved that President Nixon ordered burglars to photograph documents and plant listening devices at the headquarters of the Democratic National Committee, known as the DNC.

But Nixon himself created proof that he abused his presidential authority to go after the DNC with the investigative powers of the Internal Revenue Service. He captured this high crime on tape less than two months after the Watergate burglars’ arrests.

“Are we looking over the financial contributors of the Democratic National Committee?” Nixon asked his chief of staff on Aug. 3, 1972. “Are we running their income tax returns? Or is the Justice Department checking to see whether or not there’s any antitrust suits? Do we have anything going on any of these things?”

“We have all this power and we aren’t using it. Now, what the Christ is the matter?” Nixon asked. 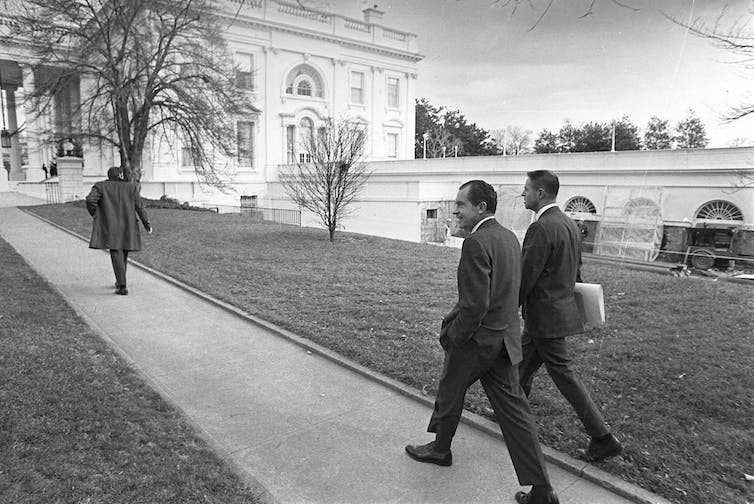 President Richard Nixon walks with his assistant H.R. Haldeman from the Executive Office Building to the White House for a Cabinet meeting in December 1969.

“We’ve got a guy who’s a pluperfect bastard. He’s a loyalist – he’s a fanatic loyalist – in the IRS,” said John D. Ehrlichman, whose title was assistant to the president for domestic affairs and whose job was henchman.

“He’s our guy,” Ehrlichman said. “One Treasury secretary after another, starting with [David M.] Kennedy, [John B.] Connally, now [George P.] Shultz, has said, ‘Oh, Jesus, can’t you get this guy out of there? Can’t you just take him out? He’s making all kinds of trouble for us. He’s too partisan.’”

The president’s mood darkened. “Shultz is not long for this life, in my opinion, because he’s not being political enough,” Nixon said. “I don’t care how nice a guy is. I don’t care how good an economist he is. We can’t have this bullshit.” His frustration was growing. “Can’t we investigate people?” Nixon asked. “Is there anything we can do?”

“I would think that we could get some people with some guts in the second term, when we don’t care about repercussions,” Haldeman said.

Nixon wanted to do something immediately about the chairman of the Democratic National Committee, Larry O’Brien. O'Brien directed John F. Kennedy’s victorious presidential campaign in 1960 and Lyndon B. Johnson’s in 1964. “If you could dirty up O’Brien now, I think it might be a lot better than to wait until later,” Nixon said. 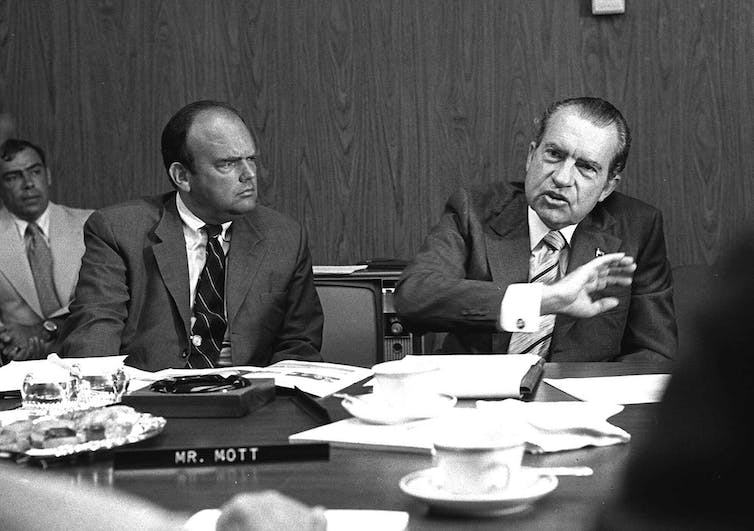 President Nixon, right, at a meeting with aide John D. Ehrlichman in 1972.

Under pressure from the White House, the IRS subjected O’Brien to an audit during the 1972 presidential campaign. The audit found a “relatively small deficiency,” which O’Brien promptly paid. Treasury Secretary Shultz and IRS Commissioner Johnnie Walters told Ehrlichman there was nothing more they could do.

“I wanted them to turn up something and send him to jail before the election,” Ehrlichman later said. There are few purer expressions of authoritarianism than an attempt to jail the titular head of the opposition party during a campaign.

Shortly before Nixon resigned in 1974, the House Judiciary Committee cited his abuse of his power over the IRS in an article of impeachment.

In 1998, Congress made it a felony for a president to “request, directly or indirectly,” an IRS audit or investigation.

None of that stopped President Donald Trump from requesting IRS audits, according to his own former White House chief of staff, John Kelly.

“I would say, ‘It’s inappropriate, it’s illegal, it’s against their integrity, and the IRS knows what it’s doing, and it’s not a good idea,’” Kelly told The New York Times in November 2022. 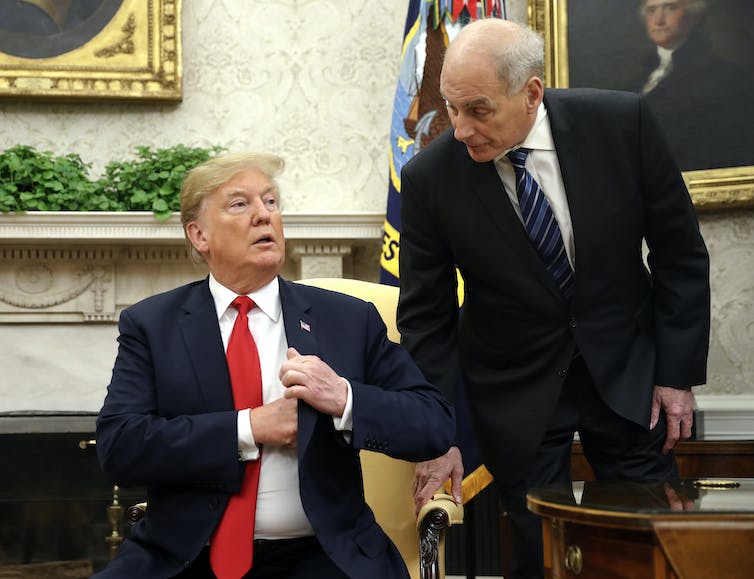 After Kelly left the White House, both Comey and McCabe were subjected to unusually intense IRS audits, the kind tax lawyers refer to as “an autopsy without the benefit of death,” New York Times reporter Michael S. Schmidt wrote. Through a spokeswoman, Trump denied any knowledge of the audits. A Trump spokeswoman also denied Kelly’s account.

If Kelly told the truth, then Donald Trump managed to weaponize the IRS more effectively than Richard Nixon. That’s a sentence that I, as the author of twobooks on Nixon’s worst abuses of power, found difficult to type.

Kelly has made exactly the kind of credible allegation that a “Select Subcommittee on Weaponization of the Federal Government” worthy of the name would investigate. Yet none of the Republicans who spoke before their party-line vote to establish the subcommittee expressed any interest in investigating government weaponization by politicians of their own party.

Congress has the power, even the obligation, to unearth and eliminate government weaponization. But if the subcommittee abuses its power for partisan ends, it will merely be an example of the problem it’s supposed to solve.

Once, not so long ago, congressional Republicans were impeachment’s constitutional stalwarts.

How Trump's bad Nixon imitation may cost him the presidency

Whatever Donald Trump does, Richard Nixon usually did it first and better.

The long history of weaponizing the federal government

How Trump's bad Nixon imitation may cost him the presidency