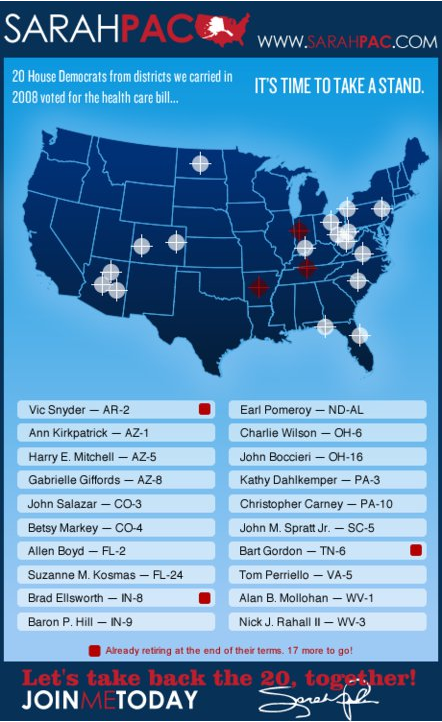 The ad from Sarah Palin’s PAC that prompted the New York Times (6/14/17) to write that in Rep. Gabrielle Giffords’ 2011 shooting, “the link to political incitement was clear.”

Sarah Palin, the former Alaska governor and 2008 vice presidential candidate who helped propel the right flank of the Republican Party into its current prominence, came to New York City with a defamation lawsuit against the New York Times. She lost in court, but her offensive against the paper is a symptom of a growing political campaign against a crucial legal centerpiece of US press freedom.

A Times editorial (6/14/17) used an ad from Palin’s political action committee that placed crosshairs over congressional districts as an example of partisan speech run amok, suggesting it had a connection to a 2011 shooting that maimed Rep. Gabby Giffords and left six others dead. The original text read:

In 2011, when Jared Lee Loughner opened fire in a supermarket parking lot, grievously wounding Representative Gabby Giffords and killing six people, including a 9-year-old girl, the link to political incitement was clear. Before the shooting, Sarah Palin’s political action committee circulated a map of targeted electoral districts that put Ms. Giffords and 19 other Democrats under stylized crosshairs.

The paper later issued a correction (6/16/17), saying that the editorial “incorrectly stated that a link existed between political rhetoric” and the shooting of Giffords, when “no such link was established.” A revised text replaced “the link to political incitement was clear” with “At the time, we and others were sharply critical of the heated political rhetoric on the right,” and added: “But in that case no connection to the shooting was ever established.”

Palin said in court that the mistake caused her lasting damage (NPR, 2/10/22): “It’s hard to lay your head on a pillow and have a restful night when you know that lies are told about you, a specific lie that was not going to be fixed.”

The jury rejected her defamation claim, bringing the Times a legal victory against the former governor (CNN, 2/15/22). The jury’s role in the case, it turned out, was merely symbolic. Judge Jed Rakoff declared as the jury deliberated that he would dismiss the case regardless of what they decided, because Palin “failed to show the Times acted with ‘actual malice.’” And that, according to the precedent set in the 1964 Supreme Court decision New York Times v. Sullivan, is “the standard in lawsuits involving public figures” (Reuters, 2/14/22). (The “actual malice” standard requires public figures suing for libel to prove that falsehoods were made either intentionally or with “reckless disregard” for the truth.)

James Bennet, the editorial page editor at the Times at the time, took full responsibility for associating Palin’s ad with the Giffords shooting (New York Post, 2/8/22). The paper admitted that it made an error and issued a correction promptly (NPR, 2/12/22). Even looking at the editorial’s original form, however, it’s hard to prove that a vague word like “link” is factually false; it never came out and said that Giffords’ shooting was caused by Palin’s ad—a point Bennet made at trial: “If I thought it caused the violence, I would have used the word ‘cause,’” he said (Reuters, 2/9/22). It’s unsurprising that the jury found for the Times, even without the “actual malice” standard that public figures have to meet when suing for libel. 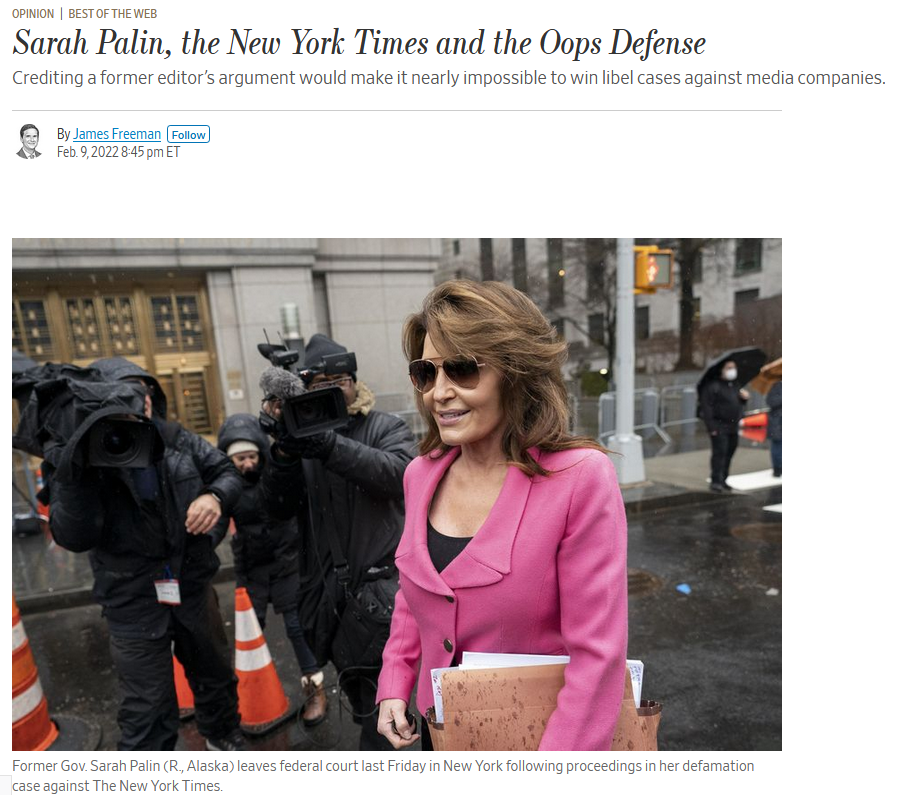 The Wall Street Journal s James Freeman (2/9/22) would like to make it easier for politicians to sue journalists because the New York Times “continues to mention Ms. Palin in a negative light.”

But that protection for the press, once seen as a necessary shield to protect independent speech from powerful figures who could otherwise use legal might to crush dissent, is being turned into the bad guy in this case, less a shield than a weapon that the establishment press can use against anyone in the public eye that it wants to tar publicly.

Palin, a former governor and vice presidential candidate as well as a powerful icon in conservative movement, presented herself as a David to the Times’ Goliath (New York Times, 2/10/22). Her lawyer, Shane Vogt, asserted that Palin’s team was “keenly aware of the fact that we’re fighting an uphill battle” (Politico, 2/3/22). The Wall Street Journal’s James Freeman (2/9/22) said that “Bennet is arguing that he didn’t mean to write what he clearly wrote,” and that if his “argument is credited, media outfits can publish almost anything and then run corrections while claiming they meant no harm.”

For many observers, these were crocodile tears and part of a public campaign to discredit the media and paint conservatives as victims of an unaccountable newspaper. Politico (2/10/22) said that Palin “knows the whole episode has enhanced, not damaged, her reputation with the partisans on whom her political and financial fortunes depend.” Her target is “the news organization her confederates on the right have seethed over since the Nixon era,” and others are “cheering her case” because they “hope to weaken the legal protections benefiting all journalists.” 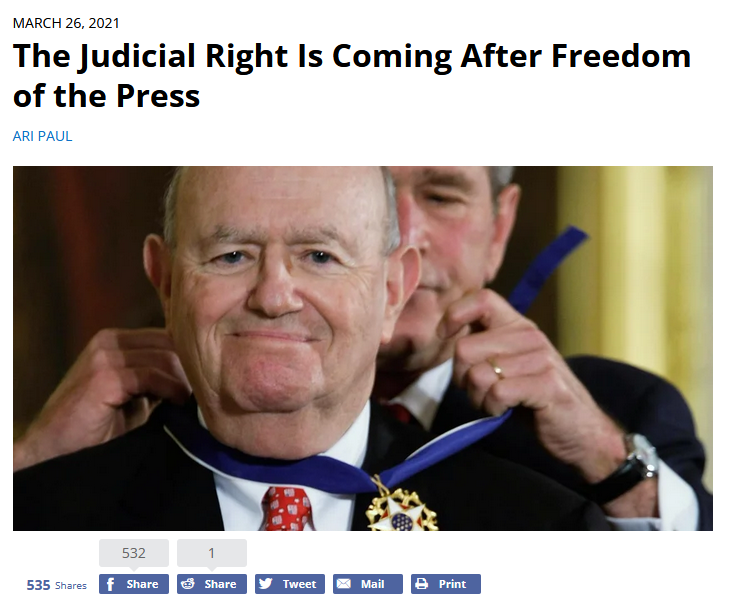 FAIR.org (3/26/21): Right-wing judicial activism “has breathed new legal life into the prospect of making it easier for political and corporate leaders to use defamation suits to stifle the press.”

That last part is critical. Protections like those afforded under Sullivan have been considered sacrosanct by press and free speech advocates. When then-President Donald Trump vowed to make it easier for him to sue journalists, the press scoffed (CNBC, 1/10/18; LA Times, 9/8/18). But the Palin case is a reminder that this threat was not the random musing of a thin-skinned demagogue, but an idea gaining steam on the broader right.

Almost a full year ago, FAIR (3/26/21) pointed to a dissent written by circuit court judge, long-time conservative legal operative Laurence Silberman, which called the Sullivan standard a “constitutional Brezhnev doctrine” to defend the liberal press against the right. And that was just the tip of the iceberg: At least two Supreme Court justices have wanted to revisit the Sullivan standard, and legal scholar Richard Epstein has railed against it since the 1980s.

This has intensified. The Reporters Committee for the Freedom of the Press (1/18/22) said that at the beginning of this year, the Supreme Court “called for a response to yet another petition asking it to overturn its decision” in Sullivan. Last year, Justice Neil Gorsuch cited “‘momentous changes in the nation’s media landscape since 1964’ as his reason to revisit Sullivan.”

The committee also noted that “Justice Clarence Thomas pointed to the ease with which the ‘Pizzagate’ conspiracy theory spread online”—an odd argument for Thomas to make, given the fervent advocacy of his wife, right-wing activist Gini Thomas, on behalf of the conspiracy theory that the 2020 election was stolen from Donald Trump (New York Times Magazine, 2/22/22). 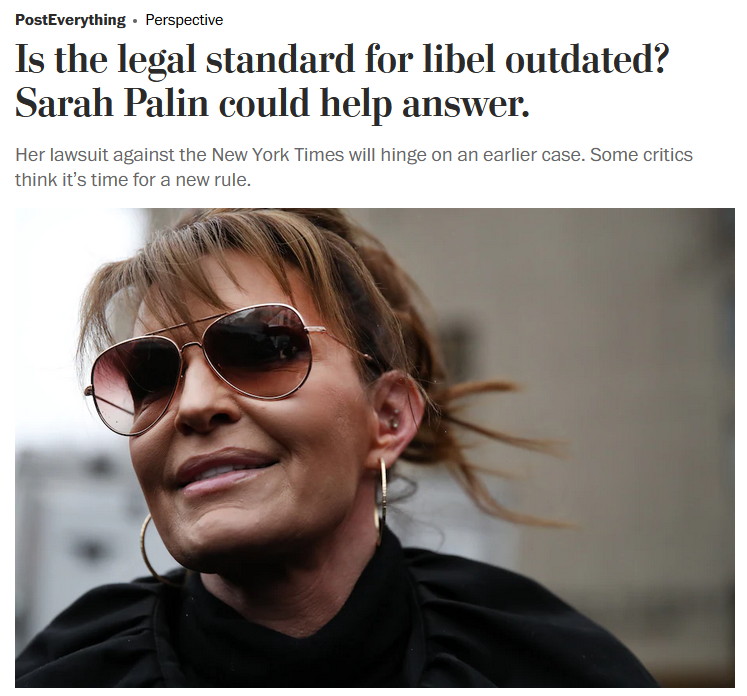 Genevieve Lakier (Washington Post, 2/3/22) suggests making it difficult for public figures to sue “might have made sense” when it protected “large media organizations,” but it “makes no sense today, when anyone can spread misinformation so long as they have social media followers.”

University of Chicago law professor Genevieve Lakier (Washington Post, 2/3/22) cited these critiques of the “actual malice” standards. She noted that while Sullivan is “an emblem of American free-speech exceptionalism and a source of pride,” it is also “an accident of history”—one that “removes any legal incentive for those who write about public officials or public figures to vigorously fact-check their stories.”

The United States, Lakier said, should “not let Sullivan limit our imagination of how First Amendment law could better serve the public interest in a vastly different media environment” from 1964, when the decision was handed down. (Her “most obvious” suggestion as a replacement for Sullivan are “damage caps”—which would allow lawsuits by public figures to be a manageable expense for outlets with deep pockets, while making them potentially catastrophic to independent journalists.)

With breaking news being delivered in a tweet, it is easier now more than ever for journalists to simply get it wrong. This raises two questions: (1) Should there be a more relaxed standard for public officials rather than actual malice, and (2) would doing so create a chilling effect? These questions may soon have answers if courts do what Justice Thomas urges, which is reconsideration of jurisprudence in this area.
In the end, Justice Thomas seems to go a step further than just arguing for a more relaxed standard; relying on common law, he deems libel against public figures, “if anything, more serious and injurious than ordinary libels.” His concurrence provides momentum for critics of [Sullivan] and room for courts to reexamine the standard, as the press continues to face increased scrutiny.

Noah Feldman said at Bloomberg (7/7/21) that, according to Gorsuch, “the Sullivan precedent creates a perverse incentive not to check facts—so that you can later say that you didn’t realize what you were saying was false,” and that therefore, “the Sullivan rule no longer serves its original objective of creating an informed public debate.” (Gorsuch is describing here what’s known legally as “reckless disregard”—precisely what is not protected by the Sullivan standard.)

Press advocates believe that false statements against a public figure come with the cost of celebrity, Feldman argued, but “it has become harder for such stories to be shunted aside.” For “non-celebrities who might still be deemed public figures,” the actual malice standard “makes it very hard for them to vindicate their concerns about their own reputation.” Feldman warned press advocates to brace themselves for this precedent to be revisited.

Public trust in media has fallen, although that trend is highly partisan. Gallup (10/7/21) noted that “68% of Democrats, 11% of Republicans and 31% of independents…trust the media a great deal or fair amount,” while “confidence in the media among Republicans over the past five years is at unprecedented lows.” Palin’s unsuccessful legal challenge against the Times will only solidify that skepticism among her political base, boosting the narrative that conservatives can be vilified in the court of opinion with no recourse in a court of law.

The consequences of that skepticism go beyond drops in subscriptions and the rise of more partisan, start-up media outlets. It is about building a political and legal case that media outlets enjoy too much free speech, and that a conservative Supreme Court should undo a precedent by the Warren court, the most liberal era of the high court’s history. Such a change could have an enormous stifling effect on the press—establishment and otherwise.