Joe Rogan, screengrab
Here's the real reason grifters are pushing a dodgy 'cure' for Covid — instead of the vaccines
Ari Paul
and
FAIR
February 14, 2022 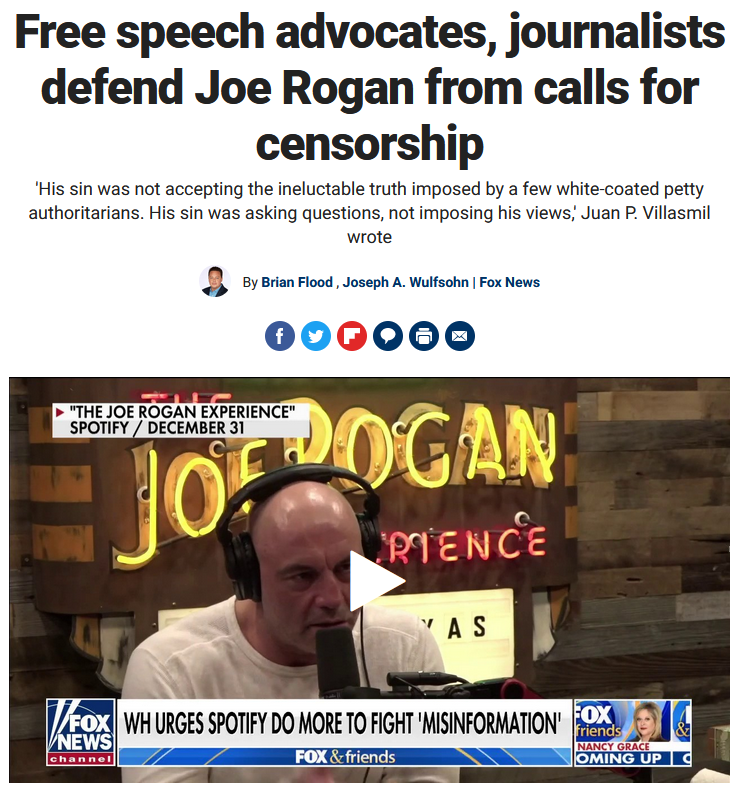 Musician Neil Young had given the streaming service Spotify, which paid a reported $100 million for exclusive rights to Rogan’s show, an ultimatum: either cut Rogan and his constant misinformation about Covid-19, or lose Young’s music. Spotify—a corporate media service that has been accused of exploiting musicians financially (Guardian, 7/29/13)―chose Rogan.

Contrary to his media defenders, Rogan has not been threatened with censorship. His free speech rights were never in any kind of jeopardy. Young has not crossed into some kind of pro-deep state censorship mode; rather, he left Spotify because he disagreed with its policies, taking his business elsewhere because he has the right to do that.

Both Rogan and Spotify have responded to the outrage, as “Rogan apologized…for his use of a racial slur in past episodes,” and the streaming service removed dozens of his show’s episodes (New York Times, 2/5/22). Such pressure against right-wing, corporate media shock jocks has yielded results in the past: CBS fired Don Imus due to a public backlash against racist and sexist comments he made about the Rutgers women’s basketball team (CBS, 4/12/07; Extra!, 5–6/07). Sometimes it doesn’t, as two dozen advertisers left Tucker Carlson’s Fox News show after he made anti-immigrant comments (Hollywood Reporter, 12/17/18), and he still enjoys top ratings (AdWeek, 1/3/22).

Artists and media consumers free to engage in media activism like leaving a streaming service (a form of voting with one’s dollars and property, supposedly a democratic feature of the free market) or protesting a media company over its content. But these articles imply that the mere discussion of Rogan’s ability to spread misinformation about Covid is an affront to his constitutional right to yell “fire” in a crowded theater. Fox News (2/3/22) paraphrased former Mumford & Sons banjo player Winston Marshall saying that “the state of music censorship in the Soviet Union in 1984” was comparable “to the conditions that Spotify is facing today as calls for it to pull Rogan’s work mount.” 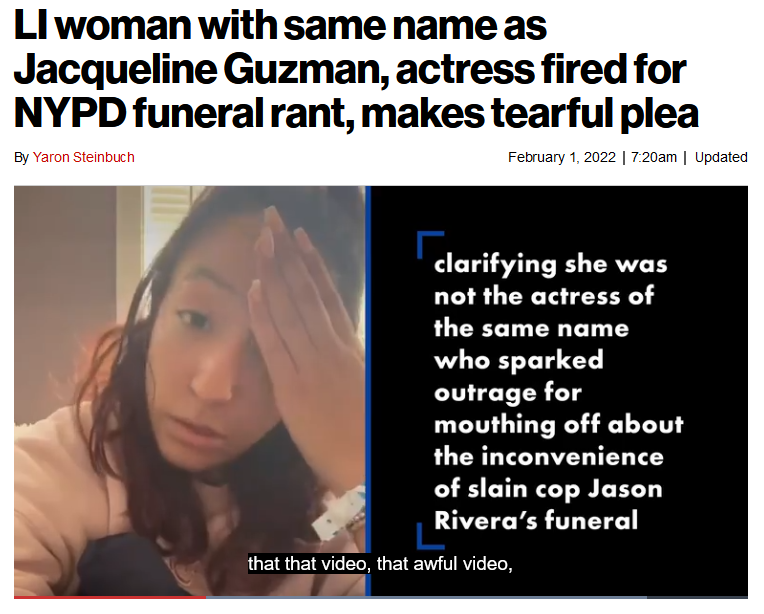 The New York Post (2/1/22) expressed no sympathy for a woman fired for criticizing police–she was “widely condemned for her shameful online rant”–but does feel bad for someone with the same name who was mistakenly subjected to abuse.

Meanwhile, regular, everyday workers live with limits to their “work mount” and their free speech rights because they are at-will employees. And unlike Rogan, who still has the support of Spotify’s boss (New York Post, 2/7/22), these workers are treated as disposable.

Related to the public funeral of one of these slain NYPD cops, a New York City “actress was fired this weekend after backlash over her viral TikTok complaint that the city didn’t need to be shut down for ‘one f—— cop’” (Fox News, 1/30/22). And someone who shares her name with that actor says she has “been harassed and threatened by people confusing her with the woman who made the vile rant” (New York Post, 2/1/22).

In Tennessee, Starbucks fired unionizing employees who had “allowed members of the media into the store as part of the public launch of their unionization effort” (CNN, 2/8/22). For unionists, these terminations aren’t just an immoral violation of labor rights, but an affront to the First Amendment freedom of assembly and, in this case, these workers’ right to publicize their organizing against an enormous and well-known company in the free press.

These are examples of the real predations on free speech in this country, and yet instances like these don’t seem to elicit the same hand-wringing about censorship from right-wing media. 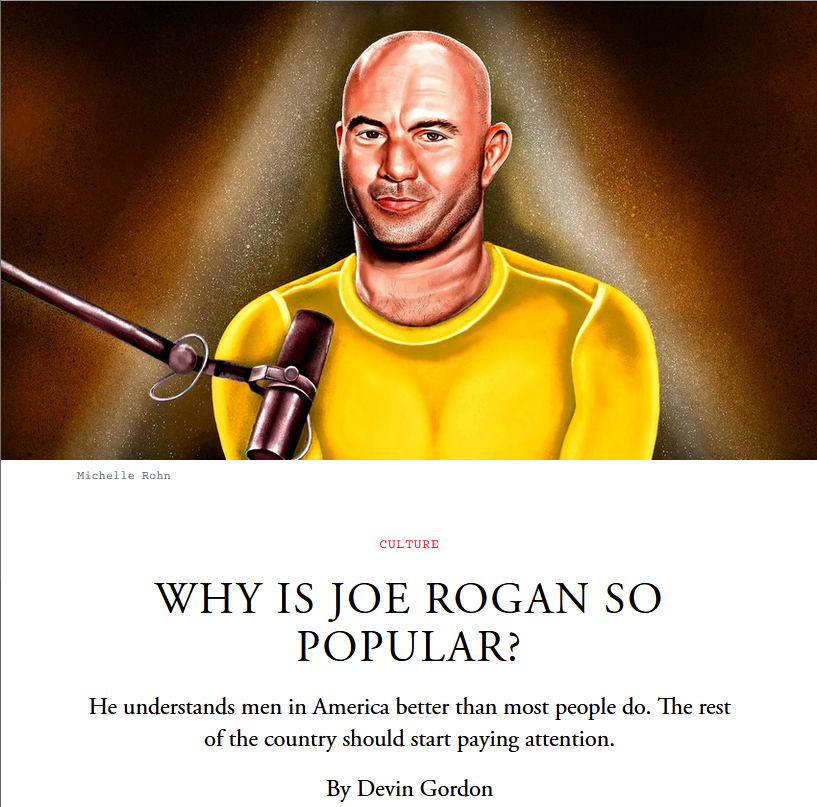 Devin Gordon (Atlantic, 8/19/19): “If you look past the jokes themselves and focus on the targets he’s choosing, the same patterns emerge. Hillary, the #MeToo movement, why it sucks that he can’t call things ‘gay,’ vegan bullies, sexism.”

Rogan has been immune to this kind of pressure, largely because his controversial statements are exactly what makes his media brand sellable; the Atlantic (8/19/19) said in 2019 that his show has “been the No. 2 most-downloaded podcast on iTunes for two years running,” and “his YouTube channel…has 6 million subscribers.” LGBTQ groups like GLAAD (Twitter, 7/22/20) have criticized the host for promoting anti-trans viewpoints, but Rogan is protected from his critics because by all metrics, he’s a benefit for the corporate services like YouTube: The Hill (2/1/22) argues that with 11 million listeners, “Rogan’s popularity is precisely due to the fact that he is uncensored in what he says.”

That is a very different story for the 99 Percent, who can become victims of a very real cancel culture, because things like being critical of the police at the wrong time can be seen as beyond the bounds of free discourse. Corporate media haven’t focused on them as victims; in fact, the tabloids and Murdoch-owned media have painted them as extremists who got what was coming to them.

And libertarians haven’t made them a cause, either. That’s because these pieces that treat Rogan as a free speech warrior aren’t honest. Their defense of Rogan, who said he would vote for Donald Trump in the last election (Guardian, 4/20/20), is not about the sacredness of free speech; while he is facing a lot of public criticism, he is not being regulated or stifled as a result. In fact, these articles celebrate the degree to which protests by musicians haven’t actually silenced him, an admission that his speech was never really under threat.

These pieces, instead, are a political defense of Covid-19 misinformation and bro jock racism. Robust public health measures to control the pandemic are seen by the right as left-wing government overreach, and therefore someone who criticizes them, however inaccurately, is on their team.

The Rogan affair is a spectacle by right-wing media to paint an advocate for a right-wing political cause as a victim. Meanwhile, right-wing tabloid vitriol has celebrated the punishment of speech by regular working people.