Photo by Tomáš Malík on Unsplash
Mt. Fuji landamrk
The Conversation
January 27, 2022 Bank
We have been living in a COVID-19 pandemic world for two years – and almost everything about our lives has been affected. Travel and holidays in particular have been constrained through border closures and lockdowns. It’s too early to say what effect this may have on overseas travel long term. But one form of travel that is forecast to grow in popularity is pilgrimage.

Often described as “a journey with a purpose or a journey with an intention”, a pilgrimage is different from a plain old walk or hike as it tends to be about following a particular path with religious, spiritual or historical significance.

Pilgrimages are a way of finding spiritual solace and a chance to connect with the great outdoors. Indeed, since the pandemic began, many of us have spent more time close to mountains, rivers, waterfalls and parks, for psychological recovery, spiritual recharge, and as a form of meaningful travel.

New and repurposed pilgrimages have also emerged in many destinations including Scotland, India, Japan, England and Italy. While some routes have historical origins, others are modern, newly developed or resignified – such as the Ancient Connections project linking St David’s, Pembrokeshire, in Wales to Ferns, County Wexford, in Ireland. The project aims to revive and celebrate the medieval connections between the two Celtic lands.

Pilgrims walk these trails for different reasons. For some, the experience has religious significance, but for others, it’s about finding some quality time to think, breathe, heal and discover oneself, during a a simple walk.

The restrictions imposed on religious sites during the earlier phase of the pandemic did little to curb pilgrims’ enthusiasm. Indeed, increasing numbers of South Koreans have walked the Camino de Santiago in northern Spain. Meanwhile, alternative ways of meeting pilgrims’ needs have also emerged, including the virtual pilgrimage.

Fitness apps and virtual guided tours of the Camino have been popular. The Church in Wales also created an online pilgrimage route where e-pilgrims could explore some of Wales’ historic churches, while Japan’s Shikoku pilgrimage started offering real-time online pilgrimages for those unable to participate in a physical pilgrimage. 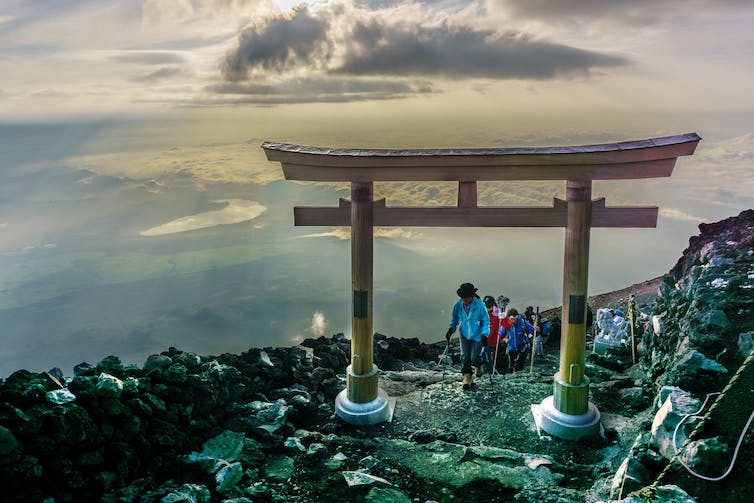 Torii on top of Fuji mountain. Fuji is the highest mountain in Japan at 3,776m, and a symbol of Japan.

Some of the pilgrimage routes also provide distinctive cultural experiences such as Japanese traditional cooking and art and craft classes, or Welsh tea and cakes. The new Michinoku (the ancient name of Tohoku) coastal trail in Japan, for example, has already spurred interest from national and international travellers, and it is expected to become an iconic hiking route, while it is hoped that the new Wales-Ireland pilgrimage walking route will help to boost local economies – and is forecast to attract around 5,000 people a year.

Of course, maintaining pilgrimage sites and routes is crucial for cultural heritage and protection. This also has the potential to create new livelihoods and bring much-needed tourism to rural or remote areas. In central India, for example, a Buddhist pilgrimage site in Nagarjuna is being developed as part of an effort to revitalise Buddhist heritage in the region.

In Bhutan, a sacred hiking trail, that fell into disrepair because of highway construction, is reopening after 60 years with trail tourism programmes packaged to support local homestays, guesthouses and hotels. In the 16th century, the trail – which follows the route along the ancient Silk Road – was the only way of getting between the east and west of the country. And it served as the pilgrimage route for Buddhists in the east to travel to sacred sites in western Bhutan and Tibet.

As mental health issues have come to the fore during the pandemic, walking – with its proven psychological and therapeutic benefits – has been a popular activity for many as a way of coping with stress and anxiety. And during pilgrimage walks, people often observe and appreciate simple things more keenly, feel the spiritual connection with their surroundings and gain new, enriching life perspectives.

So if you’re keen to get your walking boots on, for those based in the UK, there is an array of new pilgrimage routes to explore. Many of these were established during the pandemic such as the Northern Saints Trails in the north-east of England, the Walsingham Way in East Anglia, St Patrick’s Way in Northern Ireland, the Kentigern Way in Scotland, and the Way of St Hild in Teesside. While the Devon Pilgrim, part of the Growing the Rural Church project, which aims to connect rural churches with local communities and landscapes, launched no fewer than three new pilgrimage walks in the summer of 2021. 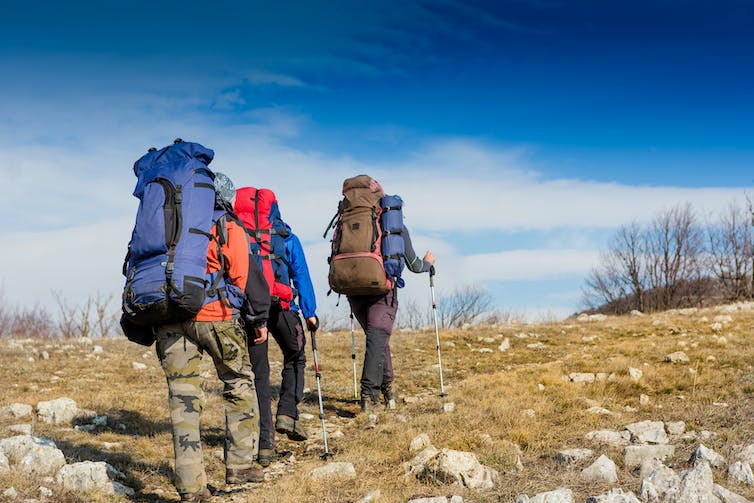 Enjoy the great outdoors with purpose.

The Church of England promotes many Christian-themed pilgrimages, and information about some of these can be found on the Centre for Christian Pilgrimage website. Organisations such as the British Pilgrimage Trust and the Scottish Pilgrims Ways Forum also offer guided pilgrimages and advice on self-guided walks.

Pilgrimages, however, need not necessarily entail long hikes. Micro pilgrimages and visits to pilgrimage places are also a great way to find some time for quiet contemplation. And for those looking for a relatively stress-free experience, there is, of course, always the option of virtual pilgrimage allowing you to travel the world from the comfort of home.