Bible study image viaShutterstock.
Captive virgins, polygamy, sex slaves: What marriage would look like if we actually followed the Bible
The Conversation
January 02, 2022
From the beginning of the COVID-19 pandemic, the Church of Jesus Christ of Latter-day Saints, commonly known as the Mormon church or LDS church, followed government guidelines to protect members of their religious community. On March 25, 2020, the church closed its temples and encouraged members to wear masks. Leaders praised vaccination, which church President Russell M. Nelson, a retired surgeon, called a “literal godsend.” He and other senior members received vaccinations, calling on church members to follow their example.

Fundamentalist branches of Mormonism, however – groups who began separating from the LDS church after it ended the institutionally sanctioned practice of polygamy in 1904 – took a different route. Many fundamentalists have refused to take the vaccine and have sought alternative therapies, including the controversial use of Ivermectin, a drug commonly prescribed to treat intestinal parasites.

Nationwide, about 30% of Americans have not received any vaccine dose against COVID-19. Many express skepticism about government intervention in their families’ health, opinions that are sometimes rooted in misinformation or conspiracy theories.

Wariness toward government and medical authorities can run especially deep in isolated or marginalized communities. As a scholar of Mormon fundamentalism, I’ve seen how, for fundamentalists, such fears are rooted in distrust. From the founding of the LDS church in 1830, its members often faced discrimination and persecution, but conflict decreased significantly after the end of institutionally sanctioned polygamous marriages. Fundamentalist groups, on the other hand, still view the government with suspicion. Many continue polygamy, and fear of being reported to law enforcement keeps them from accessing resources like health care.

Joseph Smith, the founder of the LDS church, taught that God has a body and that people’s own bodies are sacred gifts to help them reach eternity.

Given the religious importance of human bodies, his followers believed they required great care – and many 19th-century church members were suspicious of medical authorities, amid rising anti-Mormon sentiment. During the Mexican-American War of 1846-1848, for example, George B. Sanderson was appointed medical officer for the Mormon Battalion, a unit recruited from the Utah Territory. He frequently prescribed mercury chloride and arsenic, which were standard treatments at the time, but caused contention among the troops. Distrustful soldiers questioned whether he was poisoning them and remembered him as “Dr. Death.”

Early LDS leaders warned against “poisonous medicines.” Brigham Young, the church’s second president, counseled his community in alternative therapies to keep them away from medical professionals they did not trust.

An often-quoted adage – popularly attributed to Young – is that Latter-day Saints should have knowledge of several herbs “to withstand the scourges of the last days.” Comfrey in particular became a catch-all treatment and remains a staple in fundamentalist homes wary of medical professionals.

After the turn of the 20th century, when the LDS church began supporting legal prosecution of polygamy and excommunicating members who practiced it, fundamentalist groups became even more isolated and continued to rely on home remedies. During the Cold War, former members of one group recall, their late leader instructed followers that a bitter concoction called “green drink” could preserve the bodies of the most righteous from nuclear fallout. 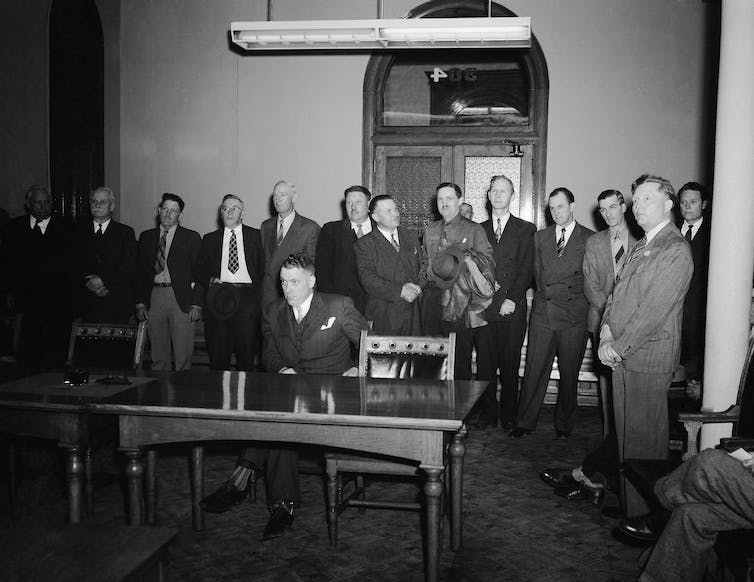 Men being tried for unlawful cohabitation stand in a courtroom in Salt Lake City in 1945. Tensions with the government over polygamy still influence fundamentalist groups’ distrust toward officials today.

In my own research within these fundamentalist communities, I’ve seen the use of comfrey firsthand – and even had it prescribed to me for colds.

In 2018, I was doing fieldwork in a rural polygamous community in Nevada during a whooping cough outbreak. Many members deemed vaccines dangerous and were reluctant to enter hospitals for fear of being reported to authorities. At the instruction of their leader, an alternative health practitioner who was esteemed as a prophet, women took to their kitchens and prepared a bitter drink called “anti-plague,” a dark brown liquid made primarily of comfrey.

When people from polygamous communities explain the barriers they face because of their chosen lifestyle, access to medical care for their children is a central concern. This became a central point of debate during the legislative hearings for SB102, a bill signed into law in 2020 that effectively decriminalized polygamy in Utah after years of debate. The new law lowers polygamy to an infraction, rather than a felony, unless connected to other crimes such as abuse.

Since the bill passed there has been significant growth in the number of families seeking community and government resources. In 2019, for example, one nonprofit working with polygamist families reported that 800 victims of crime received assistance, including mental health services and legal support. By the end of 2020, that number had increased to 1,098.

Researchers will be watching closely to see how decriminalization affects fundamentalist communities’ health.