Here's the big failure in the fight to vaccinate the U.S. 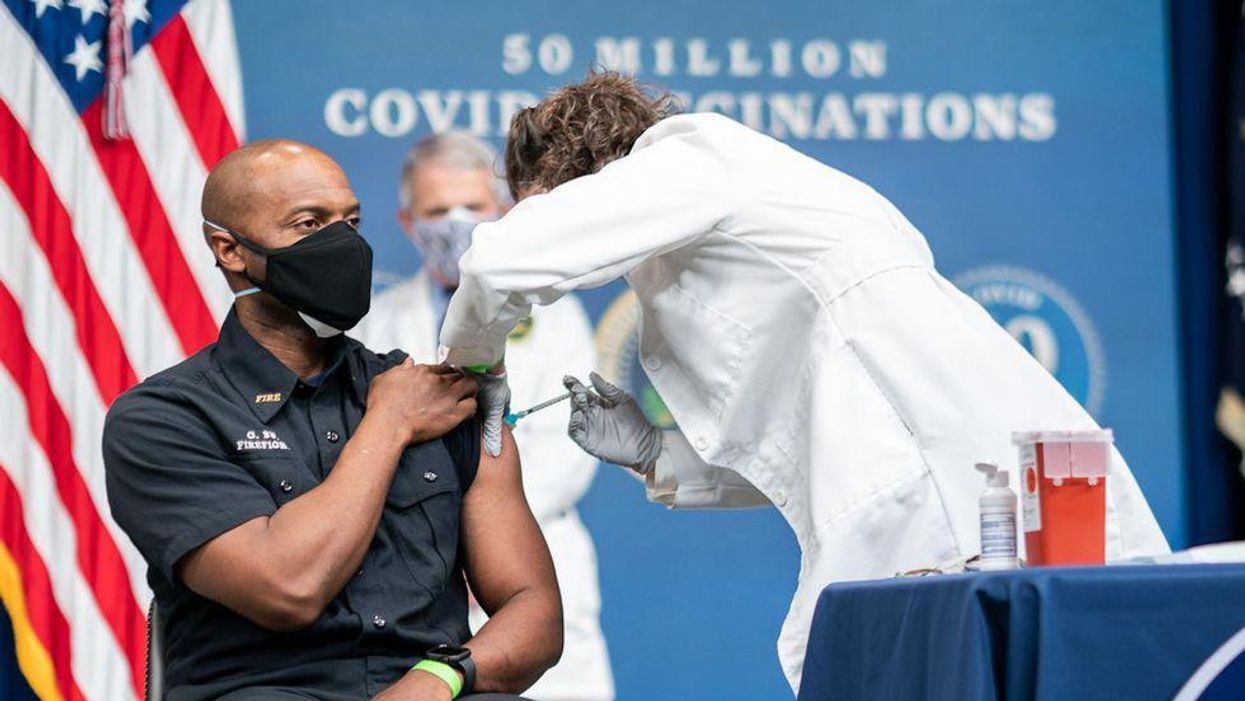 Only two-thirds of eligible people have gotten at least one dose. We've been stuck at about half a million new doses a week since June. So we're adding well under 1 percent a month to our vaccinated population while new cases have gone up 500 percent. If we're in a race between the vaccines and the variants, the variants are winning.

Now step back and look at the things that we've tried to get people to take the vaccines. From the country that conquered the moon, the genome and the microchip, is this really the best we've got? What's killing us, literally, is a stunning lack of ideas.

The mostly soft sell approaches we've tried have been weak sauce: perky public service announcements; appeals to throwback hip-hop videos and remixed country classics; hawking content on dating apps; rebranding as the "Trump Vaccine" for credulous Republicans; and doling out small prizes (lottery tickets, bonds, cash—and racing for two laps on the Talladega Superspeedway). If you're worried or downright apathetic about getting the shot, does the prospect of a $3 can of Bud really fire you up? And while psychologists assure us that the Zen of persuasion requires nodding along with people's misinformed concerns or outright lunacy, there's not a lot of evidence that this strategy is working, or that Americans are actually applying it where needed.

Meanwhile, the opposite approach of finally bringing down the hammer on the unvaccinated and calling them out—coming from sources as varied as Fox talking head Geraldo Rivera, Alabama's Republican Governor Kay Ivey and the Editorial Board's John Stoehr—is understandable, likely warranted and may even work on some. But it feels like a last resort from people who wish that they didn't have to go there.

So why haven't we tapped into American ingenuity for better options?

How do we do that? Find out who they are, figure out which of hesitancy camps they fall into and then apply the best mix of individualized tools to the persuadable to get a needle into them. Are there smarter ideas for how to do all three? You bet.

Take the first task. It's great that we know these folks are geographically concentrated in the places that voted for Donald Trump, but that doesn't really provide actionable intelligence. The idea of door-to-door canvassing to identify holdouts also has merit—and it's nice that it was successfully used in the 1940s by the March of Dimes—but this approach is also political TNT that relies on the very best of 19th-century thinking.

Meanwhile, in recent years political campaigns have developed sophisticated statistical methods to identify persuasion targets with tremendous accuracy. Plugin magazine subscriptions, zip code, what car you own, etc., and modern campaigns can know to a near certainty who you will vote for, not to mention a heck of a lot else about your behavior. Many companies develop stunningly spot-on insights into your health through similar data-chopping: Target was famously able to detect a teenager's pregnancy before her parents knew. And of course, Google and Facebook have entire world-leading business models built on detailed insights into who you are, what you think and what gets you going based on your scrolling and clicking patterns. Yet in a sea of laser-guided tools, the best idea we've seen from the government is arming church groups with clipboards and telling them to fan out across the neighborhood?

What about the second task of figuring out whether someone is persuadable at all, and what their precise hang-up is? Again, while the clipboard army is an option, there are thousands of companies using sophisticated chatbots to conduct sophisticated interactions: handle banking transactions, settle insurance claims, sell real estate and even treat depression using cognitive-behavioral therapy. A quarter of the country owns a smart speaker like Amazon's Alexa—and a full 90 percent of the country has a smartphone with "Hey Google" or Siri—both of which have the artificial intelligence to interface in complex and highly personal ways. Moreover, developers release more than 1,000 apps a day, and services like MyFitnessPal, Apple Health and even devices like Fitbit show that Americans are totally comfortable sharing personal health information with private companies through interactions with their own phones.

So clearly, the private sector has the ability to reach a vast majority and interact with them autonomously to learn about what drives their vaccine hesitation. But have we seen a wave of innovative tools rolling out through public-private partnerships?

And finally, what about the critical final step of getting people to actually show up and get the vaccine? There's an entire ecosystem of communications firms that create persuasive content on social media to hit the exact people we need to reach. We should know—we just watched the Trump campaign spend $107 million on Facebook alone to get pretty much the same folks we need to reach to show up and vote in record numbers (an act not too different in level of effort from going to get a shot).

Plus, the aforementioned app developers are constantly churning out addictive tools for health, achieving goals, taking quizzes, etc. If "wait and see" types need their concerns heard, why not a smart chatbot embedded in a fun game app that can interact, listen, provide accurate information (which three-fourths of the vaccinated find influential), answer questions, and even design an individually optimal set of persuasive inputs and available incentives to reward people for getting the shot?

Do the potentially persuadable really need to hear from a friend? Do they need to get a testimonial from a celebrity? See a video from a doctor? Get a ride or a beer or a bond? Technology can find the right pressure points for each person and apply them.

To be sure, all of this is a relatively short and unimaginative list (I confess to being a policy/politics person, not a marketing/social media technology person). If the federal government offered $100 million X-prize style to the 10 private sector companies that got the most Americans vaccinated through their own creative means, could our capitalist private sector come up with dozens of better ideas? Almost certainly.

We're in a war. Misinformation and ignorance are enemies. Innovation is the solution. We should deploy it with all the might that American ingenuity can muster.

Matt Robison is a writer and host of the Beyond Politics Podcast and the Great Ideas Podcast, both broadcast on WKXL in Concord, NH. He spent a decade working on Capitol Hill as a senior staffer and campaign manager. He now lives with family in Amherst, Mass.