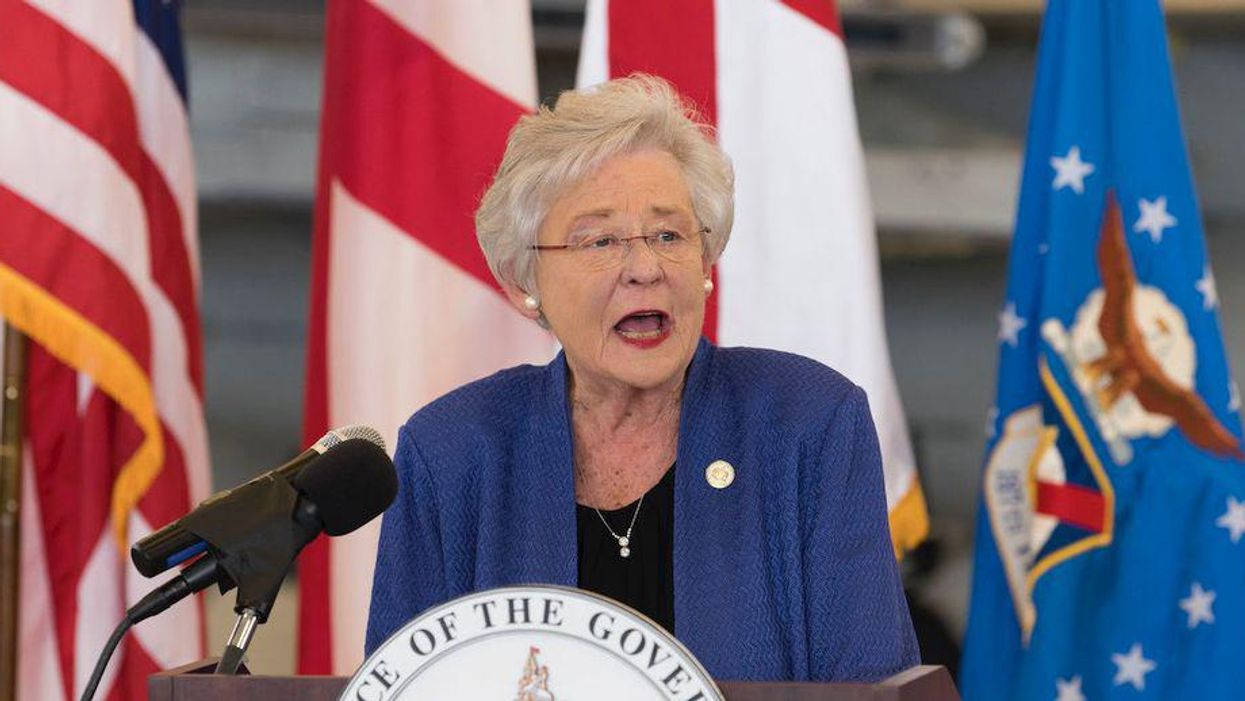 Alabama Governor Kay Ivey hosted a press conference at the 187th Fighter Wing to announce that Secretary of the Air Force Heather Wilson had selected Dannelly Field Air National Guard Base, Ala., as a preferred location for the F-35A aircraft Dec. 21, 2017, on base. Dannelly Field and Truax Field Air National Guard Base, Wis., were chosen as preferred alternatives until Wilson makes the final basing decisions after the requisite environmental analysis is complete. (US Air National Guard photo by Tech. Sgt. Chris Baldwin)
Rory Fleming
and
Filter
August 31, 2021

Representative Chris England, the chairman of the Alabama Democrats, does not mince words when it comes to former prosecutor Leigh Gwathney, the president of the Alabama Board of Pardons and Paroles, who was appointed by Governor Kay Ivey in 2019.

"What I hope is becoming as clear to you as it is to me is that Leigh Gwathney must go," Rep. England tweeted August 28. "She has almost single-handedly destroyed all of the progress we have made over the last few years. We can not make this work as long as she is in the way."

The board has only three members, and whether they choose to release people on is up to their discretion without oversight—even from the board's staff. The other two members, Dwayne Spurlock and Darryl Littleton, have past careers as a chief federal probation officer and an Alabama State Trooper, respectively.

According to a new report from the Alabama ACLU's Smart Justice Project, grants of parole to people in low-security prisons have hit "historic lows," falling by 77 percent between 2017 and 2021. Paroles from work centers fell by a shocking 93 percent.

This occurred, the report noted, "despite the state's unconstitutional prison overcrowding and the elevated risk of infection and death that incarcerated populations face from coronavirus." And it was due to "an unprecedented increase in decisions to deny parole by Alabama's parole board."

Even when parole is granted, there are serious racial equity concerns with the process. This year, about 30 percent of white applicants are being released on parole, compared with only around 10 percent of Black applicants.

Those familiar with Gov. Ivey's history of criminal justice appointments should raise an eyebrow. Back in 2016, she replaced Charles Todd Henderson—the Jefferson County (Birmingham) district attorney-elect who couldn't take office because he was charged with felony perjury due to his conduct in a child custody case—with Mike Anderton.

While Henderson ran on curbing the death penalty, Anderton, who served as a deputy prosecutor in that office, once claimed that a man with an IQ score of 56 was "faking" his intellectual disability to avoid death row; a key witness in a wrongful murder conviction was also found to have been paid $5,000 from a "private fund" run through Anderton's office.

Gov. Ivey picked Anderton over interim DA Danny Carr, who ended up running as a reformer and beating Anderton in the next election.

Gwathney graduated from law school in 2000 and spent her legal career as a prosecutor—first as a deputy district attorney in Jefferson County and then as an assistant attorney general. She made the move to the AG's office in 2014, having worked in Birmingham during the bad old days when the DA was seeking the death penalty more than virtually any other in the country—and toward the end of her tenure, only for Black men.

After Anthony Lane, a 19-year-old Black man with an IQ of 70, committed a botched robbery that led to one man's death, Gwathney personally obtained the death penalty for him in 2011. After Lane spent years on death row, the Alabama Supreme Court ruled in 2018 that he could not be executed because he is intellectually disabled, commuting his sentence to life without parole.

There were other reasons that Gwathney should have seen that seeking the death penalty for Lane was grotesque. Like so many people who end up on death row, his early years were harrowing to even read about. His mother was murdered when he was 11. When he was 14, his uncle knocked him unconscious with the barrel of a shotgun.

Gwathney's inability to see the traumas and structural factors that influence marginalized people who commit crimes has historically extended to children. She fought against the possibility of release for Evan Miller, who remains incarcerated for beating a man to death in 2003, when he was 14. Miller, who endured a difficult childhood, has now spent the majority of his young life behind bars.

When she appointed Gwathney, Gov. Ivey described her as "a proven prosecutor with an expertise and passion for the justice system." Unfortunately, Gwathney's passion is really about maximum punishment, making her a poor fit for a job that is supposed to be about mercy. Ivey would have known this perfectly well.