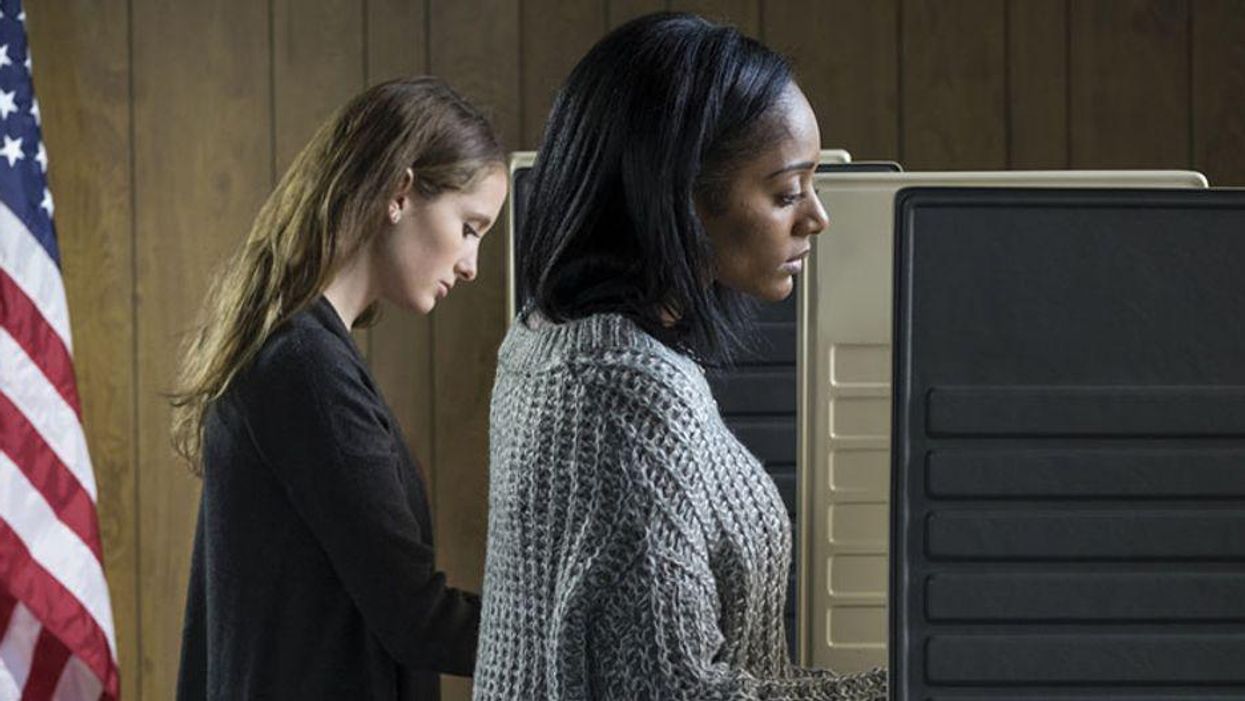 Words have actual meanings. Why do I consistently describe today's version of the Republican Party as the "Jim Crow Republican Party"? Because that political party is now engaged in a coordinated nationwide effort to keep Black and brown people from voting.

Today's Republican Party is attempting to end America's multiracial democracy and replace it with a new form of American apartheid in which Black and brown people are treated as second-class citizens in their own country. These efforts to create a whites-only fake democracy involves many of the same tactics and strategies as the original Jim Crow regime. These include onerous ID requirements, voter intimidation and harassment, limiting access to polling places, claims that some votes (by white people) are more "valuable" and of "higher quality" than others, outright vote theft and vote fraud, an attempt to create one-party monopoly rule and claims that voting is something "sacred," to be "protected" by limiting access to those deemed unworthy.

Today's Republican Party is committed to the cause of racial authoritarianism. It is a de facto white identity organization which supports political violence and terrorism as a way of obtaining and keeping political power indefinitely.

The Jim Crow regime was much more than a set of strategies and tactics designed to deny Black people their equal political rights. It was a society-wide system that sought to undermine Black people's humanity, dignity and self-worth. Today's Republican Party shares that goal.

Lonnie Hollis has been a member of the Troup County election board in West Georgia since 2013. A Democrat and one of two Black women on the board, she has advocated Sunday voting, helped voters on Election Days and pushed for a new precinct location at a Black church in a nearby town.

But this year, Ms. Hollis will be removed from the board, the result of a local election law signed by Gov. Brian Kemp, a Republican. Previously, election board members were selected by both political parties, county commissioners and the three biggest municipalities in Troup County. Now, the G.O.P.-controlled county commission has the sole authority to restructure the board and appoint all the new members.

"I speak out and I know the laws," Ms. Hollis said in an interview. "The bottom line is they don't like people that have some type of intelligence and know what they're doing, because they know they can't influence them."

Ms. Hollis is not alone. Across Georgia, members of at least 10 county election boards have been removed, had their position eliminated or are likely to be kicked off through local ordinances or new laws passed by the state legislature. At least five are people of color and most are Democrats ...

In Georgia, G.O.P. lawmakers say the new measures are meant to improve the performance of local boards, and reduce the influence of the political parties. But the laws allow Republicans to remove local officials they don't like, and because several of them have been Black Democrats, voting rights groups fear that these are further attempts to disenfranchise voters of color.

Donald Trump's allies could have gone much further toward overturning the result. As the Times puts it, "They worry that proponents of Mr. Trump's conspiracy theories will soon have much greater control over the levers of the American elections system."

Jena Griswold, the Democratic secretary of state in Colorado, describes this entire campaign as "a thinly veiled attempt to wrest control from officials who oversaw one of the most secure elections in our history and put it in the hands of bad actors. The risk is the destruction of democracy."

The Jim Crow Republicans have consistently responded by claiming that they have "no racist intent" or that Democrats are the "real racists" because they believe that black people are "too stupid" to follow new rules designed to "protect" and "secure" the vote.

Other Jim Crow Republicans have claimed, contrary to all evidence, that these new anti-democracy rules somehow make it easier for Black and brown people and other targeted groups to vote. The timing of these attacks by the Jim Crow Republican Party, which began across the Southern states almost immediately after the infamous Shelby County v. Holder Supreme Court decision and accelerated after Trump's 2020 defeat, is similarly described as a coincidence, or evidence of "paranoia" by the Democrats and "liberal activists."

The laziest Jim Crow Republicans and their mouthpieces (notably the professional Black conservatives) recite anachronistic talking points from the distant past, arguing that Democrats supported slavery and Jim Crow and that Republicans are the "party of Lincoln," which is somehow meant to exculpate the post-civil rights Republican Party from all possible white supremacist or racist motivations.

Many Republican leaders and their propagandists simply choose to lie or distort the truth about their attack on Black and brown people's voting and civil rights.

In a new essay at Mother Jones that merits extended quotation, Ari Berman locates Republican attempts to nullify the 2020 election results in Georgia relative to similar efforts during the Jim Crow regime:

There are striking similarities between the Mississippi plan of 1890 and the Georgia plan of 2021. The same pattern that existed during Reconstruction — the enfranchisement of Black voters, followed by the manipulation of election laws to throw out Black votes, culminating in laws passed to legally disenfranchise Black voters — is repeating itself today.

Trump told Georgia Secretary of State Brad Raffensperger to "find 11,780 votes" to nullify Joe Biden's victory, and Trump's lawyer Rudy Giuliani asked the state legislature to appoint its own presidential electors to overturn the will of the voters. When these efforts failed, Georgia Republicans rushed to change their voting laws to make it much easier for Republican candidates to find those votes in future elections — replacing extralegal attempts to rig the election with ostensibly legal ones.

The proponents of these laws have defended them in eerily similar ways. White Mississippians of the 1890s claimed there was nothing racist about their new constitution because it was intended "to correct the evil, not of Negro suffrage per se, but of ignorant and debased suffrage," said Mississippi Democratic Sen. James Z. George. The "understanding clause" was "an enlargement of the right to vote and not a restriction upon it," George argued, since it did not disenfranchise voters if they could sufficiently interpret the Constitution — a loophole that, in practice, existed for white people, not Black people.

Similarly, in 2021, Kemp said "there is nothing Jim Crow" about the Georgia law and argued that it "expands access to the ballot box," pointing to a provision that requires more days of weekend voting. That won't affect large counties in the Atlanta area that already offered multiple days of weekend voting but will create more voting opportunities for rural counties that lean Republican. Nor did Kemp mention the 16 different provisions that make it harder to vote and that target metro Atlanta counties with large Black populations.


The Jim Crow Republican Party's campaign against democracy is obvious to those who closely follow current events — for instance, by getting information from sources outside the right-wing disinformation machine — and who have a somewhat mature understanding of American history.

But those Americans who lack that context and information are much more vulnerable to being propagandized into believing that the Jim Crow Republican Party's attacks on Black and brown people's civil rights has nothing to do with race and simply reflects "common sense" attempts to "protect" democracy and the vote.

This attempt at historical erasure and manipulation is one reason why the Jim Crow Republican Party and its allies on the white right have created a moral panic about critical race theory, the New York Times' "1619 Project" and other attempts to teach complex truths about American history and questions of race as well as other challenging subjects.

By manipulating history to reshape understandings of the present, a type of vacuum or void is created. That space allows the white right and the neofascist movement to distort the reasons why Black and brown people and their allies are struggling to defend and improve American society by addressing the country's many forms of injustice and inequality.

Ultimately, these battles over American memory and the color line are questions about truth, power, accountability, democracy, freedom and justice. In a new essay at his website, historian Timothy Snyder explains how American democracy is imperiled by the Jim Crow Republicans and their allies' attacks on any approach to history that speaks back to power instead of serving its interests. Snyder offers these warnings:

The studying or teaching of history is not supposed to leave us feeling validated or safe. History can be upsetting and enraging. Studying history is not a therapeutic tool meant to make you happy or proud, or to inflate your ego or that of your social group or nation. Those who approach the study of history with those motivations are looking for propaganda instead of truth about the past and its lessons for the present and future.

That outcome is of course what Jim Crow Republicans and other neofascists desire with their appeals to "patriotic education" and their attempts to censor, manipulate and otherwise distort American history and public memory such as by eliminating "inconvenient" or "divisive" facts.

As the truism warns, those who control the past control the future. In their war against American democracy, the Jim Crow Republicans and their allies and followers have taken those words as a battle cry. Unfortunately, Democrats are, as usual, being outmaneuvered. Their defeat may also mean the demise of American democracy. If that happens, how will America's history be written by the victors?