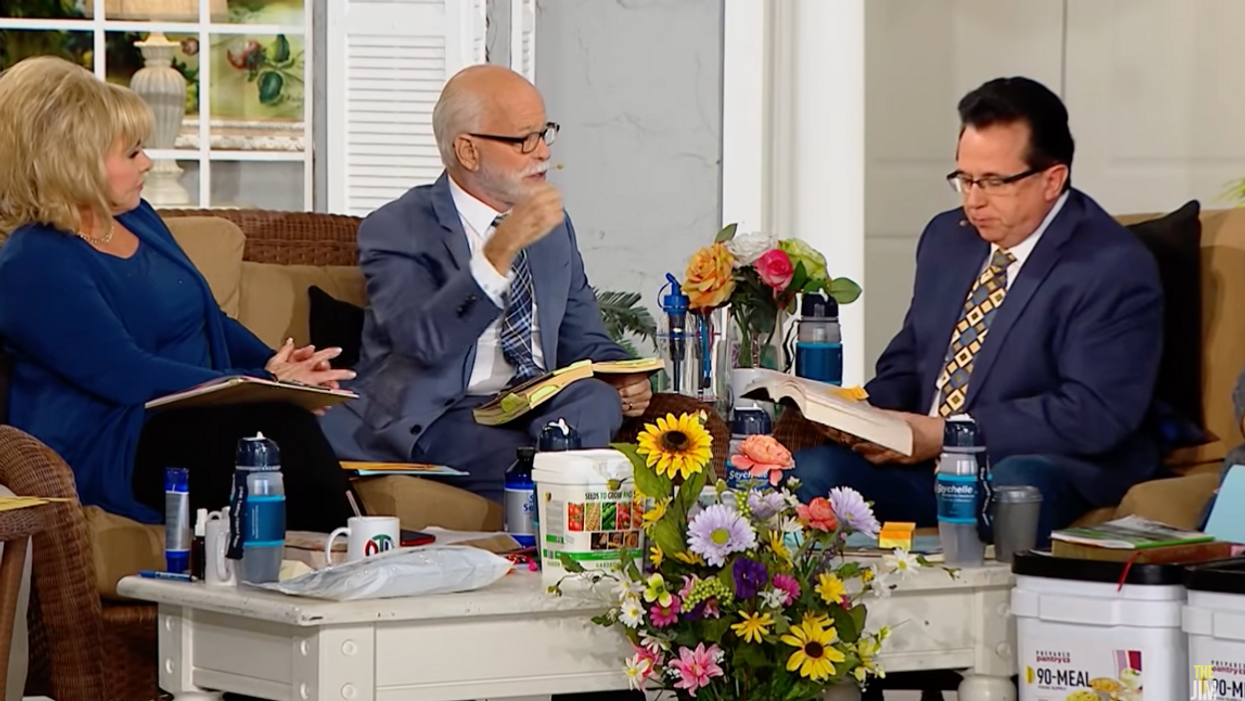 Apocalypse-pancake purveyor and disgraced mammal Jim Bakker is not feeling the Biden era. Bakker, who was convicted on 24 counts of fraud in 1989 over his role in the wide-ranging PTL scandal, thinks we've "slidden" backwards since those halcyon days when Donald Trump's sudoriferous arse was regularly irrigating the linens in the presidential boudoir.

Of course, the nice thing about using a Christian template for your con is that one of the religion's core tenets is forgiveness. Don't get me wrong, that's a noble feature. The problem is, it's really fucking easy to turn repentance into a vaudeville act without ever actually, you know, repenting.

Bakker is always chock full o' nuts, of course, but sometimes he's a humble Almond Joy and sometimes he's an incandescent Hindenburg crammed with forests full of squirrel shit. Today was such a day.

BAKKER: "You realize this is coming, right? You realize where we are. You realize what America has done. Does it scare you that America would be so strong in turning their backs on God? It just drives me crazy to see this happen in our country. I felt like the last year we were doing pretty good in America. Of course, COVID hit and all that kind of stuff. … Do you think we have, in the last few months, since the election, America has, if we were in a religious forum, we would say backslid. America has slidden [sic] backwards more than in my entire lifetime, and I'm 81 years old."

Eighty-one years old, huh? So that means he was born in 1940. I don't know, I can think of at least one setback that happened in December of the very next year. And then there was that whole Vietnam kerfuffle. And Watergate. And the Great Recession. And, you know, that shit from last year. CO-something. That was a wee bit of a backslide, don't you think?

Or is Bakker talking about the recovering economy ... or the receding COVID-19 pandemic ... or the fact that we no longer have a literal insurrectionist in the White House? Yeah, I can see why he'd be so upset.

Jim Bakker and his southwestern Missouri church will pay restitution of $156,000 to settle a lawsuit that accuses the TV pastor of falsely claiming a health supplement could cure COVID-19.
Missouri court records show that a settlement agreement was filed Tuesday. It calls for refunds to people who paid money or gave contributions to obtain a product known as Silver Solution in the early days of the pandemic.
The settlement also prohibits Bakker and Morningside Church Productions Inc. from advertising or selling Silver Solution "to diagnose, prevent, mitigate, treat or cure any disease or illness." Bakker, in the agreement, does not admit wrongdoing.

Ah, yes, Jim Bakker's magic silver solution. Sure, you can be 100% healed through the power of prayer, but why not hedge your bets by coating your arteries with a heavy metal that only occasionally turns people into bulgy Smurfs? What would Jesus do? Oh, he'd almost certainly seize control of the FDA and immediately approve all of Jim Bakker's quack cures.

I'm not quite sure what Joe Biden has done to earn the wrath of the official pancake vendor of the omniscient, immanent, ineffable godhead, but I doubt Bakker has many specifics. Not any that hold up under scrutiny, anyway.

But then Bakker will keep grifting until the day he dies—or turns into Violet Beauregarde. Whichever comes first.