Why the GOP still can't quit the confederacy 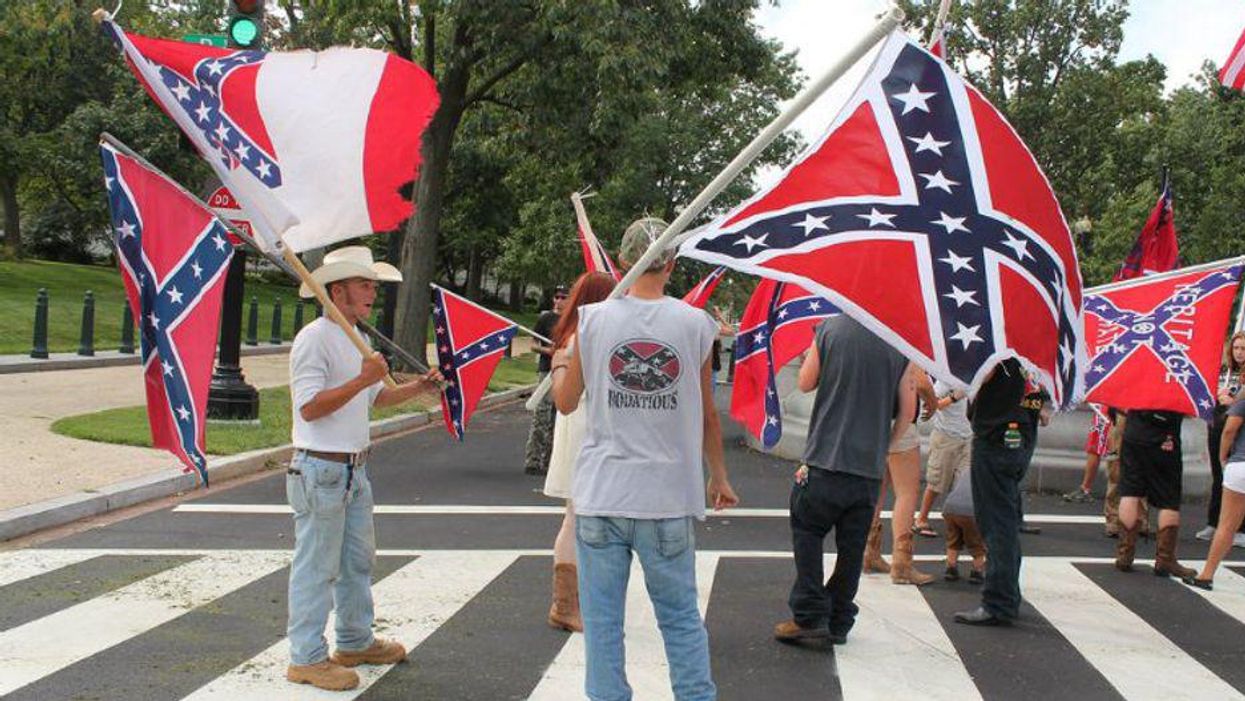 Ricky Davila is a musician with a big Twitter following. When he's not talking about songwriting, he's talking about politics. Last night, Davila said: "The same racists who continue to criticize Black athletes, like the King LeBron James, for speaking out or for peacefully protesting, like Olympian Gwen Berry and Colin Kaepernick, are those who support sedition, treason, insurrection, using flags as weapons to injure police." In response, MSNBC's Joy Reid said: "What, I wonder, is the connective tissue here?"

It's not clear what Reid was hinting at with her monocle-sporting emoji. If I had to guess, I'd say she meant racism ties these factors together. If so, I'm less than satisfied. I don't think racism fully captures what's happening in this country. It certainly doesn't explain why 147 Republicans voted to overturn the results of the election after the former president's paramilitaries sacked and looted the United States Capitol. It doesn't fully explain why the Senate Republicans blocked legislation creating an independent, bipartisan commission to investigate. To be sure, racism is central. It can't be avoided. But even the racists among us can be scandalized by the sight of support for "sedition, treason, insurrection, using flags as weapons to injure police."

So how do we explain the paradox more thoroughly? How can some white people criticize hammer-thrower Gwen Berry, who stepped away from the flag Saturday while the national anthem played during Olympic trials in Oregon, while being jim-dandy with the former president continuing to lie about losing the election? How can some people, more specifically, be outraged by perceived disrespect of local police but be unmoved by the fact of a Capitol cop dying to protect the Congress? You could say, as a lot of people say, that this is plain-old cognitive dissonance. Some white people are able to believe two contradictory things at the same time without much discomfort. That's fine, but it relegates politics to the realm of the private and the therapeutic.

In any event, "cognitive dissonance" doesn't satisfactorily explain why 120 Republican members of the United States House of Representatives voted last night against removing from the Capitol statues memorializing members of the old Confederacy. The Confederates were literal traitors. The Confederate States of America invaded the United States in an attempt to replace (an increasingly) democratic republic with a feudal slave regime. To give Confederate "heroes" a place of honor is, at the very least, to recognize legitimacy where there should be contempt. And yet 120 Republicans went on record to say these traitors were actually commendable and worth honoring.

That touches on what's going on more fully and more satisfactorily, I think. While the Confederate States of America are blessedly dead, the idea of a confederacy lives on to such a degree that lots of Americans, whether in the South or elsewhere, act like they are still living in it and will, buh Gawd, insist on living in it. This confederacy of the mind and spirit is where "real Americans" are chosen by God to rule this country in His name. As long as democracy moves in their direction, everything's jake. When it moves against them, however, as it did in 2008, democracy is no more deserving of deference than it was in the run up to the Civil War. The constitutional order itself is forfeit. The president can form a secret police. Republican governors can order armies to the border. GOP legislatures can outlaw acts of free speech, free thought and free inquiry. These are permissible, to the neoconfederates, because democracy has betrayed them.

It's often suggested that anti-racism—wokeness, as some call it—is somehow anti-American. It is often suggested that it's somehow unpatriotic. To kneel during the national anthem in protest of the way Black Americans and Americans of color are treated by law enforcement, for instance, is seen as intolerable. It "disrespects" the flag. But former NFL quarterback Colin Kaepernick wasn't just protesting police brutality. He was demanding the rights to equality and equal justice that are his to demand. That's the real point of conflict but it's not clear unless you see it through the lens of the confederacy of the mind and spirit. Anti-racists like Colin Kaepernick are not anti-American. They are all-American. His critics aren't outraged because he's unpatriotic. They're outraged because his anti-racism is exquisitely patriotic. The last thing a neoconfederate is going to do is share the republic with the "illegitimate."

My point is racism doesn't explain why the same people criticize Black athletes for "disrespecting" the flag while also supporting a goddamn insurrection. The confederacy of the mind and spirit, however, does. It makes everything clearer. Moreover, racism alone obscures a critical nuance: the difference between loyal Americans and disloyal Americans, the difference between people who stand for liberty and justice for all, despite being racist, and those ready to go to war with equality, because they are racist. Lots of racists hate anti-racism, but they aren't going to abandon democracy. Other racists, however, will abandon democracy, because they're too entitled to share.